Hate crimes in US cities jump to levels not seen in decades, study finds 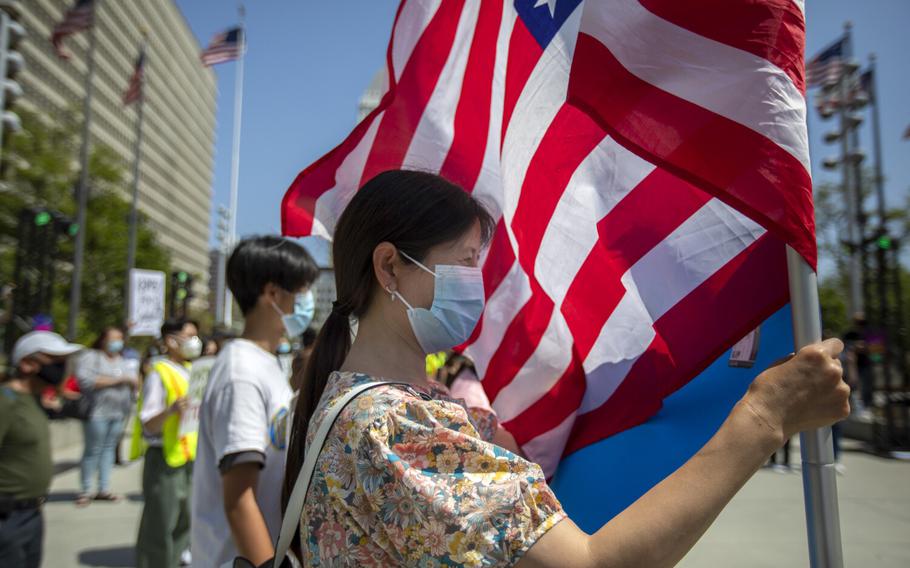 Jan Liu holds an American flag in Grand Park as she is participates in a Youth Against Hate rally in light of anti-Asian violence and hate crimes on Saturday, May 8, 2021, in Los Angeles. (Francine Orr, Los Angeles Times/TNS)

Data gathered by the Center for Hate and Extremism at Cal State San Bernardino show there were 615 hate crimes reported to police in Los Angeles city in 2021 — the third-highest annual total in any U.S. city since the 1970s.

Incidents targeting Black people in Los Angeles were the most common and jumped 91% over 2020, the study concluded. While Black residents make up about 8% of the city's population, they were the reported targets in 148 alleged hate crimes — a rate nearly triple their share of the population.

In most other large cities, Black people were also the most targeted group. An exception was New York City, where Jewish people were victimized most frequently.

"The invective on the internet of hate is being followed by vile acts on the streets," Brian Levin, the Center's executive director, said in an interview.

Other major cities across the U.S. also saw sharp increases in reported hate crimes, the center found. The number of reported incidents in New York City nearly doubled over the 2020 tally, to 538 cases, and doubled in San Francisco, to 112. San Jose saw a 29% increase and San Diego rose from 25 reported crimes in 2020 to 46 last year.

Those increases marked a continuation of a national spike in hate crimes in 2020. The FBI collected data from police departments across the country and tallied 8,263 reported hate crimes in 2020 — a 13% jump over 2019. The count was the highest since 2001.

Dallas, San Diego and San Francisco had their highest annual totals in more than a decade, he added. Other cities such as Chicago, Phoenix and Sacramento were not included in the center's analysis because their figures were incomplete.

The increases came on the back of the unsettling spike in racially driven hate crimes reported in 2020 as the country was roiled by the coronavirus pandemic and the murder of George Floyd by a Minneapolis police officer.

A breakdown of L.A.'s soaring numbers showed that along with the anti-Black incidents, members of the city's LBGTQ communities were targeted in 132 alleged crimes, Latinos were the focus of 101 cases, and 80 antisemitic cases and 41 anti-Asian incidents were reported to police.

The cases involving Asians in Los Angeles marked a more than doubling over those in 2020 and reached levels not seen since the 1990s, Levin said. The jump reflected a sharp rise nationally in reported hate crimes against Asians.

The figures continued a troubling trend from 2020, a year in which the FBI data showed a 73% increase in the number of hate crimes against Asians.

Levin cautioned that the increases recorded by the LAPD could be partly a result of the department's efforts to improve how it investigates alleged crimes in which the suspect is driven by racial animosity or some other bias. The LAPD, Levin said, should be viewed as a model for other large city police departments.

About 85% of police departments in the U.S. typically report no hate crime incidents, an indication that the true scope of the crimes is significantly greater than what national figures show, Levin said.