Rents are up 40% in some cities, forcing millions to find another place to live 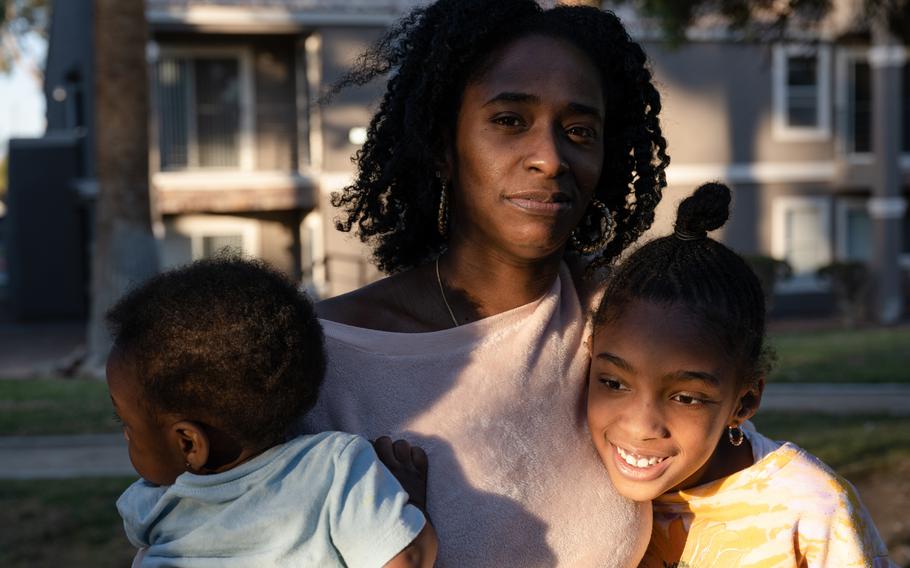 Kiara Age and her children, Kaiden Jones, 8, and Kobe Jones, 1, outside their home in Las Vegas. (Bridget Bennett/For The Washington Post)

Kiara Age moved in less than a year ago and now it's time to move again: Rent on her two-bedroom apartment in Henderson, Nevada, is rising 23% to nearly $1,600 a month, making it impossibly out of reach for the single mother.

Age makes $15 an hour working from home as a medical biller while also caring for her 1-year-old son, because she can't afford child care. By the time she pays rent — which takes up more than half of her salary — and buys groceries, there's little left over.

"I am trying to figure out what I can do," said Age, 32, who also has an 8-year-old daughter. "Rent is so high that I can't afford anything."

Rental prices across the country have rising for months, but lately the increases have been sharper and more widespread, forcing millions of Americans to reassess their living situations.

Average rents rose 14% last year, to $1,877 a month, with cities like Austin, New York and Miami notching increases of as much as 40%, according to real estate firm Redfin. And Americans expect rents will continue to rise — by about 10% this year — according to a report released this month by the Federal Reserve Bank of New York. At the same time, many local rent freezes and eviction moratoriums have already expired.

"Rents really shot up in the second half of 2021," said Daryl Fairweather, chief economist at Redfin. "The pandemic was kind of a pause on the economy and now that things are reopening, inflation is picking up, rents are going up and people are realizing they don't have as much disposable income as they might have thought they had."

Higher rent prices are also expected to be a key driver of inflation in coming months. Housing costs make up a third of the U.S. consumer price index, which is calculated based on the going rate of home rentals. But economists say there is a lag of 9 to 12 months before rising rents show up in inflation measures. As a result, even if inflation were to subside for all other components of the consumer price index, rising rents alone could keep inflation levels elevated through the year, said Frank Nothaft, chief economist at real estate data firm CoreLogic.

While the Federal Reserve's likely interest rate increases are expected to slow soaring housing costs — already mortgage rates have been trending higher, which tends to cool the real estate market — the restraint on rental prices is expected to be much less direct and take longer to filter through.

In the meantime, the Biden administration has begun reallocating unused funds from its $46.5 billion Emergency Rental Assistance program to help residents with rent and utility payments in cities such as Washington, D.C., Houston and San Diego. President Joe Biden has also vowed to add nearly 100,000 affordable homes over the next three years by providing low-cost funding to qualifying developers, and encouraging states and local governments to reduce zoning and financing rules for affordable housing. 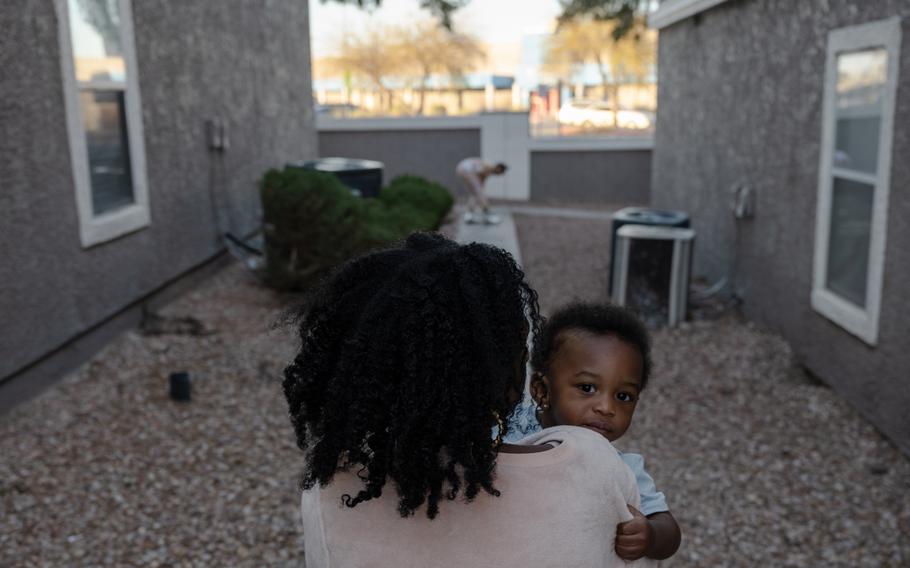 Kiara Age carries her son Kobe Jones, 1, around her apartment complex in Las Vegas. Age was notified the rent of her two bedroom apartment would increase over 20%, she now struggles to find affordable housing in Las Vegas's rental market. (Bridget Bennett/The Washington Post)

The pandemic has exacerbated inequalities in many parts of life, and housing is no different. Homeowners benefited from rock-bottom interest rates and surging home prices, while renters have faced surging costs with little reprieve. And unlike markups in other categories — such as food or gas, where prices can waver in both directions — economists say annual leases and long-term mortgages make it unlikely that housing costs will come back down quickly once they rise.

Eleven million households, or 1 in 4 renters, spend more than half of their monthly income on rent, according to an analysis of 2018 census data by Harvard University's Joint Center for Housing Studies, though experts say that figure is likely even higher now.

"The fact is, for too many Americans, housing is unaffordable," said Dennis Shea, executive director of the J. Ronald Terwilliger Center for Housing Policy at the Bipartisan Policy Center. "We have an inadequate supply of homes — for both rent and for sale — and of course the lowest income families are being hit hardest."

In interviews with renters around the country, many said their monthly payments had recently risen or were set to go up in the coming weeks. Multiple people said that despite local rent freezes, their management companies had found ways to increase monthly dues by tacking on new "amenity fees" or charging for services like trash collection that had previously been included.

Many said they began looking for other rental options, only to find that everything around them had gone up in price, too. Some said they're considering relocating altogether — from Austin to Richmond, or New York City to Dover, Del.

Aleksei Valentín and his husband, both doctoral students, recently downsized from a one-bedroom apartment in Frederick, Md., to a studio a neighboring county in search of lower rents. Their previous building repeatedly hiked amenity fees during the pandemic, Valentín said, adding about $200 in extra charges to their monthly rent of $1,290. That apartment is now on the market for $1,600.

"First the fees started going up, and then we started getting notices that if we didn't put our trash out exactly like they liked, we'd have to start paying fines," said Valentín, 39. "The more people moved out, the more the amenity fees went up."

There were other problems too but the final straw, he said, came when the company removed the dumpster closest to his apartment. Valentín, who is in a wheelchair, said he had to travel a quarter-mile to dispose of his trash. Now he and his husband pay $1,400 a month and said they were deliberate about moving to a county with strong tenant rights laws.

Like many millennials, the 30-somethings say home-ownership feels increasingly out of reach. They have student loan debt and little in savings. Even buying a tiny house "feels like a pipe dream," Valentín said.

"Prices are so high, inflation is astronomical, and the house my parents bought for $30,000 in the late '70s is worth over half a million today," he added. "How can [we] enter into that market without intergenerational wealth? It's impossible."

The share of first-time home buyers has dropped to its lowest level in eight years, according to the National Association of Realtors. The group estimates that nearly 1 million renters were priced out of the housing market last year because of rising real estate prices and increased competition from wealthier, all-cash buyers.

Homes were in short supply even before the pandemic, particularly for low- and middle-income families. In 2020, the market added just 65,000 entry-level homes, those smaller than 1,400 square feet, compared with roughly 400,000 a year in the late 1970s, according to federally chartered mortgage investor Freddie Mac. As a result, more families are renting longer.

Desiree Tizon, a 29-year-old social media manager in Miami, was shocked to find that rent for her two-bedroom apartment on the waterfront is jumping 39% to nearly $3,700 a month in March. She's not sure whether she and her boyfriend will move or stay, but said the higher cost cuts into any hope of saving up for a down payment.

"I began looking around Miami, and it turns out all rent prices are up a ton," she said. "We're not finding anything reasonable or even comparable to our unit. Maybe we'll find a place that's $200 cheaper but is it worth the hassle of moving all of our things?"

She and her boyfriend, who works in tech, both got higher-paying jobs during the pandemic. They could technically afford the extra $1,000 a month, she said, though it doesn't feel right on principle.

"If we had enough money for a down payment, we could put that into a mortgage," she said. "But now with higher rent, we're stuck in this rat race for that much longer."

Early in the pandemic, Americans, especially those who could work from home, moved from cities to suburbs or bought second vacation homes in search of more space. Low interest rates and booming demand lifted housing prices to record highs. Apartments, meanwhile, were left to grapple with mounting vacancies and began offering perks like free parking, $500 gift cards, even Peloton bikes and TVs, in exchange for long-term leases.

But as the economy reopened and people headed back to cities, apartments began filling back up. Now, with home prices and mortgage rates both on the upswing, rentals are in high-demand again, giving landlords room to start asking for more money, said Fairweather of Redfin. Shadow LaMere and Brandi Kalinowski packing things up in their living room before they move out of their Austin apartment. Their rent went up 43% this year. (Salihah Saadiq/The Washington Post)

In Austin, Shadow LeMere is moving her belongings to storage and preparing to live in her car until she can find an affordable apartment. Rent on the two-bedroom she shares with her wife is set to rise 43%, from $1,500 a month to about $2,200, in early February.

She and her wife are planning to drive to Georgia to drop off their cat, Ziggy, with a friend. After that, they'll make their way up the East Coast in their Kia Soul until they find a cheaper place to settle down.

"We were pretty much existing on fumes before this," the 49-year-old said. "And now it's gotten so much worse."

LeMere, who used to work as an accountant, receives $900 a month in disability benefits. Her wife, Brandi Kalinowski, spent a decade as an auditor for a national grocery chain but quit last week in anticipation of the move.

The apartment building where they've lived for seven years typically raises rents by about 6% a year, LeMere said. But this year's massive jump has left many residents in dire situations. It's become common, she said, to see piles of people's belongings in the parking lot for nonpayment of rent.

"We can't afford to live here anymore," she said. "Not in Austin, not in Texas. We're going to nomad it for a bit and see where we end up."

The Washington Post's Andrew Van Dam contributed to this report.