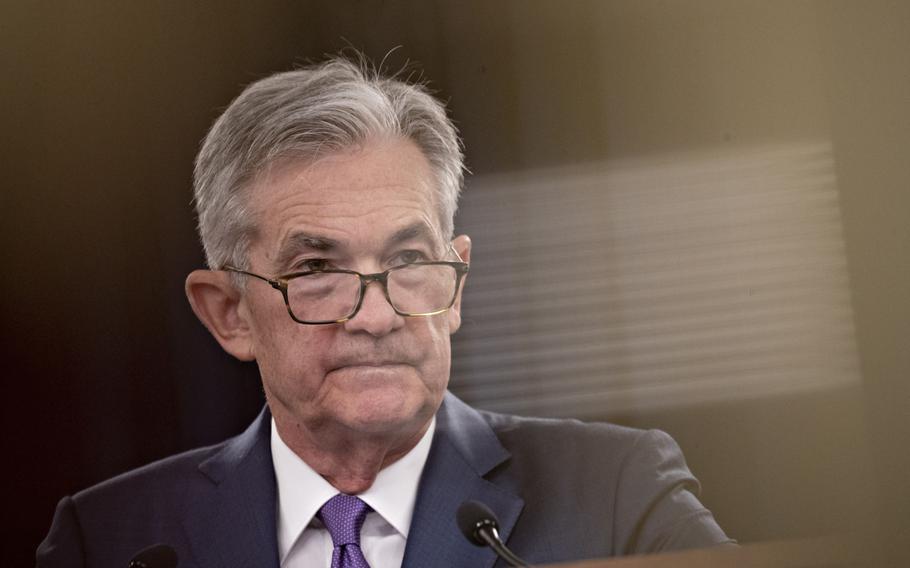 Jerome Powell, chairman of the U.S. Federal Reserve, pauses during a news conference following a Federal Open Market Committee meeting in Washington, D.C., on July 31, 2019. Powell promises that the Fed will be “nimble” in the months to come, willing to adjust as fresh data changes the outlook. (Andrew Harrer/Bloomberg)

Only once before now has the 108-year-old Federal Reserve faced a moment when it needed to raise interest rates from near zero to meet the threat of rising prices.

But that 2015 episode, in which the Fed began lifting rates when consumer prices were increasing by a barely perceptible 0.5% annually, offers few clues about how the nation’s central bank will attack today’s 7% inflation, the highest since 1982.

Fed Chair Jerome Powell has begun preparing Americans for the prospect of higher borrowing costs as soon as March. Speaking to reporters after the latest Fed policy meeting, he went out of his way to distinguish today’s challenge from the Fed’s last rate-hike cycle. Growth and inflation both are much higher now than in 2015, while the unemployment rate is lower, all signs of a hotter-running economy that will make the Fed’s mission trickier.

“This is a very different expansion. ... And I think those differences are likely to be reflected in the policy that we implement,” Powell said.

If the Fed misjudges the situation, the consequences could be dire. Raise rates too much, too fast and the central bank could drive the economy into another recession. Raise them too little and inflation might tighten its grip on the $23 trillion U.S. economy, saddling households and businesses with higher bills.

Powell promises that the Fed will be “nimble” in the months to come, willing to adjust as fresh data changes the outlook.

Indeed, his repeated allusions to the distinctive nature of the current expansion signaled that investors should forget the slow-motion playbook the Fed used seven years ago. After raising rates by a quarter-percentage point in December 2015, the central bank waited a full year before acting again.

Unlike in 2015, when Fed officials vowed a “gradual” approach, Powell in recent days left open the chance of a rate increase at each of the Fed’s seven remaining meetings this year. He also refused to rule out increases of half a%age point rather than the quarter-point moves investors had anticipated.

“The Fed is a small ‘c’ conservative institution. Its goal is never to surprise people,” said Claudia Sahm, the director of macroeconomic research for the Jain Family Institute and a former Fed economist. “The Fed itself is feeling its way through this.”

So are investors. On Friday, J.P. MorganChase said it now expects the Fed to raise rates five times this year rather than four, saying Powell’s remarks were “clearly intended” to signal a quicker response.

The Fed in 2015 acted preemptively to prevent inflation from reaching the central bank’s 2% annual target, even though the economy was not yet at full employment. This time, under a policy framework adopted in August 2020, Powell allowed inflation to overshoot the goal before he entertained talk of higher rates.

Amid a still-virulent pandemic, the Fed must raise its benchmark lending rate from near zero quickly enough to prevent consumer expectations of runaway price increases from hardening — and it must do so without crashing the economy.

“This Fed is just in a completely different position now,” said Narayana Kocherlakota, a former regional Fed bank president. “They’re going to be more proactive ... This is a very difficult moment.”

The dangers are real. On Friday, the Bureau of Labor Statistics said a key measure of employee compensation rose at an annualized 4% in the last three months of 2021, the fifth consecutive quarterly increase and a sign that workers are demanding better pay to keep pace with higher expenses.

Raising interest rates, which discourages borrowing, is intended to slow the economy, which in turn should ease inflation. But making auto loans and home mortgages more costly carries its own risks. Most recessions since World War II followed Fed rate-hike campaigns.

The Fed’s current stance differs from 2015 because the economic recovery this time has been so much faster and stronger than after the 2008 financial crisis.

After the two-month pandemic recession, it took less than two years to get the unemployment rate back below 4%, a mark that eluded the post-2009 recovery for more than nine years.

When then-Fed Chair Janet Yellen gathered her policymaking committee for a two-day meeting in mid-December 2015, financial markets expected action. Although inflation remained subdued, that was largely due to sharp declines in energy prices that Yellen expected would fade.

More than six years into the recovery, the economy had grown at an annualized rate of 2.25% over the first three quarters of 2015 and was producing 220,000 jobs per month. Fed officials forecast an inevitable price jump if rates were not increased.

Yet, through the first 10 months of the year, the change in the consumer price index had rounded to zero. As the committee debated, Yellen acknowledged that central bankers needed “to explain why, at a time when inflation is low and we’ve not overshot our employment goal, we would be raising rates,” according to a Fed transcript of the session, released earlier this month.

That Fed meeting came at the end of an unprecedented experiment in monetary policy. In 2008, as a collapsing housing bubble threatened to take the financial system down with it, the Fed for the first time ever cut its key interest rate to near zero and held it there for the next seven years.

The unconventional approach drew opposition from congressional Republicans, who predicted runaway inflation and the debasement of the currency. Neither happened. But the subsequent economic recovery proved to be the weakest on record, with anemic growth of just 1.5% over those seven years.

But with the economy looking better in 2015, Yellen worried that the Fed needed to get rates off the “zero lower bound.” If it failed to do so before the next recession, it would be unable to use its primary weapon — rate cuts — to pull the economy out of a downturn.

“With interest rates at zero, we have less scope to respond to negative shocks,” Yellen told reporters after the meeting.

Powell, then a Fed governor, backed the 2015 hike, although he cautioned “that for the next couple of years, economic weakness around the world will mean that the Committee can and should remove accommodation only gradually.”

In hindsight, several current and former Fed officials have suggested, the 2015 rate increase was a mistake. The unemployment rate, which was 5% when officials decided to act, ultimately fell to 3.5% before the pandemic without inflation becoming a problem.

“What’s interesting about this cycle is both the federal reserve and the federal government set out to eradicate the mistakes they made in the previous cycle,” said Kathy Bostjancic, Oxford Economics’ chief U.S. financial economist, referring to Powell’s patience and the nearly $6 trillion of pandemic aid approved by Congress.

Throughout much of 2021 — as critics such as former treasury secretary Lawrence Summers warned of an escalatory spiral — Powell insisted that inflation would prove “transitory.” In a late-August speech at the Fed’s annual conference in Jackson Hole, Wyo., he said the problem was confined to goods most affected by the pandemic closings and reopenings as well as by supply chain issues.

In late November, with inflation running at more than twice the Fed’s annual target for price stability, Powell told Congress he was abandoning the term.

After arguably moving too soon against potential inflation in 2015, the Fed now is fielding complaints that it moved too late against the real thing.

“The mistake was waiting this long,” said former Fed economist Michael Strain of the American Enterprise Institute. “The risk of something abrupt happening is higher.”

The pandemic’s unpredictable impact on workers and employers means investors and consumers could be in for an unusually bumpy ride this year as the Fed adjusts its stance. Many investors are fixated on trying to predict the Fed’s next move, which has led to tremendous swings in stock prices in recent trading.

The Dow Jones industrial average has lost about 7% after hitting an all-time high on Jan. 4, one day before minutes of the Fed’s December meeting were made public showing that officials believed rates might be increased “sooner or at a faster pace” than first planned.

Years of crisis fighting also have left the Fed with nearly $9 trillion of assets on its balance sheet, bonds it purchased to keep long-term borrowing costs lower. With its holdings now equal to about 38% of economic output, up from 24% in 2015, the challenge of weaning the economy from central bank support is only more complex.

“I don’t think it’s possible to say exactly how this is going to go,” Powell acknowledged Wednesday. “... The economy is quite different this time.”