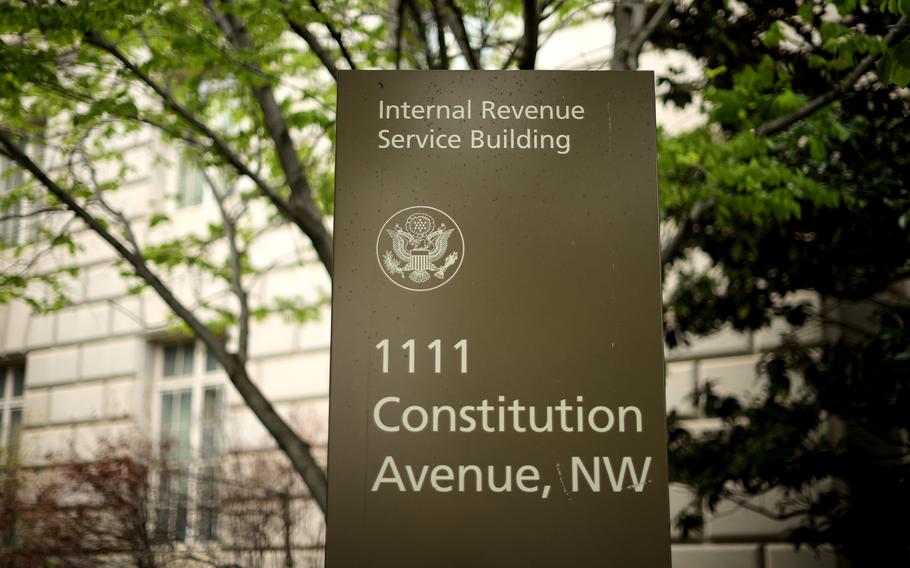 The Internal Revenue Service headquarters building on April 27, 2020, in the Federal Triangle section of Washington, D.C. While Democrats have focused heavily on ramping up enforcement to bring in more tax dollars, another filing period complicated by the COVID-19 pandemic, new tax breaks meant to provide relief from the crisis and a lengthy backlog of unprocessed returns is putting the spotlight on years of stagnant funding for taxpayer services. (Chip Somodevilla, Getty Images/TNS)

WASHINGTON (Tribune News Service) — Anticipation of a fraught tax season is leading Democrats to consider more funding for the IRS to assist and educate taxpayers.

While Democrats have focused heavily on ramping up enforcement to bring in more tax dollars, another filing period complicated by the COVID-19 pandemic, new tax breaks meant to provide relief from the crisis and a lengthy backlog of unprocessed returns is putting the spotlight on years of stagnant funding for taxpayer services.

Democrats proposed an infusion of $80 billion in extra funding for the IRS over the next decade — including almost $3.2 billion for taxpayer services in the Senate version of their sweeping budget reconciliation bill. But that measure’s been held up amid intraparty discord over benefits and programs in the package.

That leaves delayed fiscal 2022 appropriations as likely the fastest and surest way to infuse the department with more cash as lawmakers work across the aisle toward an omnibus spending bill. They’re aiming to finish before temporary government funding runs out Feb. 18, though another short-term stopgap bill may be necessary.

Maryland Democrat Chris Van Hollen, who leads the Senate Appropriations subcommittee responsible for the IRS budget, said the panel is considering funding for the agency above the $13.6 billion panel Democrats proposed in October. “I would like to see taxpayer services get a bigger boost because of exactly the kind of backlog we’re in,” Van Hollen said.

The IRS had a backlog of more than 11.8 million unprocessed tax returns and 4.75 million pieces of taxpayer correspondence as of mid-December, according to the National Taxpayer Advocate’s Jan. 12 report.

The vast majority of phone calls went unanswered and some returns were delayed for months, wrote National Taxpayer Advocate Erin M. Collins, who described 2021 as the most challenging tax year yet and predicted problems will persist.

IRS staffing has fallen by about 17 percent since fiscal 2010 while the number of individual and business tax returns climbed by 13 percent, according to the report. Treasury officials have said the pandemic closed facilities, caused staff to take leave from their jobs and spurred new aid programs like advance monthly child tax credits and relief checks that put a bigger burden on the IRS.

Collins’ primary recommendation to address the problem is a bigger IRS budget paired with more oversight. Center for Taxpayer Rights Executive Director Nina Olson, who served as taxpayer advocate for two decades, concurs. She said taxpayer services has been chronically underfunded, both due to politics and a poor job by the IRS forecasting their needs and advocating for more staff to answer phones and resolve errors.

Along with a bigger budget, Olson said she wants to see the IRS share a clear and detailed plan for the funding to show the agency will solve problems that existed long before the pandemic crisis exacerbated them.

“I don’t want them to be finally given some money and then blow it, you know, because they don’t have a good plan,” she said. “Because then they will never get the money again.”

It’s unclear if Republicans would get on board with that level of funding. Top Senate GOP appropriator Richard C. Shelby of Alabama described the boost as among “partisan ‘reforms’” in the Democrats’ proposal.

Democrats’ COVID-19 relief package, enacted last March, included $1.86 billion for “necessary expenses for the Internal Revenue Service” including administration of advance payments, taxpayer assistance and information technology upgrades. Republicans asked Rettig to explain why over $1.4 billion of that supplemental funding hadn’t been spent yet, adding that a failure to hire more customer service representatives was due to a weak job market and lack of applicants.

Asked about getting Republicans on board with higher IRS funding, Van Hollen said: “I would hope everybody wants to make sure people get their money back as quickly as possible.”

But when senators did so, they envisioned it coming on top of the $3.2 billion over 10 years included in the budget bill.

The party largely agrees on increasing IRS funding. Earlier this month, Sen. Dianne Feinstein, D-Calif., called on Biden and Appropriations Committee leaders to send emergency funding to the IRS in anticipation of this filing season’s challenges and impasse on the budget package. Feinstein wrote that a supplemental bill “would be a timelier way to help the IRS rebuild its capacity to efficiently process taxpayers’ returns, refunds, and questions.”

On Thursday, Sens. Elizabeth Warren of Massachusetts and Jeff Merkley of Oregon led a letter with 13 fellow Democrats asking the Treasury Department to keep working with Congress on increased IRS funding and to propose a budget boost for fiscal 2023 at least as big as the 14 percent jump the administration sought for fiscal 2022

Van Hollen’s House counterpart, Rep. Mike Quigley of Illinois, said in a statement that it’s “imperative” to boost IRS funding for taxpayer services along with other functions like enforcement.

Senate Finance Chair Ron Wyden of Oregon predicted that senators will return to Washington after this week’s recess with evidence of the problem.

“They’ll be talking about what they heard at home, which is people can’t get through, they can’t get the services, and that’s what we need,” Wyden said. “I hope that people want to work on it.”

Hiring, building better online systems and other improvements the IRS could spend money on take time, so it’s likely too late to fully fix this tax season with funding. There’s bipartisan support for some actions the IRS could take as a more immediate salve.

In a letter to Rettig and Treasury Secretary Janet L. Yellen on Wednesday led by Sens. Bob Menendez, D-N.J., and Bill Cassidy, R-La., 23 Democrats and two Republicans urged the IRS to consider steps including a pause on automated collections of unpaid taxes, dropping fines for taxpayers who paid at least 70 percent of what they owed for the 2020 and 2021 tax years, expedited processing for amended tax returns and others to smooth the process for taxpayers challenging a penalty.

The IRS responded Thursday, saying in a statement it’s looking at suggestions but is constrained by legal mandates and outdated technology.

Accountants and advocates participating in a Tuesday media briefing agreed the IRS needs more funding that makes taxpayer services a priority. But they urged immediate action to address predictions of chaos, frustration and even despair for taxpayers in the weeks ahead.

Melanie Lauridsen, senior manager of tax policy and advocacy for the American Institute of CPAs, said proposals recommended by their group and others, which are in line with lawmakers’ suggestions, are within the IRS’s abilities.

“If there is ever a time to provide relief to taxpayers, this is it,” she said.