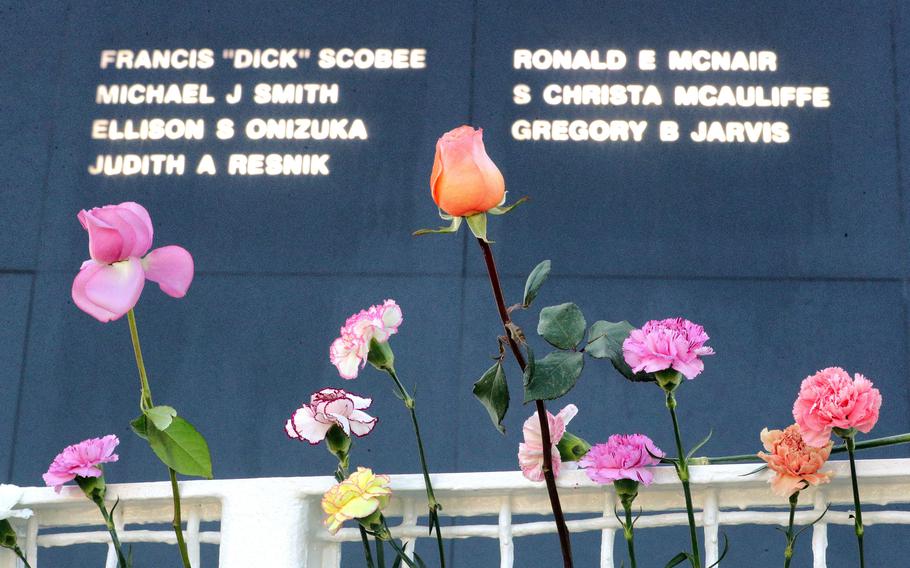 The sun illuminates the seven names of the astronauts killed in the 1986 Challenger shuttle disaster as flowers laid by guests at the base of the Space Mirror Memorial add color to the scene during a 35th anniversary commemoration ceremony at Kennedy Space Center, Fla., Thursday, January 28, 2021. (Joe Burbank, Orlando Sentinel/TNS)

(Tribune News Service) — NASA’s most tragic events happened 55 years ago, 36 years ago and 19 years ago with the deaths of 17 men and women in the Apollo 1 fire, Space Shuttle Challenger explosion on liftoff and Space Shuttle Columbia destruction on re-entry.

NASA will honor their memory as well as others who died in the pursuit of space exploration during the annual Day of Remembrance events in Washington, D.C., Kennedy Space Center, Houston and other NASA locations. The event is set for Thursday, Jan. 27, the anniversary of the Apollo 1 fire that killed Virgil I. “Gus” Grissom, Edward H. White and Roger B. Chaffee during a launch pad test at what was then Cape Kennedy Air Force Station.

“NASA’s Day of Remembrance is an opportunity to honor members of the NASA family who lost their lives in our shared endeavor to advance exploration and discovery for the good of all humanity,” said NASA Administrator Bill Nelson this week. “Every day, we have an opportunity to further uplift the legacies of those who gave their lives in pursuit of discovery by taking the next giant leap, meeting every challenge head-on, as they did.

“In doing so, we also must never forget the lessons learned from each tragedy, and embrace our core value of safety.”

The Apollo 1 accident happened in the early evening of Friday, Jan. 27, 1967. The three astronauts set to be the first manned mission of the Apollo lunar landing program were testing ahead of their planned February launch when fire broke out at 6:31 p.m. during a simulation on Launch Complex 34.

NASA’s next major blow came 19 years and one day later, just before noon on Tuesday Jan. 28, 1986, when Space Shuttle Challenger exploded 73 seconds after liftoff, killing all seven astronauts aboard.

The spacecraft disintegrated over the Atlantic Ocean, off the coast of Central Florida, after an O-ring seal failed. People all over the country viewed the disaster live because the shuttle was carrying Christa McAuliffe, who would have been the first teacher in space.

Nelson will participate in a wreath-laying ceremony at the Tomb of the Unknown Soldier at Arlington National Cemetery in Virginia at 10 a.m. Later, he will join NASA Deputy Administrator Pam Melroy and Associate Administrator Bob Cabana for a panel discussion on NASA safety and lessons learned from the tragedies that will air on NASA’s website at 3:30 p.m.

In attendance will be family members of the fallen astronauts including Sheryl Chaffee, the daughter of Roger Chaffee; Lowell Grissom, the brother of Gus Grissom; Kathie Scobee Fulgham, the daughter of Space Shuttle Challenger Commander Dick Scobee; and Evelyn Husband Thompson, the widow of Space Shuttle Columbia Commander Rick Husband. The ceremony will livestream at 10 a.m. on Kennedy Space Center’s Facebook channel.

Other ceremonies will be held at Johnson Space Center in Houston, Marshall Space Flight Center in Huntsville, Ala., and Glenn Research Center in Cleveland.