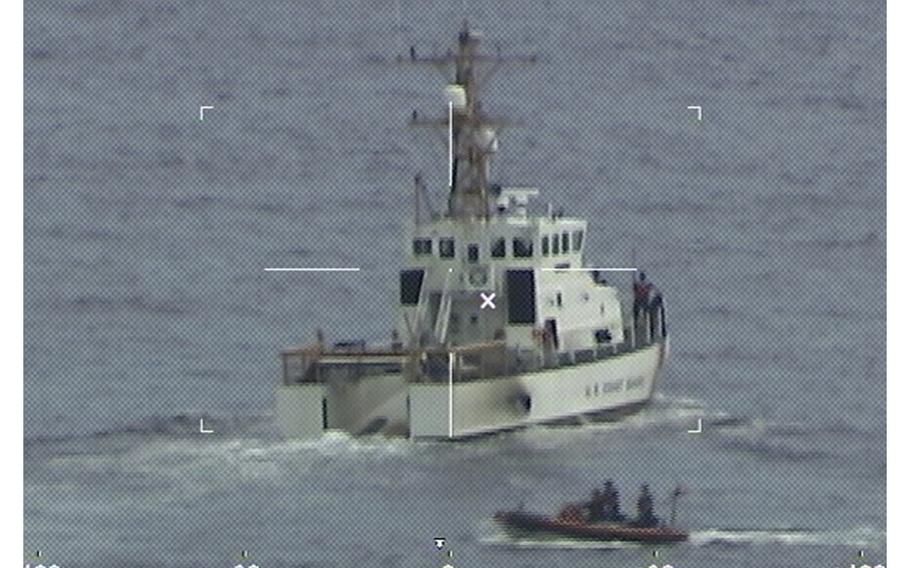 Coast Guard Cutter Ibis’ crew searching for people missing from a capsized boat off the coast of Florida, Tuesday, Jan. 25, 2022. The Coast Guard searched through the night Wednesday for 39 people missing from a capsized boat after a solitary survivor was found clinging to the overturned hull. Crews on at least four ships and five aircraft already scanned a vast area about the size of Rhode Island on Tuesday after the man was pulled to safety. (U.S. Coast Guard via AP)

The U.S. Coast Guard plans to suspend the search for dozens of migrants reported missing off the coast of Florida after finding four additional bodies, authorities said Thursday, concluding they are unlikely to find any more survivors.

Capt. Jo-Ann F. Burdian, who commands the U.S. Coast Guard’s Miami sector, said officials will stop “actively searching” at sunset for the remaining 34 people thought to be on the ship unless they receive any new information.

“It does mean that we don’t think it is likely anyone else has survived,” Burdian said.

The halt to the massive search - which involved combing an area the size of Massachusetts by air and sea - comes two days after a tugboat stumbled across a man clinging to an overturned boat 45 miles off Florida’s southeast coast. He told authorities 40 people departed from Bimini in the Bahamas on Saturday aboard the ship, and that it capsized amid rough weather shortly after casting off.

If all but one of the passengers believed to be aboard perished, it would be one of the worst migrant sea tragedies in the Caribbean in recent years.

“The decision to suspend is really a very complicated one,” Burdian said adding officers have saturated the area “over and over again” and exhausted “every possible resource” to determine if there were additional places they could explore for survivors.

“That unfortunate answer is no,” she said.

The U.S. Coast Guard, authorities and immigration advocates have been warning of a rising number of migrants from countries including Haiti and Cuba making perilous voyages by sea amid economic hardship, the coronavirus pandemic and political instability. Increasingly restrictive migration policies in the United States and across Latin America have also pushed people to look for alternative routes into the country, experts say.

Anthony Salisbury, special agent in charge of Homeland Security Investigations in Miami, said there is an ongoing criminal investigation to identify, arrest and prosecute anyone that organized or profited from the “doomed venture.” He asked anyone with additional information to contact the authorities.

“Help us bring criminals who prey on and victimize the vulnerable migrant community to justice,’ he said. “We don’t want anyone doing this again, this is dangerous stuff.”

In recent months, officers have come across makeshift vessels carrying upward of 200 people en route to the Bahamas, Puerto Rico and the United States. On Tuesday, the Coast Guard intercepted 191 Haitians aboard an overloaded vessel, about 40 miles southwest of Great Inagua, the southernmost island in the Bahamas.

The trek is perilous: The boats often sail through channels such as the Mona Passage, which lies between the Dominican Republic and Puerto Rico and is filled with tidal currents and sand banks, making it one of the most dangerous straits in the Caribbean. Migrants often travel in overloaded, poorly maintained and constructed vessels.

“The weather can change rapidly, and if you are traveling in a makeshift vessel, it is very easy to capsize and can result in people losing their lives,” Petty Officer Jose Hernandez said. “Especially if you are not wearing any proper safety equipment.”

Since 2014, at least 967 migrants have reportedly disappeared during the voyages in the Caribbean, according to the United Nations’ International Organization for Migration (IOM).

Since Oct. 1, the Coast Guard reported it has already rescued 802 Haitians and 586 Cubans attempting to migrate by sea. The numbers are significant compared with totals from the fiscal year in 2021, when they rescued 1,527 Haitians and 838 Cuban migrants.