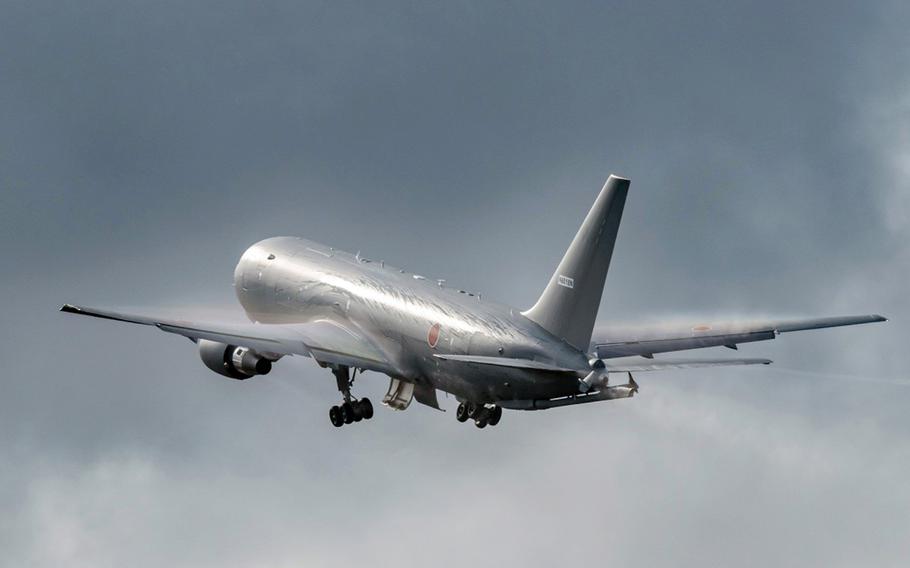 (Tribune News Service) — Boeing said Wednesday that the cost of the prolonged halt to deliveries of its 787 Dreamliner widebody jet has soared to $5.5 billion.

Executives delivering news of the deep fourth-quarter financial losses announced no end in sight for the unprecedented 787 delivery stoppage due to manufacturing quality issues.

There was also a separate $402 million write-off in the fourth quarter on the KC-46 Air Force tanker program.

The good news in the quarterly results was that 737 MAX production in Renton has ramped up to 26 jets per month and is on track early this year to reach Boeing's target of rolling out 31 MAXs per month.

The cash brought in for delivering those MAXs produced positive quarterly cash flow for the first time since the first quarter of 2019, stemming Boeing's bleeding of cash.

Boeing said part of the write-off for extra costs on the Air Force KC-46 tanker program stems from the growing cost of fixing the remote vision system that allows the operator of the refueling boom inside the tanker to see the approaching jet fighter that is lining up behind the tanker to be refueled in midair.

Supply-chain disruptions during the COVID-19 pandemic also contributed to the added tanker costs.

That brings the total of Boeing's tanker-program write-offs since 2014 to $5 billion, additional expenses that the company must cover itself under the terms of the fixed-price firm contract it won in 2011.

The 787 Dreamliner charges included a $3.5 billion write-off to cover what Boeing will have to pay as compensation to airlines for the delivery delays that it says extend further than previously anticipated.

In addition, Boeing is absorbing $2 billion in abnormal manufacturing costs resulting from the low production rate and the rework on previously completed airplanes.

Boeing said most of those costs will be incurred over the next two years, with $285 million recorded in the fourth quarter.

That's up from Boeing's estimate in the fall that fixing the 787 manufacturing flaws would add about $1 billion in abnormal manufacturing costs.

In a memo to employees released with the quarterly earnings results, Boeing CEO Dave Calhoun said he views the 787 financial hit as "a long-term investment."

"While we never want to disappoint our customers or miss expectations, the work we're putting in now will build stability and predictability going forward," Calhoun told the employees.

He expressed confidence in the future of the 787, saying it's a jet program with "significant runway ahead."

Dreamliner deliveries initially halted in fall 2020 when engineers discovered unacceptable gaps between fuselage sections. A few deliveries resumed in March 2021, only to stop again in May as the Federal Aviation Administration raised questions about Boeing's plan for inspecting the airplanes for the defects.

In October, an Italian 787 supplier was found to have installed faulty titanium parts. In November, the FAA cataloged a growing litany of 787 defects that needed investigation.

Rather than stipulate a time frame when it expects 787 deliveries to resume, Boeing said that it will take the time needed to get it right and wait for approval from the FAA.

Analysts have cautioned investors that 787 deliveries may not resume in the first half of this year. Last week, American Airlines and United Airlines during their quarterly earnings calls gave their expectations on taking delivery of 787s.

United's executive vice president, Gerry Laderman, said he doesn't expect to receive any until "after the summer." American's chief financial officer, Derek Kerr, was more optimistic when he specified "mid-April" for that airline's next delivery.

In a note to investors after the earnings details came out, Wall Street analyst Rob Stallard of Vertical Research took a negative view of the results.

"Just as we saw with the 737 MAX, Boeing is now racking up massive charges on the 787 with no firm end in sight, and its fate in the hands of the FAA," Stallard wrote.

Likewise, analyst Nick Cunningham of Agency Partners in the U.K. wrote that "the 787 issue keeps on expanding and extending in duration."

All the charges in the fourth quarter led to a net loss of $4.2 billion, or $7.02 per share, for the quarter. And for third straight year that brought Boeing an overall loss for 2021.

Revenue for the fourth quarter was $14.8 billion. That was up 3% from a year ago but 11% below Wall Street analyst expectations, cited by S&P Global Market Intelligence.

Cash flow from operations was $716 million in the fourth quarter. In the same quarter last year, Boeing saw a cash outflow of $4 billion.

Free cash flow, which is cash from operations minus expenditure on plant and equipment, was $494 million in the quarter compared to negative $507 million the previous quarter.

Investor focus on the positive cash flow may be why Boeing's share price rose more than $3 to $207.60 in early trading Wednesday after the earnings results came out. It fell later to $205 but was still up on the day.

After repaying one loan, Boeing's net debt fell from $42.4 billion the previous quarter to $41.9 billion at year end.

All the charges wrapped up in the last quarter's results suggested an attempt to put the cost of as much of the bad news as possible into last year, so that Boeing has a better chance of showing some profit in 2022, for the first time since 2018.

In a statement, Calhoun called 2021 "a rebuilding year."