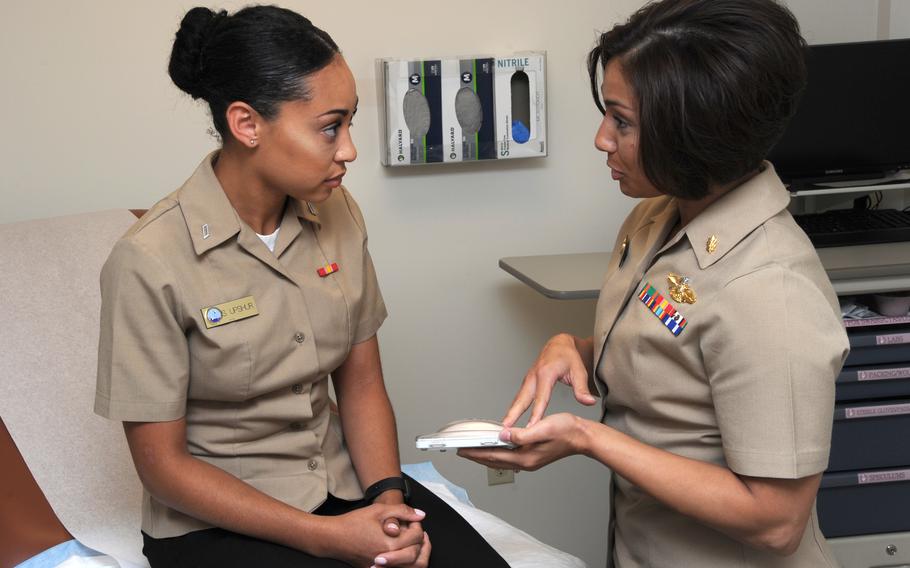 Navy Lt. Tasha Gallegos, right, talks to a patient about contraceptive care options May 18, 2018, at the Comprehensive Womens Health Center at Naval Hospital Pensacola, Fla. Lawmakers urged Defense Secretary Lloyd Austin on Thursday to eliminate copayments for birth control for service members and their families in order to “rectify the injustice” of troops paying for contraceptives that are free to most women through public and private insurers. (Jason Bortz/U.S. Navy)

WASHINGTON — Lawmakers urged Defense Secretary Lloyd Austin on Thursday to eliminate copayments for birth control for service members and their families in order to “rectify the injustice” of troops paying for contraceptives that are free to most women through public and private insurers.

In total, 141 Democrats signed onto a letter to Austin. They asked him to designate health care visits related to contraceptives as preventative services, which would waive the copayments through TRICARE, the military's health insurance provider.

Lawmakers have been attempting for the past few years to eliminate copays for birth control by passing a bill that would prohibit TRICARE from collecting them. The bill has failed to pass through Congress. The Democrats asked Austin to take action now as they work to build support for a more comprehensive change.

“Given the urgency of the matter, we encourage you to waive contraceptive copays that fall under your authority and continue working with Congress to eliminate all cost sharing for contraception for service members and military families, as gaps will still remain in statute,” the lawmakers wrote.

The Women’s Democratic Caucus drafted the letter. The lawmakers pointed out the discrepancy between the benefits offered to service members and their families versus other Americans. The Patient Protection and Affordable Care Act guarantees that employer-sponsored health care and public insurance cover all contraceptive methods without cost-sharing.

“These protections do not apply to coverage through TRICARE,” they wrote. “As a result, military families have fewer rights than those they serve to protect.”

Like with TRICARE, female veterans using the Department of Veterans Affairs for their health care also face copays for their birth control.

Multiple bills have been introduced in Congress to eliminate the copayments. The Equal Access to Contraception for Veterans Act, which would waive copays for VA patients, passed the House last year. The Senate has not acted on the bill.

The Access to Contraception for Servicemembers and Dependents Act of 2021, which would eliminate the copays under TRICARE, made it into the House’s version of the National Defense Authorization Act. The NDAA sets annual spending and policy priorities for the Defense Department. However, it was not included in the final bill that passed through Congress in December.

The change could affect millions of women. As of 2019, TRICARE covered about 1.6 million women of reproductive age, including military spouses and dependents. That year, there were about 1.7 million female veterans in the United States, though it’s not clear how many were of reproductive age and received their medical care from the VA.

“Ensuring our service members and their dependents receive basic health care services without cost barriers — just as civilians do — is the least we can do for these brave individuals who put their lives on the line in defense of our country and freedoms,” the lawmakers wrote.