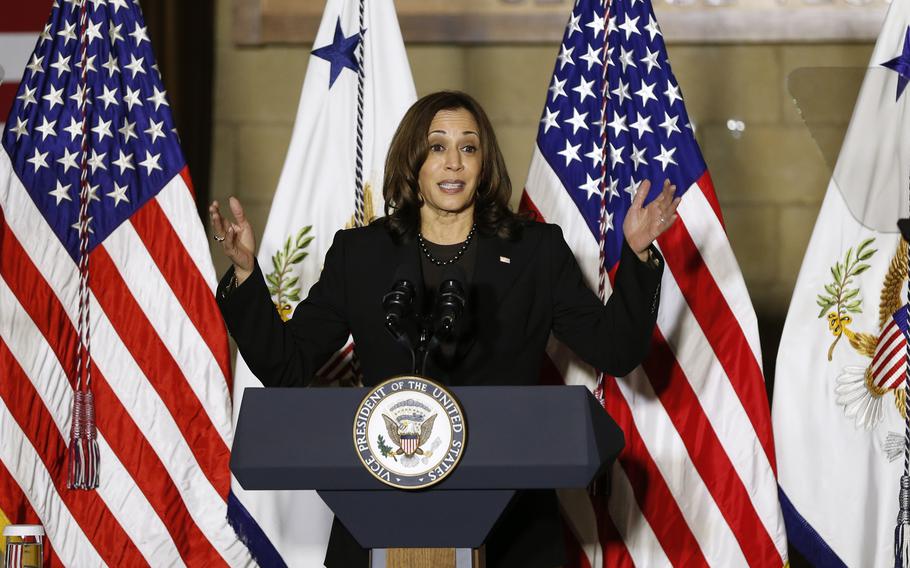 “We will interpret any violation of Ukraine’s sovereignty and territorial integrity by Russia and Vladimir Putin as an aggressive action and it will be met with costs, severe and certain,” Harris said on “Good Morning America.” (Jay LaPrete/AP)

WASHINGTON — Vice President Kamala Harris on Thursday insisted the United States would not accept a “minor incursion” of Ukraine by Russia, as the White House continued to clarify remarks President Joe Biden had made suggesting that it might.

“We will interpret any violation of Ukraine’s sovereignty and territorial integrity by Russia and Vladimir Putin as an aggressive action and it will be met with costs, severe and certain,” Harris said on “Good Morning America.”

In the second news conference of his presidency Wednesday, Biden said he expected Russian President Vladimir Putin to take some sort of action to “move in” and invade Ukraine and that the U.S. response “depends on what he does.”

“It’s one thing if it’s a minor incursion and then we end up having a fight about what to do and not do, et cetera,” Biden said. “But if they actually do what they’re capable of doing with the force they’ve massed on the border, it is going to be a disaster for Russia if they further degrade and invade Ukraine.”

Biden was swiftly criticized for appearing to give a green light to Russia to attack Ukraine as long as it didn’t amount to a full-scale invasion. Soon after, the White House issued a statement seeking to clarify Biden’s comments, saying that if Russian military moves across the border, it will be met with “a swift, severe, and united response from the United States and our allies.”

Biden’s remarks came days after a bipartisan delegation of senators traveled to Ukraine over the weekend to reassure leaders in Kyiv that the U.S. stood with them, amid a Russian troop buildup on the border with Ukraine. Those senators spoke with Biden Wednesday morning to brief him on their trip.

In a phone call with Biden in December — their second in a month — Putin warned that any new sanctions on Moscow could result in “a complete rupture of relations” between their countries. Putin has demanded that the United States and NATO agree to sweeping security guarantees that would bar Ukraine from joining NATO and rule out any eastward expansion by the U.S.-led military alliance.

Earlier this month, U.S. and Russian delegations met for talks in Europe but hit an impasse, as Russia continued to deny plans to invade Ukraine. White House officials have repeatedly emphasized that there will be “massive consequences” for Russia if it renews its aggression against Ukraine.

Before the president’s news conference Wednesday, Republican members of the Senate Foreign Relations and Armed Services committees held their own to urge Biden to take stronger action to prevent Russian aggression.

“Diplomacy has gone on for a long time,” Sen. James Risch, R-Idaho, said, noting that Putin has continued to demand assurances that Ukraine and other countries not be admitted to NATO. “To Putin, I would say: You have no control over this whatsoever. This is in the hands of the Ukrainian people. It’s in the hands of NATO as to who gets in and who does not.”

Harris, who made three television appearances Thursday morning, said on “Good Morning America” she is briefed every morning with Biden on threats to national security and other matters, and is often in the Situation Room with the president for discussions about Russia and Ukraine.

“What I can tell you is that the president has been very clear that if Russia takes aggressive action, it will be met with serious, severe and a unified response and consequences,” Harris said. “And that position that we have taken is grounded in a number of values that we hold dear, including the importance of respecting the sovereignty and territorial integrity in this case of Ukraine. We have not wavered from that perspective.”

The Washington Post’s Mariana Alfaro contributed to this report.