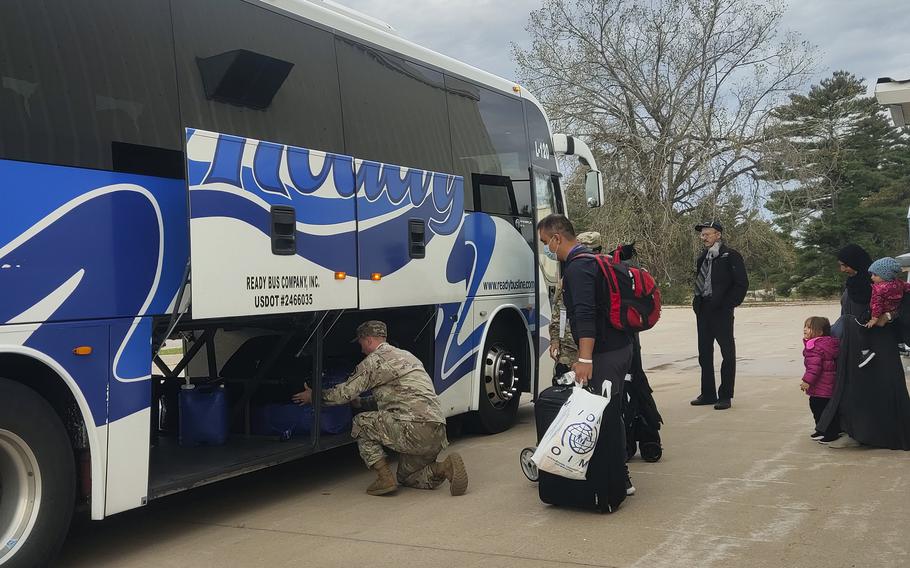 Soldiers help Afghan families load their luggage on a bus out of Fort McCoy, Wis., Oct. 11, 2021. They were among the first to leave the base and begin the journeys to their new hometowns. (Zubair Babakarkhail/Stars and Stripes)

The group's name — Welcoming New Neighbors-NW WI Refugee Resettlement — demonstrates what its members are all about. They want to offer a helping hand and some Wisconsin hospitality to three to five Afghan refugee families now housed at Fort McCoy.

Welcoming New Neighbors is pursuing multiple refugee families so the folks can support each other and benefit from having others around who understand their native language and culture.

"We've come to believe that we are one world and everybody is our neighbor, so we need to reach out and welcome our neighbors wherever they're from and whoever they might be," said Ginny Close, a leader of the interfaith effort.

Nearly 13,000 Afghan refugees were temporarily housed at Fort McCoy after their country fell to the Taliban following the U.S. withdrawal from Afghanistan in August after a 20-year military presence. The Military Times reported in December that the number of refugees at the base near Sparta had fallen to around 7,000 as evacuees have been resettled across the United States.

Six refugee assistance agencies are handling the resettlement efforts in Wisconsin, including Milwaukee-based Lutheran Social Services of Wisconsin and Upper Michigan — the agency from which the Eau Claire group is seeking approval. The agency must be granted an exception from the federal government to approve resettlement to a community more than 100 miles from its home office.

In the meantime, Welcoming New Neighbors is pressing ahead with optimism that its bid will be approved, Close said.

That means the group is seeking financial pledges to help support the families for their first few months in town as well as furniture and clothing donations. A high priority is to identify available housing options — a major challenge in a tight housing market with limited affordable options.

"Our plan is to line up five homes or apartments so we're ready to welcome the families," Close said, noting that a local real estate agent temporarily has pulled a three-bedroom house off the market in anticipation of offering it to an Afghan family.

Welcoming New Neighbors also is looking for volunteers to handle tasks ranging from meeting refugees upon arrival and delivering first meals to offering translation services and providing help with finances, transportation and employment.

"The goal is that they will be able to hit the ground running as soon as we can get them connected," Close said. "There is an urgency to get these people out of these military bases."

Shortly after the refugees began arriving at Fort McCoy in late summer, several area residents involved with immigration issues began discussing ways they could offer support, but the effort gained momentum in December when organizers learned that it might be possible to gain approval to resettle refugees in the Chippewa Valley.

The Eau Claire group already has attracted more than 50 people representing multiple faith-based organizations to its email list and has secured financial pledges to cover the first two months of rent and security deposits for a couple of refugee families, Close said.

Another member of the coordinating team, Bea Evans of Rice Lake, heard about the group through her work on the justice team for the Evangelical Lutheran Church of America's Northwest Synod of Wisconsin. She was immediately interested based on her past experience working to resettle refugee families from Bosnia and Afghanistan when she lived in Waukesha.

"It was a really rewarding experience and one that I grew so much from," said Evans, who has been impressed by the enthusiasm of Eau Claire area volunteers.

"People in Eau Claire really have a heart for this," she said. "I want to support and champion what they're doing and help get others involved."

Similarly, Eau Claire County Supervisor Don Mowry got involved with the latest resettlement effort after a mutually beneficial experience mentoring a Hmong refugee family that moved to Eau Claire in the late 1980s. The families became close friends and remain so today.

"This is just a new chapter for a new set of refugees, and think the whole community will benefit," Mowry said.

The refugees at Fort McCoy reportedly include mostly people who worked with the U.S. government in Afghanistan and others whose jobs put them at risk if they had stayed.

"They had to escape for fear for their lives," Close said. "They did all they could to support us in helping the United States in Afghanistan and we owe them a debt for doing that."