Today's news conference is a rare event for Biden 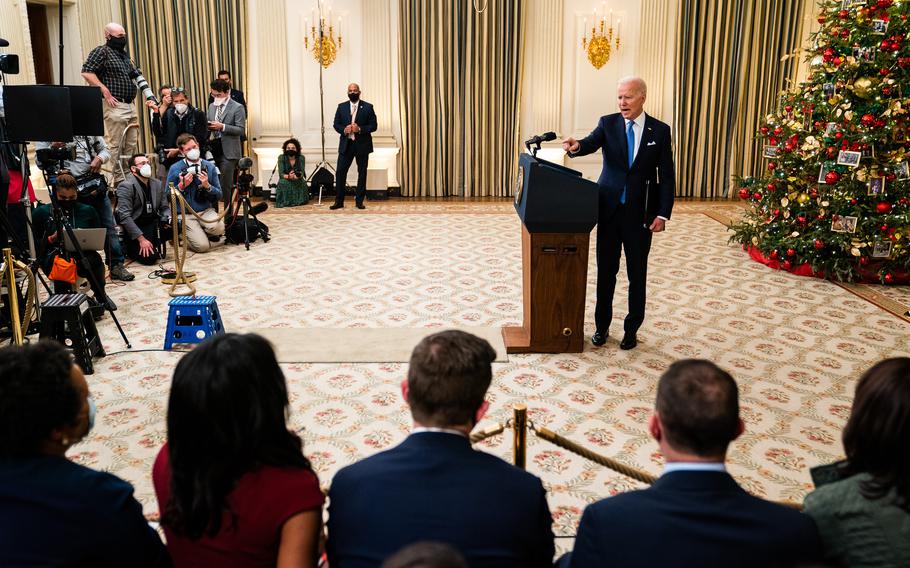 President Biden answers questions at the White House in December 2021, in a brief, informal exchange with reporters. (Demetrius Freeman/Washington Post )

WASHINGTON — When President Joe Biden steps up to a lectern in the East Room of the White House in front of a roomful of reporters Wednesday, he will be playing a presidential game of catch-up that many say he has no desire to win.

A year into his presidency, Biden's 4 p.m. news conference will be just his second on U.S. soil and his sixth overall, according to historians who track interactions between presidents and the press. When solo, joint and foreign news conferences are factored in, Biden has held fewer than Donald Trump, Barack Obama and George W. Bush during their first 365 days in office.

Such formal events have decreased as the stakes for Biden have increased, dating back to his days on the campaign trail, when meandering, even wonky speeches were snipped into more abbreviated affairs as Biden took the lead in the presidential primaries.

The scarcity of formal news conferences cuts down on the opportunities for a politician with a penchant for gaffes and misstatements to make mistakes - but it also elevates the importance of each one, including Wednesday's.

This news conference comes on the eve of Biden's first anniversary in office, and political analysts said that on such occasions keeping a low profile is not a workable strategy.

"There are times when you have to step up. This is one of them," said David Axelrod, a former top adviser to President Barack Obama. "You have to try to shape the narrative of the last year, because you know the media and opposition will."

Biden has also granted fewer one-on-one interviews - particularly with print publications - and given fewer prime-time addresses than most of his recent predecessors.

The White House has not said how long Wednesday's news conference will last. Biden is expected to get a range of questions on difficult topics: the coronavirus pandemic now stretching into its third year, a potential Russian incursion into Ukraine, rising inflation, a social spending plan that has stalled in Congress, a new push for voting rights that would require a filibuster revamp to pass.

Advisers say they see Biden as a man with a senator's penchant for soliloquy but a president's attraction of scrutiny. A stray sentence or flubbed phrase can ricochet around social media and cable news, dominating a news cycle and distracting from the administration's primary message that day.

Even Biden has joked about his propensity to say too much too often.

"As you've heard me say before, no one ever doubts I mean what I say," he said at a CNN town hall in July. "The problem is I sometimes say all that I mean."

White House officials, including press secretary Jen Psaki, note that Biden is routinely chatty with journalists, taking questions after speeches or during informal "gaggles" with members of the White House press corps.

But experts note - and reporters often complain - that such brief exchanges are very different from an hour-long, scheduled news conference where Biden cannot walk away if he objects to the questions. Biden's exchanges are less frequent, less freewheeling and generally shorter than when Trump held court with reporters.

When Biden has engaged in a back-and-forth with the journalists, it has not always gone smoothly.

In June, for example, during Biden's first international trip as president, he became irate at CNN's Kaitlan Collins when she asked why Biden was so confident that Russian President Vladimir Putin would change his behavior.

"Where the hell - what do you do all the time? When did I say I was confident?" Biden fired back. "What I said was - let's get it straight - I said, 'What will change their behavior is if the rest of the world reacts to them and it diminishes their standing in the world.'"

Later, before departing on Air Force One, Biden apologized to Collins.

"I shouldn't have been such a wise guy with the last answer I gave," Biden told a group of reporters.

In a June 24 exchange with reporters, shortly after announcing that an agreement had been reached on an infrastructure bill, Biden emphasized that he wanted to sign that bill along with a broader social spending measure. "If [the infrastructure bill] is the only thing that comes to me, I'm not signing it," Biden said.

That prompted confusion and frustration from his Republican negotiation partners, and two days later, he changed course. "My comments also created the impression that I was issuing a veto threat on the very plan I had just agreed to, which was certainly not my intent," Biden said.

In a back-and-forth with reporters in early July after remarks about the drawdown of forces in Afghanistan, Biden said that "I trust the capacity of the Afghan military," adding that it was "highly unlikely" the Taliban would take Kabul. The prediction was disproved a month later.

When he begins to get impatient with questions, Biden - adopting a tactic of other presidents - sometimes abruptly announces that he has to cut a session short because his aides or schedulers will be upset that he had exceeded his time for queries.

"Biden's not the first president who has used various excuses to get out of taking questions when he anticipates the questions won't be friendly," said Mark Knoller, a former CBS News correspondent who keeps statistics on presidents' public appearances.

He added that the White House seems to be holding as few formal news conferences as it can.

"It would appear to me that Biden and his senior aides have concluded that he just doesn't do well in that context," Knoller said.

The Washington Post's Ashley Parker contributed to this report.