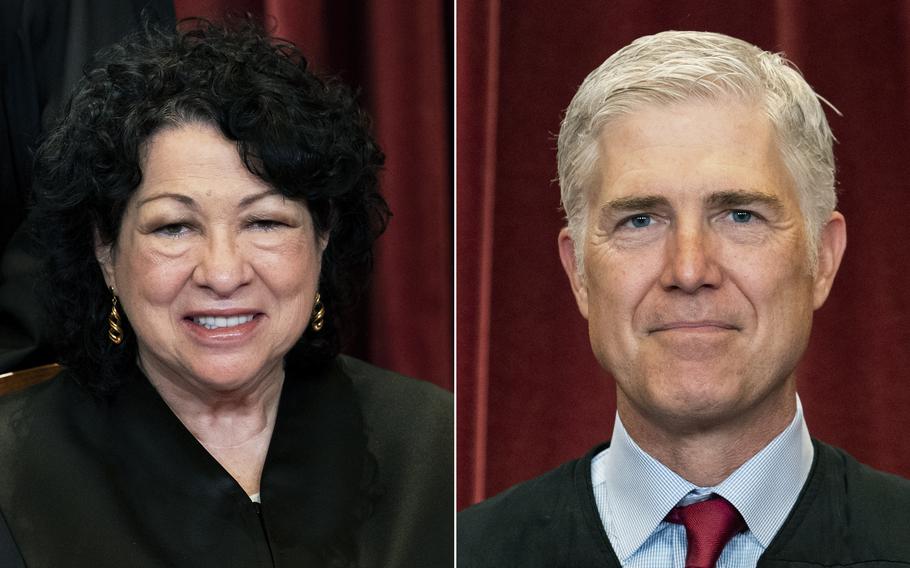 WASHINGTON — Justice Sonia Sotomayor said in a statement Wednesday that she did not ask Justice Neil Gorsuch to wear a mask on Supreme Court bench, and Chief Justice John Roberts followed up by saying he did not make such a request of their other colleagues either.

The rare statements from the justices seemed aimed at knocking down reporting that Sotomayor, who has health reasons to be especially worried about contracting covid-19, was participating remotely in oral arguments because Gorsuch was not wearing a mask.

The statements did not directly address that, but did refute some elements of an NPR report that raised the issue.

"Reporting that Justice Sotomayor asked Justice Gorsuch to wear a mask surprised us. It is false. While we may sometimes disagree about the law, we are warm colleagues and friends," said a joint statement from Sotomayor, one of the court's most liberal members, and Gorsuch, one of its most conservative.

But the report from longtime Supreme Court correspondent Nina Totenberg did not say Sotomayor had made the request. It said that the chief justice, "in some form or other asked the other justices to mask up." It said Gorsuch's "continued refusal since then has also meant that Sotomayor has not attended the justices' weekly conference in person, joining instead by telephone."

So several hours after the statement from Sotomayor and Gorsuch, Roberts issued his own through the court's public information office.

"I did not request Justice Gorsuch or any other Justice to wear a mask on the bench," it said. The release said Roberts would have no additional comment.

Sotomayor was diagnosed with diabetes as a child, and her condition makes her especially vulnerable to the dangers of covid-19. Since the court returned to the bench in the fall, she has been the most cautious of the justices, all of whom are vaccinated and have received boosters, according to a court spokeswoman.

In the court's previous rounds of oral arguments, she wore a mask on the bench, while the rest of the justices did not.

In the new year, since the emergence of the highly contagious omicron variant, Sotomayor has participated in oral arguments via speaker from her chambers. The rest of the justices at least enter the courtroom with masks on, with the exception of Gorsuch, who sits between Sotomayor and Justice Amy Coney Barrett.

Totenberg reported: "Sotomayor did not feel safe in close proximity to people who were unmasked. Chief Justice John Roberts, understanding that, in some form or other asked the other justices to mask up. They all did except Gorsuch, who, as it happens, sits next to Sotomayor on the bench. His continued refusal since then has also meant that Sotomayor has not attended the justices' weekly conference in person, joining instead by telephone."

On the bench Wednesday, all of the justices except Gorsuch again were masked, although a few took their face coverings off for brief periods. Sotomayor again participated remotely.