Family of Otto Warmbier, who died after detention in N. Korea, awarded $240K in seized assets 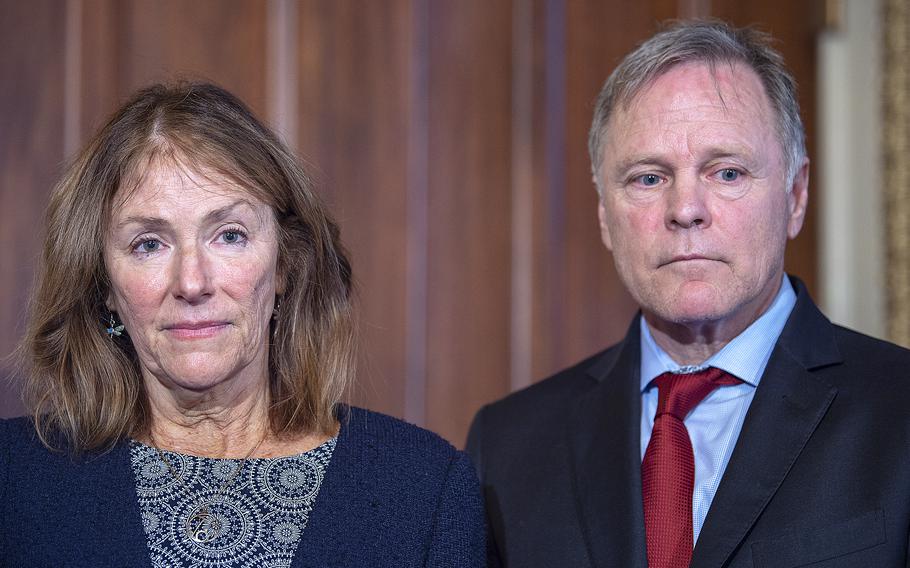 Fred and Cindy Warmbier attend an event on Dec. 18, 2019, at the U.S. Capitol in Washington, where members of the U.S. Senate addressed the death of the Warmbier’s son, Otto, while he was in North Korea. On Wednesday, Jan. 19, 2022, a N.Y. court ruled that the Warmbier family should be awarded more than $240,000 to be seized from North Korean assets. (Carlos Bongioanni/Stars and Stripes)

A court in New York has ruled that the family of deceased American student Otto Warmbier, who was detained in the secretive state, should be awarded more than $240,000 to be seized from North Korean assets.

Warmbier, a University of Virginia student, was 21 years old when he traveled with a tourism group to Pyongyang at the end of 2015 on his way to a study-abroad program in Hong Kong. He was arrested at Pyongyang's airport at the end of his trip and later convicted on charges stemming from pulling down a propaganda poster in a hotel in the early hours of Jan. 1, 2016 - considered a "hostile act against the state" by North Korea.

A month later, a tearful Warmbier appeared at an orchestrated news conference in North Korea and "confessed" to the "preplanned" crime of trying to steal a propaganda sign during the trip. He fell into a coma for unknown reasons in March 2016, on the same night he was sentenced to 15 years in prison with hard labor.

Following diplomatic wrangling by the Trump administration, he was evacuated to the United States in 2017 while still in a coma and died six days later at a Cincinnati hospital.

Warmbier's brain damage while in North Korea and subsequent death caused widespread shock in the United States at the time. His father, Fred Warmbier, accused North Korea of beating and torturing his son in detention, a claim Pyongyang denied. North Korea insisted that Otto Warmbier became sick after eating pork and spinach and that he had a severe allergic reaction to sedatives he was given.

His parents sued North Korea over their son's death. In 2018, Judge Beryl A. Howell of the U.S. District Court for the District of Columbia ruled that North Korea was liable for $501 million in damages, adding that the award was "appropriate to punish and deter North Korea" for the "torture, hostage taking and extrajudicial killing of Otto Warmbier." North Korea ignored the order.

Last week, the Northern District Court of New York approved a seizure of funds from the country's Korea Kwangson Banking Corporation (KKBC) on Jan 12., in an "unopposed motion" after both North Korea and the bank failed to respond to court orders and notices - including those filed at North Korea's mission to the United Nations in New York. The latest missed deadline was Jan. 10, the court documents showed.

"Neither North Korea nor KKBC has appeared in this action or filed any objections or responses to the petition for turnover within the applicable time periods," Judge Lawrence Kahn said in the order.

The court found that the bank was an "agent" of the North Korean state and directed New York's Office of the State Comptroller to turn over the funds in its possession to Otto Warmbier's estate "on a final basis."

In South Korea, former prisoners of war who escaped the North are seeking damages that would be paid with money held in an inter-Korean cooperation fund. The fund holds copyright fees that are collected on behalf of North Korean broadcasters, and plaintiffs are seeking payments for their damages out of those funds. On Monday, a South Korean court ruled that the judgment could not be enforced against the fund, and the case is now headed to an appeal.

In Japan, a group of ethnic Korean residents are suing North Korean leader Kim Jong Un, claiming violations of their human rights when they participated in a repatriation program to North Korea that ran from 1959 to 1984. The plaintiffs were among thousands of ethnic Koreans living in Japan who moved to North Korea, and they accuse the regime of "false advertising" about living conditions there. The plaintiffs are among those who subsequently managed to defect, fleeing to Japan or South Korea. A judgment in the case is expected this spring.

While it is an uphill battle to recoup damages from North Korea through legal systems outside the country, advocates say the lawsuits are an effective tool to raise awareness about the authoritarian nation's record on human rights.

"It generally makes life a little more difficult for Kim Jong Un and other leaders in North Korea. Some justice is probably better than none," said Ethan Hee-Seok Shin, a legal analyst with the Transitional Justice Working Group, a Seoul-based nongovernmental organization founded by human rights advocates.

"It's unlikely that we will be able to, in the near future, investigate or prosecute these human rights violation cases from North Korea," Shin said. "Having these civil lawsuits and being able to actually have these punitive damages or other financial penalties imposed on North Korea from a human rights angle, I think that's pretty important."

Donald Trump, who became the first sitting U.S. president to set foot in the isolated state in 2019, caused consternation when he said he believed Kim's claims that he did not know about the American student's treatment.

"I don't believe he would have allowed that to happen," Trump said in Hanoi after his second summit with Kim. "He tells me he didn't know about it, and I take him at his word." He added that he had spoken to Kim about the death of Warmbier and that Kim "feels badly about it."

The Washington Post's Min Joo Kim in Seoul contributed to this report.