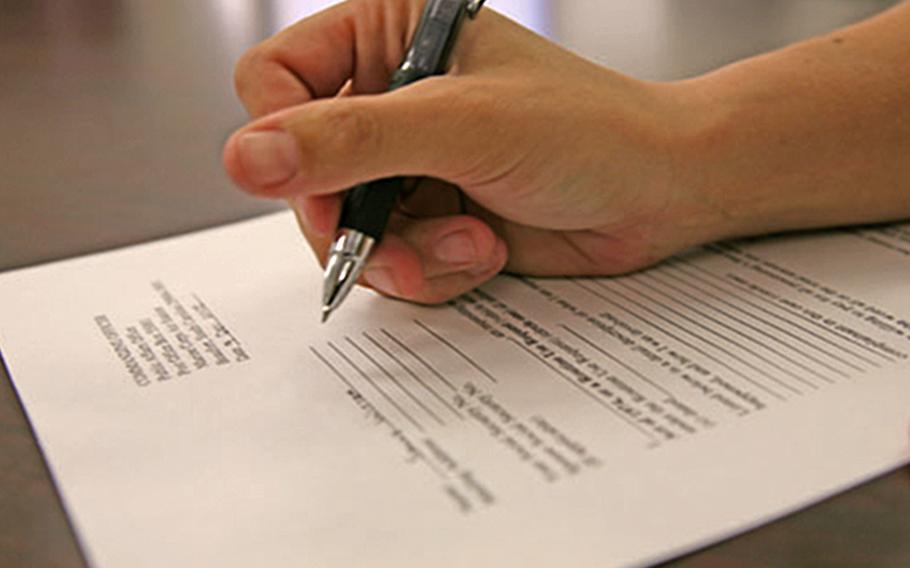 A Marine fills out a Freedom of Information Act request example at Marine Corps Air Station Beaufort. The Department of Defense along with the Navy, Marines and U.S. Central Command are being sued for violating the act, which allows people to obtain public records from the federal government. (U.S. Marine Corps)

A journalist is suing the Department of Defense, alleging that it broke the law in repeatedly denying his requests for public information based on his employment at a military publication.

Stars and Stripes reporter Chad Garland filed the lawsuit Thursday in the U.S. District Court for the District of Columbia. It contends that DOD, the Department of the Navy, the Marine Corps and U.S. Central Command committed numerous violations of the Freedom of Information Act from August 2020 through August 2021.

Stars and Stripes is not one of the parties involved in the lawsuit.

“This is a fight for my personal First Amendment and FOIA rights,” Garland said.

During the period covered by the suit, Garland made 15 requests as a private individual under FOIA, a federal law that allows people to obtain public records.

The agencies denied all of those requests as well as his subsequent appeals because he is a federal employee.

At issue is a DOD policy barring Stars and Stripes and its reporters from requesting public records through FOIA because the newspaper is administered under the department’s Defense Media Activity.

That makes it a federal agency, meaning neither Stars and Stripes nor its reporters can use FOIA, Defense Department policy states.

“Without the right of knowing what the government is doing, you can’t really talk about it or publish anything about it,” Garland said. “And that has real importance nowadays, with so much misinformation and disinformation. It is the responsibility of a good, ethical journalist to get that information so that they know what they are talking about.”

If the policy prevails, it could have a chilling effect on transparency, allowing the Pentagon or other agencies to restrict federal employees from using FOIA in a variety of cases, such as those involving whistleblowers, said Kel B. McClanahan, executive director of the Washington D.C.-based nonprofit law firm National Security Counselors.

Pentagon spokeswoman Susan Gough said the agency does not comment on ongoing litigation and referred questions to the Justice Department, which did not have a response Tuesday or Wednesday to the newspaper’s request for comment.

Enacted in 1967, FOIA is written to enforce government transparency and is open for use to any individual, corporation or partnership, but specifically excludes an “agency” from making a request.

Stars and Stripes, while editorially independent by acts of Congress, receives a subsidy from the DOD to defray the costs of providing a daily newspaper to troops overseas.

“Accordingly, any representative of (Stars and Stripes) cannot use the FOIA to gain access to DoD information,” Lyn M. Kirby, chief of the Defense Privacy, Civil Liberties and Transparency Division, wrote in a March 4 memo.

Kirby also wrote that Stars and Stripes reporters may make FOIA requests as news media representatives if they do so with the newspaper’s permission and not on its behalf.

“If you receive a request from a (Stars and Stripes) employee that does not demonstrate (the publication’s) approval, you should close it as ‘not a proper FOIA request,’” Kirby wrote in the memo.

Allan Blutstein, an Arlington, Va.-based attorney specializing in FOIA and information law, said the Defense Department’s position that Garland's requests fall under the purview of his work as a Stars and Stripes reporter “is reasonable and (the government) therefore is more likely to win this case.” That doesn’t mean it’s fair, he said.

"Of all (FOIA) requesters the public is better served if a Stars and Stripes reporter has access to these records than anyone else,” Blutstein said. “In that sense maybe, the public isn’t benefited but … that’s not a legal factor.”

Garland argues that the DOD does not have the authority to restrict private citizens’ ability to query the government. He also challenges the notion of a requirement of permission from Stars and Stripes that Kirby mentioned in the March 4 memo, which was written after several of his FOIA requests had been filed.

“The (Headquarters Marine Corps) FOIA office’s denial is improper because it turns on who I am,” Garland wrote in a Feb. 12, 2021, appeal to the judge advocate general regarding denial of his request for information about Silver Star and Purple Heart medals awarded since Dec. 31, 2014.

“As the 11th Circuit observed in Sikes v. Navy a few years ago, ‘the Supreme Court has made clear that “the identity of the requesting party has no bearing on the merits of his or her FOIA request.”’”

The DOD policy is odd in that it singles out Stars and Stripes reporters, McClanahan said.

Anyone else in the world, including reporters from other news agencies and even foreign governments, can request information through FOIA, he said.

“It seems to suggest the newspaper isn’t really a news-gathering agency,” McClanahan said. “This is a really remarkable idea that in order to avoid processing FOIA requests for the (estimated) 50 people who may file them, the official policy of DOD is to declare Stars and Stripes media is just a propaganda arm of the U.S. military. That’s insane.”