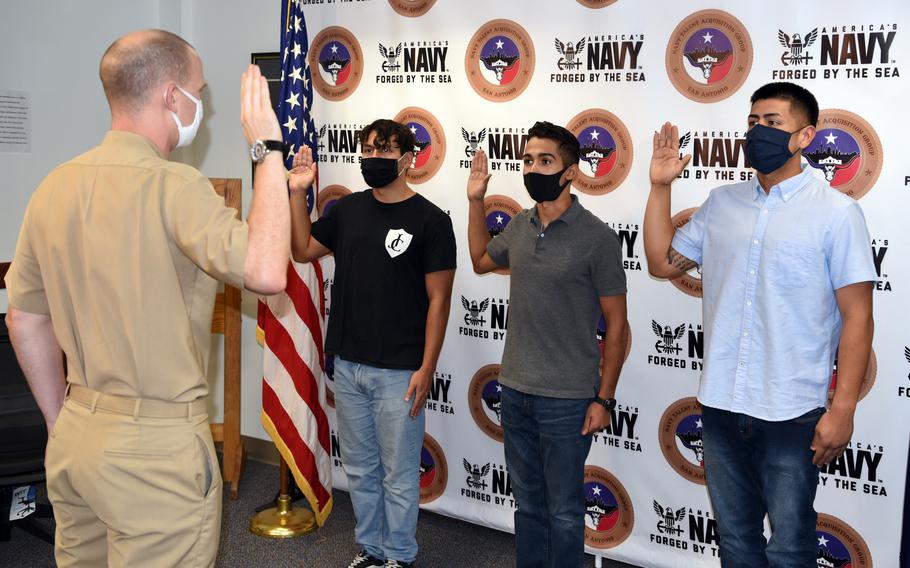 Jese David of San Antonio, Alexander Ortiz of Pflugerville, Texas, and Jacob Teran of San Antonio took the oath of enlistment into the Navy on Oct. 1, 2020, at Joint Base San Antonio. The Army, Navy, Air Force and Marine Corps shipped fewer recruits to boot camps in fiscal year 2020 than a year earlier, as the services shut down their recruiting facilities and moved their efforts to attract new troops entirely online for months, according to a study by the Rand Corp. published Tuesday.  (Burrell Parmer/U.S. Navy Photo)

The Pentagon took in fewer recruits in 2020 than in prior years as the coronavirus pandemic swept across the globe, but those accepted into the military were generally of higher quality than in recent years, a new think tank report found.

The Army, Navy, Air Force and Marine Corps shipped fewer recruits to boot camps in fiscal year 2020 than a year earlier, as the services shut down their recruiting facilities and moved their efforts to attract new troops entirely online for months, according to the study by the Rand Corp. published Tuesday. But the quality of new troops — based largely on aptitude test scores and education level — rose for the Army, Air Force and Marine Corps while remaining roughly the same for the Navy in 2020 compared to 2019, the study found.

The study’s findings largely match assertions made by top military officials in recent years, who have repeatedly touted increases in the quality of the troops that they are bringing into the military and their recruiters’ ability to adapt to new challenges brought on by the ongoing pandemic. Rand said it found the military services brought in about 16,000 fewer recruits in 2020 than the roughly 171,000 new troops who joined in 2019, but better-than-expected retention numbers among those with the option to leave the military allowed the services to meet their Congress-mandated force sizes at the end of 2020.

“Given the timing of the changes in accessions and contracts and the increase in the quality of contracts in most services, we believe that restrictions on in-person recruiting were more likely to be responsible for the decrease in contracts and accessions during [fiscal year] 2020 than a change in young people’s willingness to serve in the military,” the authors of the study wrote.

Top military officials have repeatedly acknowledged the challenges posed to recruiters as the pandemic has dragged on. Recruiters have turned to social media and video chatting to lure prospective recruits toward the military, after spending years engaging with young Americans at high schools, college campuses and big events. The military also has worked to find new ways to arm those recruiters in communities across the country.

Last week, for example, with coronavirus cases nationwide surging to all-time highs, the Army announced its largest-ever enlistment bonus available to new recruits — up to $50,0000 to highly qualified recruits who commit to a six-year enlistment. Army officials recognized they were competing more than ever with the private sector for talent, according to a news release announcing the new signing bonus.

“This is an opportunity to entice folks to consider the Army,” said Brig. Gen. John Cushing, a deputy commander for the Army’s Recruiting Command.

The Rand study found the military services likely lowered their recruiting goals during fiscal year 2020 because of the sudden uptick in experienced service members choosing to stay in the military or return to service. Military officials have attributed the increase in retention, at least in part, to the uncertain civilian jobs market as the pandemic has continued.

The recruiting and retention trends continued in fiscal year 2021, according to Pentagon statistics released last month.

Pentagon data shows the military services each met their recruiting goals in 2021, while they accepted almost 7,000 fewer troops into the services than in 2020.