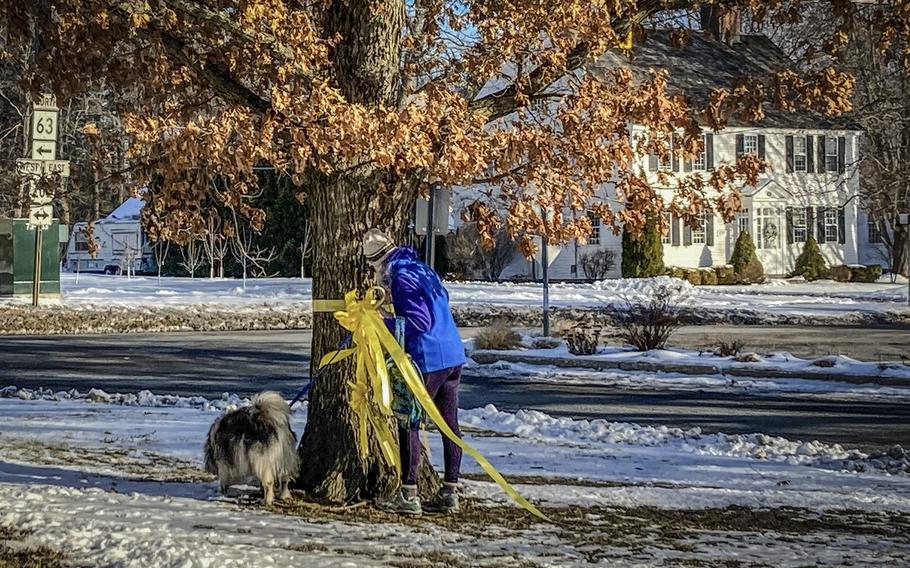 Gayle Carr, acting warden of the borough of Litchfield, Conn., removes a yellow ribbon honoring U.S. military service members from a tree on the Litchfield Town Green on Thursday, Jan. 13, 2022. Local officials’ decision to take down the ribbons, due to concerns other groups could put up their own displays, no matter how offensive, has angered some local residents. (Dave Collins/AP)

LITCHFIELD, Conn. — A symbol of support for U.S. troops has become the centerpiece of a contentious free-speech debate in this small town in the hills of northwestern Connecticut.

Yellow ribbons had adorned trees on the historic Litchfield Town Green since the start of the U.S. war in Iraq in 2003, placed there by families with relatives serving overseas in the military.

But the five remaining ribbons were taken down quietly Thursday by a local official enforcing an ordinance banning placards and other postings on the green, which dates to the early 1700s. The concern? Allowing the ribbons opens the door to any displays of free speech, no matter how hateful or offensive it might be.

Controversy over the ribbons has flared occasionally over the years and recently remerged in the Borough of Litchfield. In December, acting Warden Gayle Carr and the board of burgesses voted to renew enforcement of the ordinance. Seventeen people in the audience spoke in opposition to removing the ribbons at the December meeting, and none spoke in favor, according to borough records.

Val Caron, a retired electrician whose son is in the Air Force, had been tending the ribbons with his wife for more than a decade. He said he is considering legal action to put the ribbons back up.

"What they did is they slapped everybody in the military right in the face," Caron said. "There's a lot of people that are very upset. ... This is not over."

Carr removed the ribbons late Thursday morning, stuffing them into a backpack as she walked her dog on a nearly deserted town green.

"When it comes to a public space like that, if you allow some speech you have to allow all speech," Carr said in a phone interview. "But under the (borough) code we are allowed to say no speech, and that doesn't discriminate against anybody."

Carr added military families can still hold signs, march or hold vigils on the green — they just can't express themselves "in the form of attaching placards, and ribbons and signs to things."

The tradition of displaying yellow ribbons to honor military members across the country dates back generations. Free speech controversies have occasionally cropped up, usually involving bans on political postings on public land.

In 2004, for example, the National Park Service removed yellow ribbons welcoming soldiers home from Iraq from utility poles near the Herbert Hoover National Historic Site in Iowa, saying they were a political statement.

In 2009, a different set of Litchfield burgesses banned ribbons from the town green trees, citing the potential for a proliferation of free speech displays as well as possible tree damage. After a groundswell of opposition and national news coverage, the officials agreed in 2010 to allow five yellow ribbons — one honoring for each military branch — on the green.

People interviewed near the Litchfield Town Green on Thursday weighed in on the yellow ribbons debate.

"I would like to see less focus on the ribbons and more focus on helping veterans," said Jeff Russak, who owns Lawrence Jeffrey Estate Jewelers across the street from the green and who grew up in a family with many military members. "I'm all for putting up a yellow ribbon. You can put them up in your yard."

Longtime borough resident Bibby Veerman, 77, said she agreed with the decision to remove the ribbons. She said the ribbons were meant to be removed when service members returned home.

"Put them up somewhere else," she said. "I don't think it has to be a major issue."