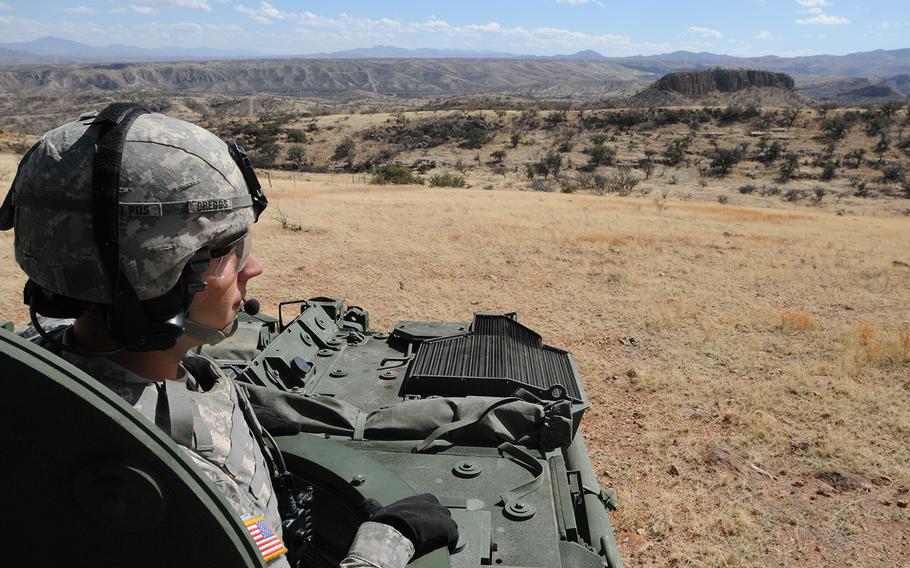 A soldier from the 1st Armored Division, Fort Bliss, Texas, conducts observations along the U.S.-Mexico border near Nogales, Ariz., on Feb. 27, 2019. U.S. Northern Command on Thursday, Jan. 13, 2022, launched an internal investigation into a wide range of alleged issues that have occurred among troops deployed on the federal mission along the border. (Keith Anderson/U.S. Army)

U.S. Northern Command announced its investigation is to examine a “wide range of alleged issues” that have occurred among troops deployed on a federal mission along the southwest border.

About 2,400 service members – a combination of active-duty and National Guard troops from 20 states – are now deployed along the border with Mexico, according to NORTHCOM officials. Their work includes monitoring security cameras and sensors to alert U.S. Customs and Border Protection agents of activity along the border. Troops also have administrative and support duties.

Military officials would not say Thursday what issues are being investigated, what triggered the NORTHCOM investigation, what exactly it would cover or how long it could last. Officials also did not confirm whether the investigation was related to a series of criminal incidents that involved troops serving along the border.

News reports have highlighted some incidents, including a drunken driving accident in Texas that resulted in the death of a service member, federal drug charges against a service member in Texas and an allegation of sexual assault involving troops in Arizona.

Later on Thursday, more than a dozen House Democrats called on the inspector general for the Texas Military Department to investigate news reports that those troops serving under Republican Gov. Greg Abbott have suffered pay issues, poor living conditions and lack of necessary equipment.

The state-sponsored deployment, known as Operation Lone Star, began in March 2021 and has swelled to include about 10,000 Texas National Guard members serving at the border and in support roles across the state. Those troops report to Abbott and support the Texas Department of Public Safety. They are not included in NORTHCOM investigation.

NORTHCOM has overseen thousands of troops deployed to the border since the federal mission began in April 2018 under President Donald Trump and has continued under President Joe Biden. The service members work alongside Border Patrol agents in a variety of support roles that allow those federal agents to conduct direct border security.

Trump initially declared an emergency at the border and sent troops in response to thousands of migrants traveling north through Mexico toward the United States. Biden ended the emergency order, but left troops in place.

A Government Accountability Office report released last year found the mission reduced the readiness of active-duty units assigned to the border because it led to missed or delayed training and caused a strain on troops rotating in and out of the mission.

The NORTHCOM investigation, known as a 15-6, will be led by a general officer and has the full support of Air Force Gen. Glen D. VanHerck, the commander North American Aerospace Defense Command and U.S. Northern Command, according to a statement from the command. The investigating officer will have an investigative team of senior members from the active military, Army Reserve and National Guard.

“The independent investigation team will take the time required to thoroughly answer the commander’s inquiry, identify concerns, and report findings, as directed. The full extent of the issues, if any, will be determined by the investigation team. Due to the ongoing investigation, we are unable to provide any additional details at this time,” according to the NORTHCOM statement.

The House lawmakers in their letter to Col. Daniel Heape, the Texas Military Department inspector general, asked him to “launch a full investigation” into the actions related to the mission and how the mission is impacting the “well-being, morale, and overall readiness of our troops so Texans can have a full accounting of what is happening to these service members.”

“These alarming reports call into question decisions made by the leadership of the TMD and Governor Abbott and necessitate an immediate impartial and comprehensive investigation of all [Texas Military Department] actions related to [Operation Lone Star] and the conditions of National Guard troops deployed at the U.S.-Mexico border,” the lawmakers wrote.