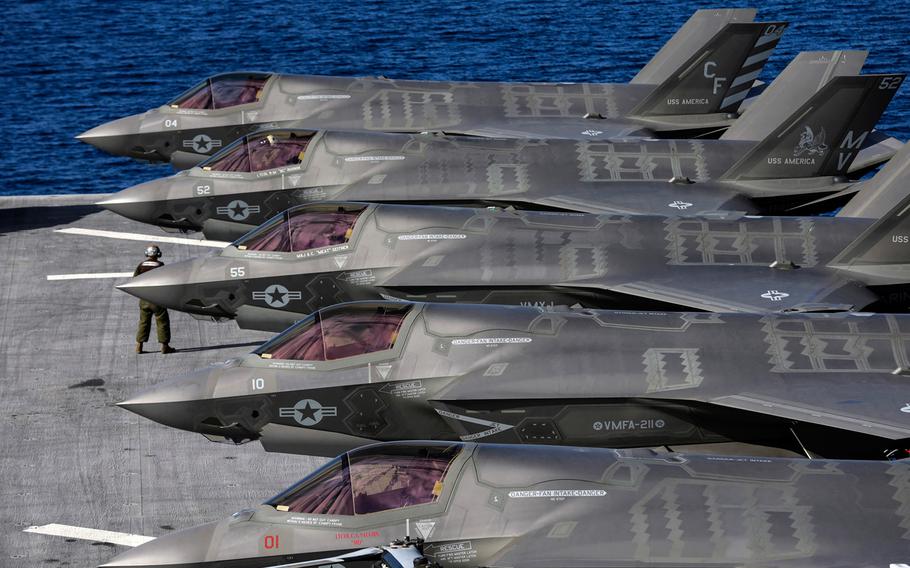 WASHINGTON — Witnesses and lawmakers agreed Wednesday during a House Defense Appropriations Subcommittee hearing that funding the Pentagon via continuing resolutions is detrimental to national security. But that accord hasn’t done anything so far to break a partisan impasse on a budget deal.

One after another, Pentagon comptroller Mike McCord and the military service chiefs detailed the negative effects that having spending locked in at last year’s levels has on their efforts to keep the military as potent as possible.

In basic terms, it represents an $8 billion reduction to the total the Defense Department believes it needs to meet its requirements, McCord said. But when other factors are included, such as inflation cutting into the Pentagon’s buying power, the actual impact is closer to three times that amount, he said.

But Congress must appropriate funds before government agencies get the money, and appropriators have not been able to make much progress on fiscal 2022 appropriations bills, including for the Defense Department.

Democrats want Republicans to offer topline figures for both defense and nondefense domestic spending so that negotiations can start in earnest. Republicans want policy provisions they find objectionable, sometimes called “poison pills,” stripped from the bills and legacy riders that have traditionally been included in funding legislation restored before they will talk numbers.

Ultimately, the disagreement is over the appropriate level of nondefense discretionary spending. Republicans feel it must come down so that defense spending can go up, while Democrats in Congress are OK with increasing defense spending, but not at the expense of domestic programs.

During Wednesday’s hearing, every member of the Defense subcommittee acknowledged the harmful effects that a full-year continuing resolution would have on the Pentagon. There is strong consensus among defense appropriators that the Defense Department should be fully funded through new legislation.

Still, members sparred over who was to blame for the current stalemate.

Connecticut Democrat Rosa DeLauro, who chairs the full Appropriations Committee, said Republicans had not made a single counteroffer to Democrats’ proposal.

“An ultimatum is not negotiating,” she said. “There has not been a single piece of paper outlining what it is that our colleagues on the other side of the aisle would like. There has to be a discussion.”

Kay Granger of Texas, the top Republican on the full committee, disputed this categorization.

“Republicans will not allow the majority to ram through irresponsible spending and harmful policies in other parts of the government by using the Department of Defense as a political weapon,” she said. “We gave you an offer. Just because you didn’t like the offer doesn’t mean we didn’t give an offer, and we did.”

DeLauro and Betty McCollum, D-Minn., who chairs the Defense subcommittee, both disagreed with Granger’s assertion that a counteroffer had been made.

“There has not been an offer of money on the table,” McCollum said.

Tom Cole, R-Okla., said the dispute was beyond the purview of the Defense subcommittee, and he suggested that party leadership and even President Joe Biden should be involved in resolving the issue.

“We need some focus here, not on some of these other agendas which frankly are stalling out right now.”

While the Defense Department has never had to work under a full-year CR, McCord said, it has become accustomed to dealing with shorter CRs at the start of each fiscal year.

From 1991 to 2010, defense appropriations bills were enacted an average of 29 days into the new fiscal year, he said. Since the Budget Control Act was enacted in 2011 in an effort to curtail spending that average has ballooned to 118 days.

The Pentagon has adapted, and officials know not to plan to start new programs (which is not allowed under a CR) during the first part of the fiscal year, he said.

If Congress doesn’t enact a new defense funding bill, some money will be frozen in accounts that make it unusable, McCord said. For example, in 2021, Congress appropriated $3 billion in support for the Afghan Security Forces Fund, but the Pentagon can’t spend money for that purpose in 2022 because the Afghan security forces no longer exist.

The service leaders worried that modernization of the nuclear triad — methods to launch a nuclear strike via land, sea and air — would be delayed by a year or more. This applies to the development of the LRSO (short for Long Range Stand Off weapon, an air-launched cruise missile), the GBSD (or Ground Based Strategic Deterrent, the replacement for aging Minuteman III missiles) and the B-21, a new stealth bomber, said Gen. C.Q. Brown, the Air Force’s chief of staff. The Next Generation Air Dominance program, which will produce a sixth-generation fighter to replace the fifth-generation F-35, could be delayed by two years, he said.

A continuing resolution would also disrupt the production schedule for Columbia-class submarines, the next generation of nuclear-armed submarines, said Adm. Michael Gilday, the chief of naval operations.

“That program has no margin as it replaces submarines that have been in the water for four decades,” he said.

All of the military leaders noted that China and Russia, the most capable potential adversaries, are not having to slow their efforts due to self-imposed obstacles.

“This train wreck in front of us is entirely preventable,” said Gen. David Berger, commandant of the Marine Corps.