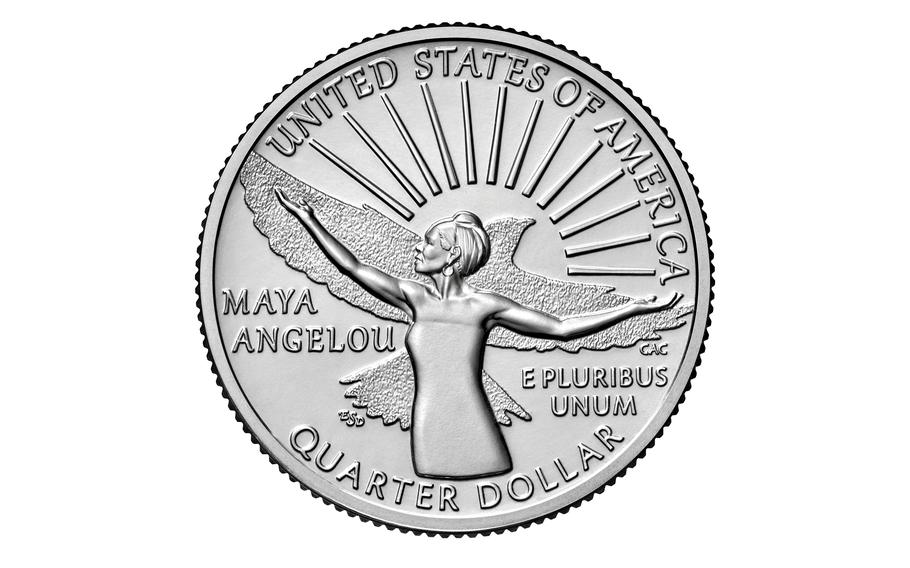 The U.S. Mint has begun shipping quarters featuring writer and civil rights activist Maya Angelou to banks in the United States, the bureau said Monday - making her the first Black woman to be featured on a quarter-dollar.

It's the first in a series of coins designed to celebrate the accomplishments of American women.

Other women whose likenesses will soon be featured as part of the American Women Quarters Program include Anna May Wong, widely considered to be the first Chinese American movie star, and Sally Ride, the first American woman to fly to space.

"Each time we redesign our currency, we have the chance to say something about our country - what we value, and how we've progressed as a society," U.S. Treasury Secretary Janet Yellen said in a statement. "I'm very proud that these coins celebrate the contributions of some of America's most remarkable women, including Maya Angelou."

Angelou died in 2014, a few years after receiving the Presidential Medal of Freedom, the nation's highest civilian honor, from President Barack Obama. The Washington Post's Emma Brown described her as "a child of the Jim Crow South who rose to international prominence as a writer known for her frank chronicles of personal history and a performer instantly identified by her regal presence and rich, honeyed voice."

Her 1969 memoir "I Know Why the Caged Bird Sings" detailed, as Brown wrote, "the racism and abuse she endured during her harrowing childhood."

The new 25-cent coin will feature Angelou from the hips up, with her arms uplifted, a bird in flight and a rising sun behind her - "images inspired by her poetry and symbolic of the way she lived," according to the U.S. Mint. To the right are the words "e pluribus unum," Latin for "out of many, one," a phrase also on the national seal. The coin's designer was Emily Damstra, and its sculptor, Craig Campbell. It was issued in 2022 and minted in Philadelphia, Denver and San Francisco.

The flip side of the coin features a portrait of founding father George Washington designed by Laura Gardin Fraser. According to the U.S. Mint, Fraser became the first woman to design a U.S. commemorative coin when she created a portrait of Washington to mark his 200th birthday.

"Though her work was a recommended design for the 1932 quarter, then-Treasury Secretary Mellon ultimately selected the familiar John Flanagan design," the Mint statement reads.

Mint Deputy Director Ventris Gibson said of Fraser's portrait of Washington, "Ninety years after she intended for it to do so, her obverse design will fittingly take its place on the quarter."

Angelou is the first of five women whose likeness are set to be featured on new 25-cent coins in 2022 as part of the American Women Quarters Program. The program was authorized by an act of Congress in 2020, which directs the Secretary of the Treasury to issue up to five quarters per year until the end of 2025 representing "the accomplishments and contributions" of a range of American women in various fields related to politics, science and the arts.

"Each 2022 quarter is designed to reflect the breadth and depth of accomplishments being celebrated throughout this historic coin program," Gibson said in the statement. "Maya Angelou, featured on the reverse of this first coin in the series, used words to inspire and uplift."

Some lawmakers cheered the news of the rollout of the Maya Angelou quarter Monday, including Rep. Barbara Lee, D-Calif., the sponsor of the resolution that paved the way for the creation of the American Women Quarters Program.

Others, such as Democrats Colorado state Rep. Leslie Herod and Pennsylvania state Rep. Malcolm Kenyatta, joked on social media about their preference for the Angelou quarters over existing quarters.

As they celebrated the first Black woman to be featured on a quarter, others referenced a separate effort to add abolitionist Harriet Tubman to the 20-dollar note - an effort first launched when Obama was president that was opposed by President Donald Trump but that the Biden administration has attempted to revive.

The U.S. Mint recommends that those interested in the coin's release date ask their local bank if they have any available in late January and early February.

A proof set of the coins in the series is available to preorder online.