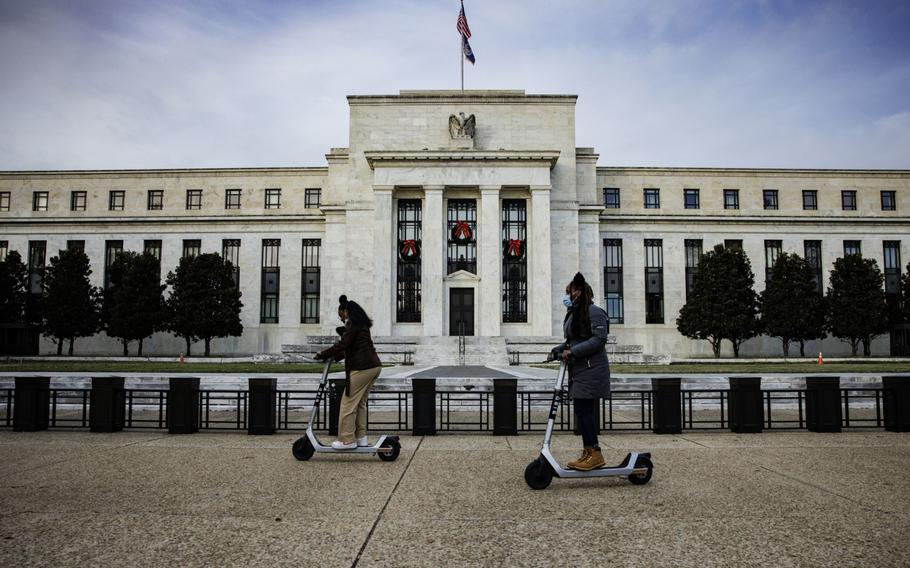 The drumbeat for the Federal Reserve to implement four quarter-point interest-rate hikes this year is growing -- and with the speed that markets have been moving, there's a possibility that traders may soon look to protect themselves against the risk of even faster tightening.

Swaps are already indicating the central bank's target will be 88 basis points higher by the end of this year -- seen by many as a sign the market is baking in three hikes, plus the possibility of a fourth in 2022 -- and momentum is building for the first increase to take place as soon as March. With U.S. inflation data ahead this week, as well as testimony from top Fed officials, it could be just the beginning of a bigger repricing.

"It's quite possible that the Fed is forced to be more aggressive in this cycle," said Lou Crandall, chief economist at Wrightson ICAP. "You could see wage inflation numbers that require a more aggressive policy response."

It's a shift that's happened with remarkable speed. Heading into the final stretch of 2021, the prospect of a March hike was close to a coin flip, but such an outcome is now almost fully priced in. The 10-year Treasury yields was then around 1.50%, a quarter point below current levels.

While three-to-four hikes for 2022 is priced in on average, some in the market are betting on less tightening and others more. As the average tightening predicted by market prices climbs closer to a full percentage point, that suggests some traders could be hedging against the risk of five or even six increases.

To be sure, the bulk of derivative-market activity suggests investors are currently making wagers either side of the central scenario, but it's a risk that has potential to grow, especially if inflation accelerates.

A rate-hike premium is being added at the margin out to 2024. Option traders are flagging the prospect of eight quarter-point rate moves by early 2024, up from earlier expectations of around six. Should Fed officials this week decline to walk back the recent message about tackling inflation pressures, that tightening momentum in options could extend. A hotter-than-expected inflation number also has potential to add fuel to the move.

U.S. consumer-price inflation probably accelerated to 7.1% last month, the fastest pace in almost four decades, according to a Bloomberg survey of economists before the numbers are released on Wednesday.

"The idea that the Fed sticks to a template of four rate hikes this year is challenged by what has already happened, with the pace of tapering accelerating in the past three months," said Guneet Dhingra, head of U.S. interest-rate strategy at Morgan Stanley. "If they need to hike fast, they will. There is a high degree of variability that could result in more than four hikes -- or less -- dependent on whether inflation is slower during the second half of the year. The Fed is showing urgency and being flexible."

So if the Fed does fire the starter's pistol in March -- and the inflation situation warrants -- the four rate increases that the likes of Goldman Sachs and JPMorgan Chase are now forecasting could be just the beginning. The bond market is alert to the idea that every Fed meeting this year from March onward -- a total of seven -- is potentially live in terms of delivering a rate hike or providing details about the pace of balance-sheet changes.

Bloomberg Economics economist David Wilcox thinks that the latest forecasts for the unemployment rate and core inflation are consistent with six hikes this year and another three in 2023. That would have the funds rate reaching its neutral level in 2024, faster than the FOMC's expectations, he wrote in a report.

One important consideration for traders assessing the probability of more than four rate hikes for 2022 is whether the Fed's focus on shrinking its near $9 trillion balance sheet this year will mitigate the need for raising its key overnight borrowing rate at a much faster pace.

A quicker rate of policy tightening will risk damping the recovery in the U.S. economy and may drag down longer-dated Treasury bond yields, according to SMBC Nikko Securities Inc. The spread between two- and 10-year U.S. yields has almost halved from a peak in March 2021.

Some think the Fed has little choice but to become more hawkish. Former New York Fed President Bill Dudley said as wage growth likely spurs consumer inflation, "the Fed will have to respond by taking interest rates above neutral well before the end of 2024."

That said, it's only the second week of 2022, there's a long way to go until even the March meeting, and the rate being targeted by the Fed officially is still very much tethered close to zero -- for now.

Bets on Bank of England policy tightening remain ahead of the Fed with 100 basis points of rate hikes expected this year. Meanwhile the European Central Bank is seen adjusting policy at a much slower pace, with markets pricing 14 basis points by December. Policymakers in Frankfurt last raised borrowing costs over a decade ago.

Bloomberg's Masaki Kondo and Nicholas Reynolds contributed to this report.