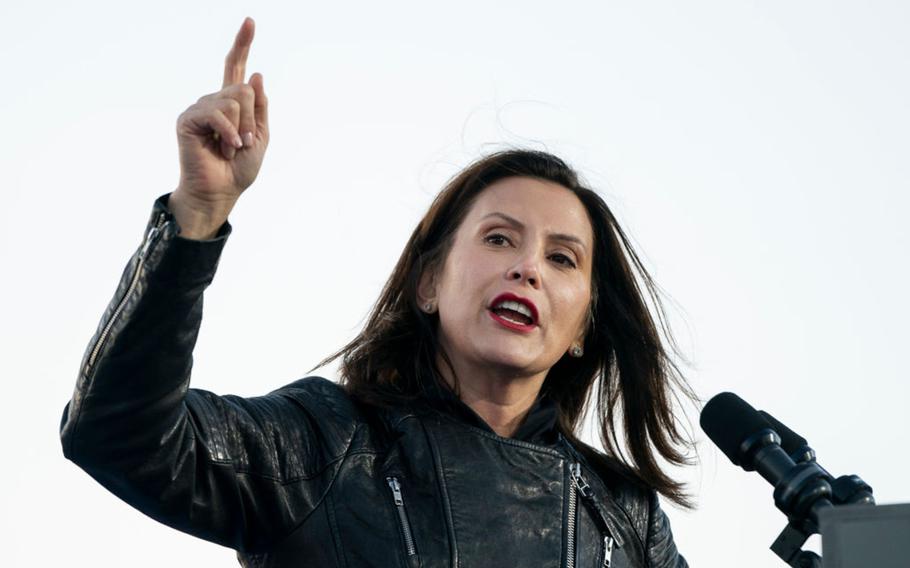 A defense lawyer for one of the accused ringleaders, Potterville resident Adam Fox, 38, argued conversations captured by the spy gadget will prove there was no conspiracy to kidnap Whitmer and that the government entrapped five men awaiting trial in a case that has focused attention on violent extremism in Michigan. Defense lawyers are fighting to play the recordings for jurors during a trial starting in March in federal court in Grand Rapids.

"Adam Fox asserts that portions of these same recordings and messages show that there was no agreement between the defendants to commit a crime and that the government through its informants and agents entrapped the defendants into the limited participation the government did induce," Fox lawyer Christopher Gibbons wrote Monday.

Court records show the key fobs were part of a broader package of spy tools a dozen informants and undercover FBI agents used during an investigation that ended in arrests in October 2020. Prosecutors have more than 1,000 hours of conversations, secretly recorded video and reams of text messages.

Fox's lawyer was responding less than a week after the FBI and prosecutors tried to distance themselves from a rogue informant, Stephen Robeson, 58, of Oxford, Wisconsin. Prosecutors said Robeson was a double agent who offered to use a drone to commit domestic terrorism and use charity money to finance attacks before being dropped by the government and indicted on a gun charge.

But the FBI knew he was breaking laws while working as an informant and paid the convicted felon $19,328.79 as informants and federal agents entrapped the five Whitmer defendants, according to Fox's lawyer.

Prosecutors have argued in court filings that FBI agents did not entrap anyone and that the defendants were predisposed to commit the crime and attack other politicians, including Ohio Gov. Mike DeWine.

The filing Monday provided new details about Robeson's involvement and active role in helping the FBI build a case. In the filing, Robeson is referred to as CHS Steve, an acronym for "confidential human source"

Robeson was working for the FBI as an informant for one year, starting in October 2019.

He organized and paid for an anti-government meeting in Dublin, Ohio, in June 2020 that served as a catalyst for the kidnapping plot, according to the lawyer and court records.

There were several FBI informants at the meeting and they were wearing recording devices, Fox's lawyer wrote.

"The FBI provided CHS Steve with his recording device, taught him how to use it, and how to properly record an event with timestamping and the like for forensic purposes," Fox's lawyer wrote.

Robeson also hosted a field training exercise in Wisconsin in July 2020 that was attended by a second FBI informant known as "Dan."

Later that month, Robeson hosted another meeting in Peebles, Ohio, a tiny village about an hour's drive east of Cincinnati.

Robeson also attended a training exercise in northern Michigan in September 2020 at a remote camp owned by convicted kidnap plotter Ty Garbin of Hartland Township, according to the indictment and lawyer.

Garbin is serving a six-year sentence in a federal prison and is expected to be the government's star witness at trial.

While at the camp in Luther, Robeson and "Dan" assembled several defendants into a car to conduct nighttime surveillance of Whitmer's vacation home, according to Fox's lawyer.

"...the government attempts to minimize the extensive contact and control it exercised over the actions and person of CHS Steve throughout the investigation," Fox's lawyer wrote.

"In contrast, the FBI recruited, supervised, and paid CHS Steve to organize, attend, and clandestinely record the meetings and events that are the backbone of the superseding indictment levied against Adam Fox in this case," Gibbons added. "The argument that CHS Steve was not acting as an agent of the government should be firmly rejected."

The government knew Robeson was offering to use charity money to buy weapons for future attacks, Fox's lawyer wrote.

Using the charity was discussed during a recorded phone conversation between Fox and informant "Dan," the lawyer wrote. Two FBI agents supervised the call.

Prosecutors indicted Robeson in March with illegally obtaining a sniper rifle, an act that amounted to the first sign of trouble for the government team in the kidnapping case. In the ensuing months, one of the lead FBI agents was arrested and accused of beating his wife after a swinger's party, dropped from the Whitmer case and fired.

Robeson, who is not allowed to possess firearms as a convicted felon, is not expected to spend a day in prison despite pleading guilty to a 10-year gun crime in October under terms of a plea agreement filed in court. The agreement calls for Robeson to serve two years' probation for illegally possessing a high-powered sniper rifle, but U.S. District Judge William Conley will choose the sentence Feb. 3 in federal court in Madison, Wisconsin.