Fauci fires back at Sen. Paul, accusing him of using attacks for 'political gain' 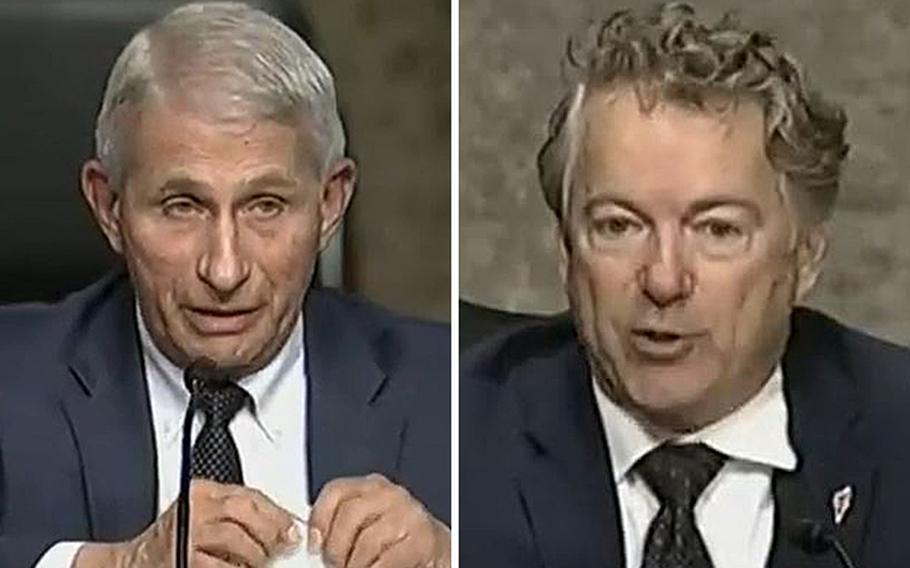 Anthony Fauci accused Sen. Rand Paul, R-Ky., in a Senate hearing on Tuesday of raising campaign funds off false attacks on him that have encouraged threats on Fauci's life.

Paul and other conservatives, who have questioned the science behind vaccines, masks and other public health measures, and spun conspiracy theories about Fauci's role in the creation of the coronavirus, have trained increasingly hostile attacks on the doctor, who is President Joe Biden's chief medical adviser on coronavirus.

Those attacks on Fauci, director of the National Institute of Allergy and Infectious Diseases, have escalated as the pandemic has dragged on, and Fauci has been under stepped-up security since 2020.

On Tuesday, Fauci demanded to speak uninterrupted after Paul accused him in a Senate health committee hearing of helping to orchestrate a smear campaign against three conservative academics who opposed lockdown measures in 2020. But the emails Paul pointed to showed Fauci merely sending colleagues a link to a Wired article debunking claims about reaching "herd immunity."

Fauci called Paul's repeated attacks a distortion of reality, and blamed such falsehoods for spurring threats on his life. He cited the arrest of a California man in Iowa last month who police said was traveling to Washington with an AR-15 rifle and multiple magazines of ammunition. The man had a "hit list" including Fauci and several others, mostly Democratic politicians and officials.

"What happens when he [Paul] gets out and accuses me of things that are completely untrue?" Fauci said of Paul. "All of a sudden that kindles the crazies out there, and I have life - threats upon my life, harassment of my family and my children with obscene phone calls because people are lying about me.

Fauci went on to say that those have gone beyond mere harassment. "As some of you may know, just about three or four weeks ago on December 21st, a person was arrested who was on their way from Sacramento to Washington, D.C., at a speed stop in Iowa," Fauci said. "And they asked, the police asked him where he was going, and he was going to Washington, D.C., to kill Dr. Fauci."

A federal complaint says that Kuachua Brillion Xiong, 25, was arrested in Iowa with an AR-15 and multiple magazines of ammunition in his car. When questioned, Xiong said he intended to kill Fauci, former residents Bill Clinton and Barack Obama, Meta founder Mark Zuckerberg and potentially Biden. The complaint against Xiong does not mention Paul. An attorney for Xiong has indicated in court that he plans to use an insanity defense.

Meanwhile, on Paul's website, the anti-Fauci falsehoods have been put to work as a fundraising strategy, Fauci said at the Senate hearing Tuesday.

He noted that the senator's website says "Fire Dr. Fauci" and includes "a little box that says contribute here."

Paul rejected the criticism, saying it was "disappointing for you to suggest that people who dare to question you are responsible somehow for violent threats."

Paul and others have claimed Fauci is part of a conspiracy that led to the creation of the coronavirus in a Chinese lab. In recent months, Fauci's office has been swamped by viral claims of misinformation and he and family members have faced harassment and security concerns. A Fox News host recently compared Fauci to a Nazi doctor known as the "angel of death." Right-wing personalities routinely call for Fauci's ouster while hashtags such as #FireFauci and #FauciKillsPuppies trend on social media.

Sen. Mitt Romney, R-Utah, spoke out in support of Fauci and the other scientists from the Biden administration testifying on Tuesday, without criticizing Paul by name, in an otherwise heavily partisan hearing.

"But I do want to point out how much I personally, and I believe the great majority of the people in our country, respect you individually and professionally for the work that you do. You are scientists, not politicians. Nevertheless, you are being made subject to the political whims of various political individuals. And that comes at a high cost, which unfortunately, I fear will lead some to not want to participate in helping our government."