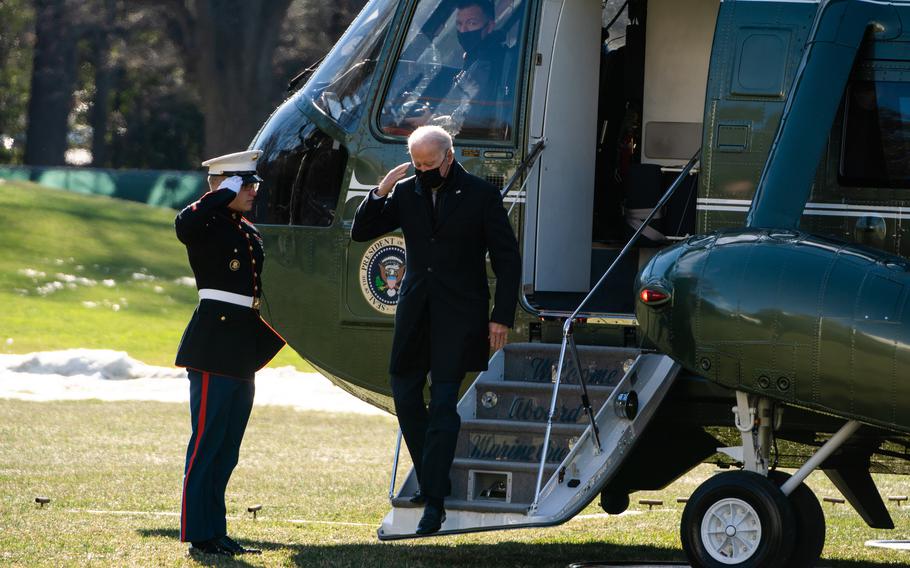 ATLANTA - President Joe Biden threw his full support Tuesday behind changing the Senate filibuster to ease passage of voting rights bills, using a major speech in Atlanta to endorse an idea increasingly backed by Democrats and civil rights activists seeking momentum on what has been an intractable issue.

The remarks from Biden, who was a senator for 36 years, amounted to his strongest endorsement yet of changes he had resisted for most of his career. The president made clear that he, like many others in his party, now believes the filibuster is being abused to block legislation that is fundamental to democracy.

"The United States Senate, designed to be the world's greatest deliberative body, has been rendered a shell of its former self," Biden told hundreds of college students, civil rights activists and elected officials at the Atlanta University Center. "I believe that the threat to our democracy is so grave that we must find a way to pass these voting rights bills."

If the Senate does not at least agree to debate the voting bills, "we have no option but to change the Senate rules, including getting rid of the filibuster for this," Biden said, to applause.

Much of the speech was a blistering attack on Republicans of the kind Biden has long avoided, taking aim at those opposing voting rights measures in Congress as well as those enacting voting restrictions in the states.

"The facts won't matter. Your votes won't matter," Biden said. "They will just decide what they want and then do it. That's the kind of power you see in totalitarian states, not in democracies."

Under the Senate's filibuster rules, most bills need 60 votes to pass, a threshold that is increasingly difficult to meet in the polarized chamber. The Senate is split 50-50 between the parties, and Republicans are almost entirely unified against the voting rights bills.

Many civil rights activists are frustrated that Biden has not pushed harder to protect the vote, and some stayed away from the president's visit. The Rev. Al Sharpton met with Biden after his address, saying, "I told the president he gave a monumental speech and, though I have been challenging him for months to be forthcoming, it was better late than never."

Vice President Kamala Harris, herself a former senator, also embraced amending the filibuster as she spoke before Biden at the Atlanta University Center, sandwiched between two historically Black institutions in a state that is steeped in civil rights history.

"Nowhere does the Constitution give a minority the right to unilaterally block legislation," Harris said. "The American people have waited long enough."

The Democratic efforts are focused on two bills: the John Lewis Voting Rights Advancement Act, which would restore the federal government's authority to review certain state voting laws to prevent discrimination, and the Freedom to Vote Act, a broader bill that would create national rules for voting by mail, early voting and other parts of the electoral process.

Senate Majority Leader Chuck Schumer, D-N.Y., plans to bring a package of rules changes to the floor before Martin Luther King Jr. Day next week. On Tuesday, Schumer warned that the threats of voter suppression are not false - as Senate Republicans have claimed - but dangerous, and he indicated that Senate action could come as early as Wednesday.

"Failure is not an option for the democracy of America," Schumer told reporters.

Any shift would require the agreement of all 50 Democratic caucus members. But at least two centrists - Manchin and Sen. Kyrsten Sinema of Arizona - have resisted the changes, making the prospects for action uncertain at best.

While Manchin has spent weeks in negotiations with fellow Democratic senators over possible rules changes, he told reporters Tuesday that he was not interested in changing the Senate's rules on a party-line vote.

"We need some good rules changes, and we can do that together," he said. "But you change the rules with two-thirds of the people that are present so it's Democrats, Republicans changing the rules to make the place work better. Getting rid of the filibuster does not make it work better."

In Atlanta, the president did not point a finger at specific senators by name, but he said the Senate vote would mark a turning point in American history.

"Will we choose democracy over autocracy? Light over shadows? Justice over injustice? I know where I stand," Biden said. "The question is, where will the institution of the United States Senate stand?"

Biden's speech is the latest move in an increasingly bitter partisan fight over voting. Democrats are angry at an array of voting restrictions imposed by GOP-led states, including Georgia, where Biden visited King's crypt on Tuesday before making his speech.

Republicans have made clear they will not take part in any effort to rewrite the Senate rules to pass the voting bills. At a Capitol Hill news conference Tuesday, more than a dozen Senate Republicans blasted efforts to change the filibuster. Several quoted Schumer's own past remarks on the topic, including a 2005 comment that eliminating the rule would spell "doomsday for democracy."

"Here we are today, with them eating their words," said Sen. Shelley Moore Capito, R-W.Va. "That's hypocritical at the face of it."

Several senators in the Democratic caucus who signed a 2017 letter arguing for the preservation of the 60-vote threshold for legislation said circumstances have changed amid Republican efforts to undermine voting rights across the country.

One of them, Sen. Angus King, I-Maine, said he believed the upcoming vote would be the most important one he takes in his life.

"It's ironic in the extreme to enshrine the principle of bipartisanship here in the Senate to the extent that we can't repair damage done to the democracy by 100 percent partisan legislatures" around the country, King said.

Reflecting the lack of a clear path forward, Democrats have not arrived at a unified proposal for amending the filibuster.

Discussions have centered on two main alternatives: creating a carve-out that would simply exempt voting rights legislation from the 60-vote threshold, or returning to the "talking filibuster," which would require senators to physically speak on the floor to block a vote on legislation.

Historically, that requirement has led to marathon speeches, as dramatized in movies such as "Mr. Smith Goes to Washington." But currently, senators only have to state their intention to block a bill, making the tactic far easier.

Biden on Tuesday called on Congress to pass both the Freedom to Vote Act and the John Lewis Voting Rights Advancement Act immediately. He has made phone calls and met virtually with a handful of Democratic senators in recent weeks, and he signaled that his patience is waning.

"I've been having these quiet conversations with members of Congress for the last two months. I'm tired of being quiet," Biden said, striking the lectern with his palm.

But notably absent was Stacey Abrams, who has been at the forefront of registering voters in Georgia and is running for governor. Seth Bringman, a spokesman for Abrams, said she "has a conflict, expressed her support and will continue to."

Before leaving Washington earlier Tuesday, Biden dismissed the notion of any friction between him and Abrams, telling reporters he was insulted by the question. White House press secretary Jen Psaki said Biden and Abrams held a "warm" phone call earlier Tuesday. Abrams, in a statement late Tuesday, thanked the president and vice president "for returning to Georgia to continue their steadfast advocacy for passage of federal legislation to protect the freedom to vote."

Still, a number of civil rights groups announced boycotts of Biden and Harris's visit, expressing impatience with the lack of action from Washington. Psaki declined to comment on the protests, noting that Biden was flying with a "full plane of congressional leaders and advocates for voting rights" and meeting with an array of civil rights leaders in Georgia.

Republicans, many embracing the discredited notion that Trump won the 2020 presidential election, dismiss Democrats' complaints about the new state-level voting restrictions and argue that the changes are needed to prevent fraud and restore faith in the vote.

Georgia's law, for example, expands voter ID requirements, imposes new rules on early voting, and forbids handing out food or water to people waiting in line to vote, among other measures.

"If the Democratic leader tries to shut millions of Americans and entire states out of the business of governing, the operations of this body will change," he said. ". . . But not in ways that reward the rule-breakers, not in ways that advantage this president, this majority, or their party. I guarantee it."

Five times since the Voting Rights Act was first passed in 1965, Republicans have voted to reauthorize it, but GOP support for key enforcement provisions has all but evaporated since the Supreme Court gutted them in recent decisions. Only Sen. Lisa Murkowski, R-Alaska, voted with Democrats last year to advance the John Lewis bill, which would restore federal oversight of election laws in jurisdictions with a history of racial discrimination.

The Freedom to Vote Act, meanwhile, has garnered no Republican support. It not only sets a single nationwide minimum standard for early voting and vote-by-mail in a bid to reverse some of the new state-level GOP laws, but it also aims to overhaul a wide range of election and campaign-finance practices.

DeBonis and Wang reported from Washington. The Washington Post's Vanessa Williams in Washington contributed to this report.