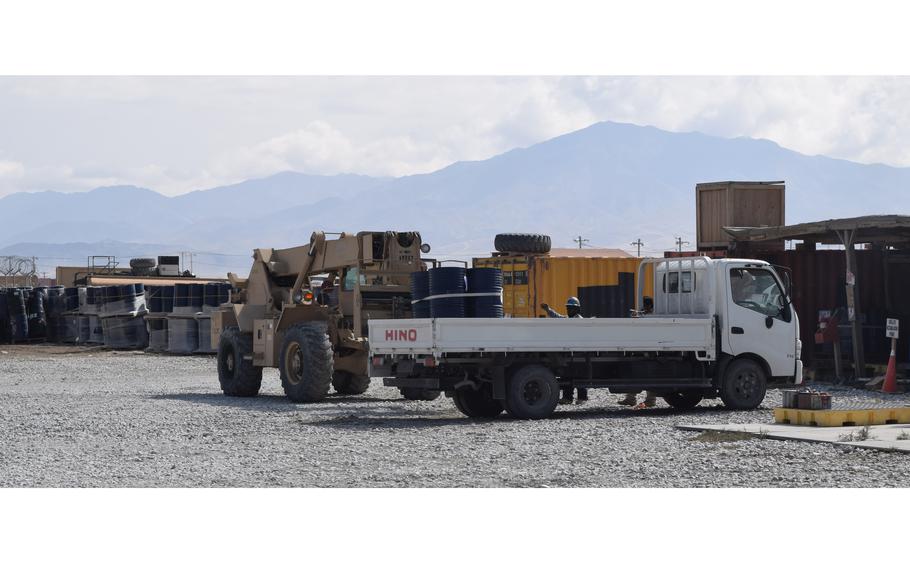 Drums of used fuel are transported to the hazardous materials yard operated by contractor Fluor at Bagram Airfield, Afghanistan, in 2014. A federal judge is allowing a lawsuit again Fluor stemming from a 2016 suicide bomber attack at Bagram to proceed, according to court documents. (Patrick LeBlanc/U.S. Army)

A federal court in South Carolina is allowing a group of Americans to go ahead with their lawsuit against a contractor over a 2016 suicide attack at Bagram Airfield, Afghanistan, that killed or injured nearly two dozen people.

Texas-based Fluor Corp., which the military hired to provide services like construction and security at bases throughout Afghanistan, was seeking dismissal of the suit. On Thursday, a judge ruled for the 13 plaintiffs, who allege that Fluor was negligent.

“Fluor’s responsibility included monitoring and supervising its employees and subcontractors. Fluor utterly failed in this regard, allowing this terrible tragedy,” attorney Tony Buzbee, whose firm is lead counsel for the plaintiffs, said in a statement Friday.

Thursday’s ruling means the consolidated cases can now be tried before a jury. The plaintiffs have yet to quantify their damages, Buzbee told Stars and Stripes. A contracting officer talks with an employee at the hazardous materials yard operated by contractor Fluor, at Bagram Airfield, Afghanistan, Oct. 14, 2014. A federal judge is allowing a lawsuit again Fluor stemming from a 2016 suicide bomber attack at Bagram to proceed, according to court documents. (Mary Barkley/U.S. Army)

The company argued that a trial could expose sensitive military information. It also contended that South Carolina is an improper forum for the complaints, as none of the plaintiffs are from that state.

However on Thursday, Judge Joseph Dawson III of the U.S. District Court in Greenville ruled that the company’s contracted work was administered in South Carolina, albeit remotely.

Fluor Corp. was unable to immediately comment when contacted Monday by Stars and Stripes.

Ahmed Nayeb, an Afghan who, according to court documents, worked for Fluor subcontractor Alliance Project Services, Inc., blew himself up Nov. 12, 2016, ahead of a Veterans Day run at Bagram Airfield.

The attack killed five people, in addition to Nayeb, and injured 17 others. Three American service members were among the dead.

Nayeb’s shift had ended, and he was not supposed to have been on base then, according to court documents.

A 2016 Army investigation found that Fluor had not properly supervised Nayeb and had “negligently entrusted” him with tools he used to make a bomb vest, even though he didn’t need those tools for his job.