Manchin's $1.8 trillion spending offer appears no longer to be on the table 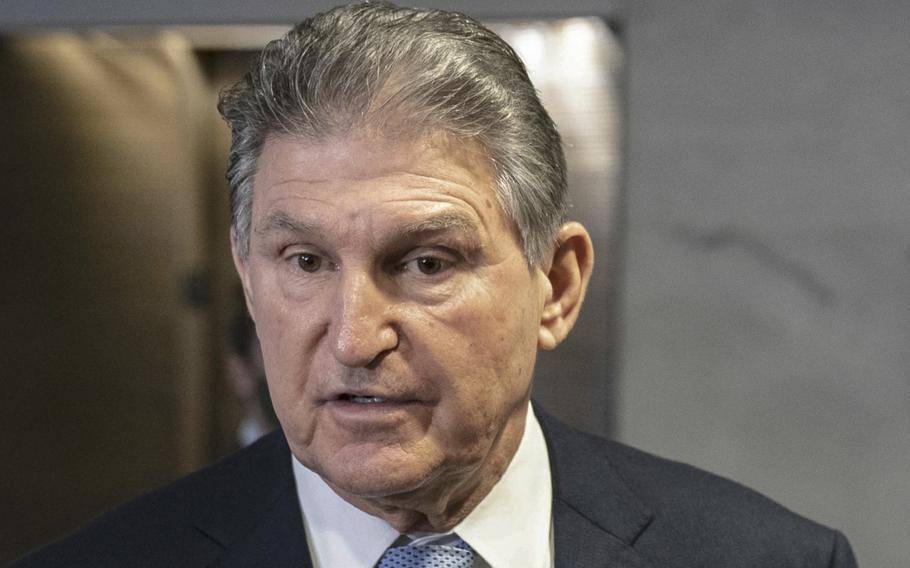 About four weeks later, the West Virginia Democrat has made clear that he does not currently support advancing even that offer following a breakdown in negotiations between Manchin and the White House right before Christmas, three people with knowledge of the matter said.

Manchin said publicly this week that he was no longer involved in talks with the White House over the economic package. Privately, he has also made clear that he is not interested in approving legislation resembling Biden's Build Back Better package and that Democrats should fundamentally rethink their approach. Senior Democrats say they do not believe Manchin would support his offer even if the White House tried adopting it in full - at least not at the moment - following the fallout in mid-December. The people spoke on the condition of anonymity to discuss private conversations.

Negotiations deteriorated quickly in December after a White House news release named Manchin as the obstacle to passing the legislation. Manchin then surprised the administration by criticizing the bill on Fox News, after which the White House released a blistering statement calling his credibility into question. Manchin, who has drawn protesters' ire because of his opposition to the legislation, later said the decision to name him in the news release imperiled the safety of his family.

The White House has continued to project optimism that it will eventually secure Manchin's vote and approval of a major economic plan by Congress. And Manchin's $1.8 trillion counteroffer suggested that much common ground between the two sides remained on the policy substance. He said in recent days that he supports much of the administration's climate agenda, for example.

But Democratic leaders in Congress have abruptly pivoted from trying to complete the economic package to addressing voting rights legislation, leaving unclear the fate of the White House's chance to remake big parts of the U.S. economy and provide the biggest-ever investment in fighting climate change.

Manchin has talked with a range of public officials trying to sway him on Build Back Better, such as senior White House aide Steve Ricchetti; Larry Kudlow, who was an adviser to President Donald Trump; and Sen. Mitt Romney, R-Utah, among others.

White House allies, including several officials in the White House itself, have in recent days expressed confusion as to how the administration could pass up on the potential for $1.8 trillion deal that would amount to one of the most significant pieces of domestic policy in decades.

Manchin's offer included permanent funding for universal prekindergarten, an expansion of the Affordable Care Act and hundreds of billions of dollars in climate-related spending - measures staunchly opposed by congressional Republicans. His plan also included support for a tax on billionaires, which would amount to the most aggressive plans to reduce wealth inequality in modern American history. And Democrats may not see another majority in Congress for many years.

"A $1.8 trillion package along the lines of what Manchin offered last month would be one of the most transformative, progressive pieces of legislation in modern history," said Ben Ritz, a budget expert at the Progressive Policy Institute, a Washington D.C. think tank. "The White House should absolutely take it if they can."

But for several reasons, it is unclear whether the White House could accept Manchin's plan, even if it wanted to - not the least of which is the confusion now over whether Manchin would vote to approve it.

In addition to excluding the expanded child tax credit, a centerpiece of Biden's anti-poverty agenda, Manchin's offer included no funding for housing and no funding for racial equity initiatives, two people familiar with the matter said, speaking on the condition of anonymity to reveal details of the private negotiations. Numerous congressional Democrats have had other demands for the package, such as an expansion of Medicare benefits for seniors and a repeal of the deduction of a cap on state and local taxes.

These and other provisions might have to be incorporated into the final plan to secure approval. To pass the bill, Democrats cannot afford to lose any senators or more than three House members.

Additionally, Manchin's offer included proposed tax hikes that Sen. Kyrsten Sinema, D-Ariz., had already ruled out, people familiar with the matter said. And while Manchin did support substantial new climate funds, the underlying policy details of his proposed climate provisions remain unclear and could have proved difficult for the White House to ultimately accept.

Manchin's positions have been hard to pin down over the course of negotiations, leading to a fierce lobbying effort to swing his vote. In recent weeks, Sen. Mitt Romney, R-Utah, has tried seeing whether he could broker a bipartisan agreement over the child tax credit with Manchin, two people familiar with the matter said. Romney has offered a GOP alternative to Biden's expanded child tax credit, but the measure is opposed by the vast majority of Republicans.

It is unclear how far the discussions between Romney and Manchin have progressed. Manchin has been adamant that the child benefit include a work requirement for parents, whereas Romney's plan does not.

White House spokesman Andrew Bates said in a statement, "We are not going to comment on the details of private conversations with lawmakers."

With the president's economic agenda in limbo, some liberal groups say they plan to continue to pressure Manchin into approving the legislation.

"The policies we're fighting for - like letting Medicare negotiate prices - are incredibly popular in West Virginia, and Manchin is clearly not listening to people in his state," said Alex Lawson, executive director of Social Security Works, a left-leaning group. "Biden has to bring the full weight of the presidency to bear on Joe Manchin to get his vote to get Build Back Better across the finish line."

"I know the grass roots are not in any way giving up on Joe Manchin," Lawson said, "and we'll make it harder and harder for him to not listen to what the people in West Virginia are demanding he do."

Other liberals say it is important to engage with Manchin now and ensure Democrats do not blow an opportunity to enact sweeping legislation.

"Many progressives stand ready to compromise to get something done," said Rep. Ro Khanna, D-Calif., a member of the Congressional Progressive Caucus. "We understand that we have to earn Senator Manchin's vote, and I look forward to working with him and the White House to see where we can find common ground and what we can deliver."