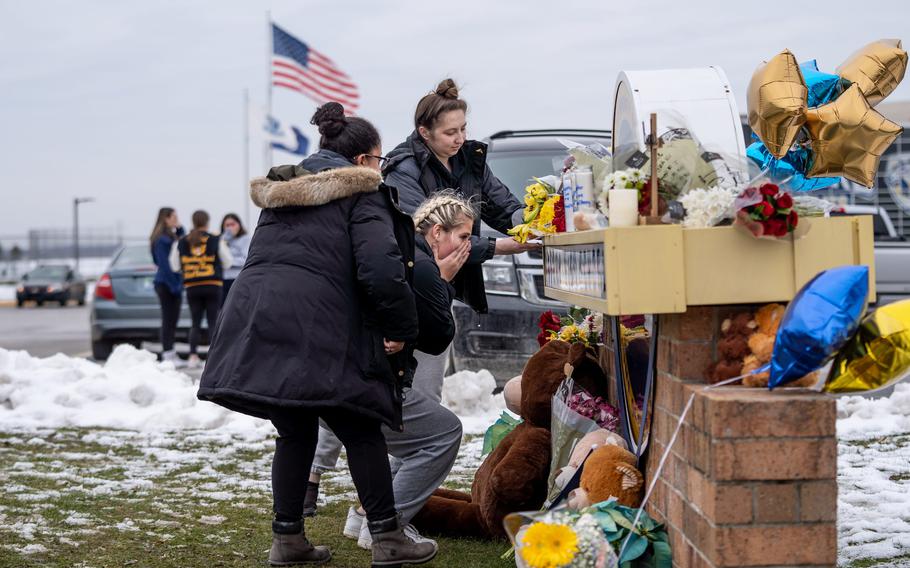 A group gets emotional after leaving flowers at a memorial at an entrance to Oxford High School on Dec. 1, 2021, following an active shooter situation at Oxford High School that left four students dead and multiple others with injuries. (Ryan Garza/Detroit Free Press/TNS)

DETROIT (Tribune News Service) — Survivors of the mass shooting at Oxford High School filed an updated $100 million lawsuit late Friday accusing the superintendent, principal and others of gross negligence, intentional infliction of emotional distress and failing to prevent the massacre.

The 107-page lawsuit added 11 new counts against school officials in the wake of new information that has emerged in the five weeks since investigators say 15-year-old sophomore Ethan Crumbley shot and killed four fellow students at Oxford High School and wounded seven others, including a teacher.

He faces four counts of first-degree premeditated murder and 20 other felonies and was bound over for trial Friday, hours before Southfield attorney Geoffrey Fieger filed the amended lawsuit.

Fieger filed the original lawsuit Dec. 9 on behalf of sisters Riley and Bella Franz, students at Oxford High who survived the shooting. Riley, a 17-year-old senior, was shot in the neck while next to Bella, 14, a freshman, as they exited a restroom during the attack, according to Fieger.

The amended lawsuit accuses Oxford Superintendent Tim Throne of knowing about threats against students, failing to prevent the attack and putting students in greater danger.

“The individually named defendants are each responsible through their actions for making the student victims less safe, causing the students to be in direct harm, and acting in a manner that was so reckless as to demonstrate a substantial lack of concern for whether an injury results,” Fieger wrote.

The amended lawsuit filed late Friday continues to list allegations against one man who Mullins says has not worked at the district in more than a year. Mullins has called the allegations false.

“(Fieger) has added some negligence counts to his complaint and now, as before, he doesn’t even know who he’s suing,” Mullins said Saturday.

Mullins previously said Oxford school officials will claim they are immune from liability.

“There is a criminal investigation and prosecution taking place and the Oakland County prosecutor has asked us not to comment upon the facts of the case so as to avoid any interference,” Mullins said. “Our priority is to get the kids back to school. There will be plenty of time for comment.”

The lawsuit accuses school officials of failing to stop an attack that inflicted physical and psychological injuries on students and spreads the blame among the highest-ranking Oxford school officials along with unidentified teachers and counselors.

The lawsuit includes details that have emerged in several court filings and appearances since the shooting.

On the day of the shooting, one of Crumbley’s teachers saw graphic drawings with violent images and pleas for help and reported what she saw to counselors, according to police and school officials.

Crumbley allegedly told counselors once he was taken to the office that his drawing was part of a video game he was designing and that he planned to pursue video game design as a career, Throne said in a statement. Crumbley remained in the office for about 90 minutes and worked on school assignments while the school tried to reach his parents.

After speaking to parents James and Jennifer Crumbley in the school office and again to Ethan Crumbley, school counselors concluded he did not intend on committing either self-harm or harm to others, Throne said.

His parents were informed they had 48 hours to seek counseling for their child or the school would contact Child Protective Services. They were asked to take their son home for the day, but they “flatly” refused and left without their son, Throne said.

Police have said they believe the handgun was concealed in Ethan Crumbley’s backpack.

Oakland County Prosecutor Karen McDonald has said a teacher reported Ethan Crumbley also was searching for ammunition on his phone at school a day before the shooting. School officials reached out to Jennifer Crumbley but never heard back.

Fieger accused high school Principal Steven Wolf of knowing about threats of violence from Crumbley, according to the lawsuit.

“Despite the posts and knowledge of threats of violence, defendant Wolf sent emails to the parents at Oxford High School instructing them not to share the posts, report the posts, or otherwise take the threats seriously,” Fieger wrote.

The principal made the situation worse, Fieger added.

“Defendant Wolf gave Ethan Crumbley the opportunity to retrieve the weapon from his backpack and shoot students at Oxford High School,” Fieger wrote. “... Wolf’s conduct was so reckless that it demonstrated a substantial lack of concern for whether an injury resulted when he acted as set forth above.”

The lawsuit faults two unnamed school counselors for failing to report that they found violent pictures and notes drawn by Crumbley that threatened violence against fellow students.

Failing to act provided “clearance for Ethan Crumbley to commit his acts of violence, allowing Ethan Crumbley thereby to have the opportunity to carry out his murderous rampage on an accelerated timeline,” Fieger wrote.