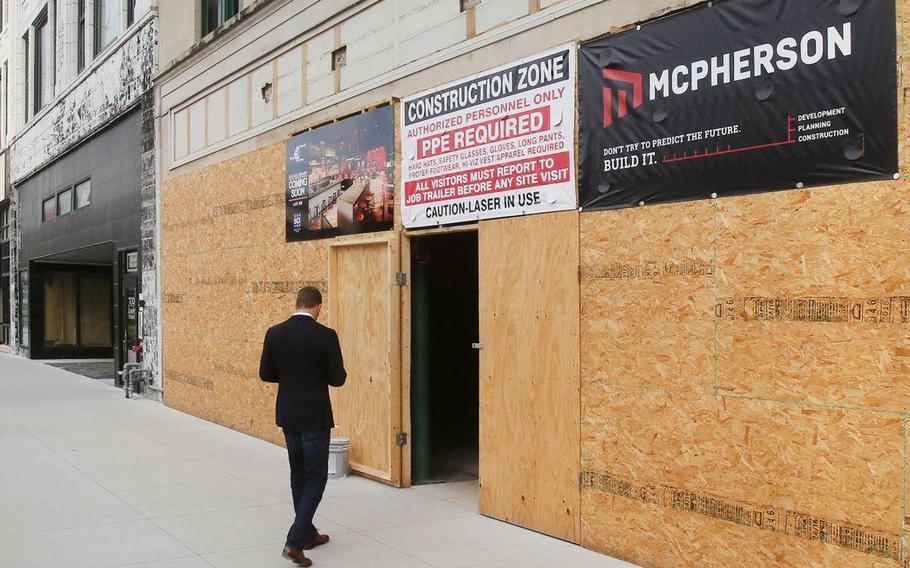 Matt McPherson, owner of Topeka, Kansas-based McPherson Contractors, walks towards an entrance of a project in June 2019. McPherson who had pleaded guilty to a scheme that involved companies defrauding the government by receiving $346 million for contracts set aside for veterans and minorities, was sentenced Thursday, Jan. 6, 2022. (Thad Allton/The Topeka (Kan.) Capital-Journal)

TOPEKA, Kansas (Tribune News Service) — A Kansas contractor was sentenced Thursday to two years, four months in prison for a federal crime linked to a scheme that defrauded the federal government.

Matthew C. McPherson, 45, has also forfeited to the government $5,516,786, which represented his share of the fraud proceeds, said Teresa Moore, U.S. Attorney for the Western District of Missouri.

McPherson was owner of Topeka-based McPherson Contractors when he cheated to obtain contracts between 2009 and 2018 that should have gone to firms led by disabled veterans and racial minorities, of which he is neither, prosecutors said.

“His greed and deception allowed him to enrich himself at the expense of disabled veterans and minority owners,” Moore said. “After forfeiting more than $5.5 million to the government and being sent to prison, he has learned the hard way that crime doesn’t pay.”

“Today’s sentencing sends a clear message that contractors unjustly enriching themselves at the expense of our nation’s veterans will not be tolerated,” said Gavin McClaren, acting special agent in charge with the central field office of the VA’s Office of Inspector General.

McPherson pleaded guilty in June 2019 to one count of conspiracy to commit wire fraud and major program fraud.

The crime was linked to a scheme in which prosecutors said construction firms defrauded the government by receiving $346 million.

McPherson admitted in his plea that he took part between September 2009 and March 2018 in a conspiracy to obtain contracts set aside by the federal government to be awarded specifically to small businesses owned and controlled by military veterans, service-disabled veterans and certified minorities.

McPherson owned a construction company that was not entitled to compete for those contracts, prosecutors said. The type of scheme involved is often called “Rent-A-Vet” or “Rent-A-Minority” fraud.

That firm was formed in 2009 with Stephon Ziegler, 61, of Weatherby Lake, Mo., a Black disabled veteran, as the nominal owner.

However, they said, Ziegler did not control the day-to-day operations or the long-term decision making of Zieson.

McPherson and his co-conspirators actually controlled and operated Zieson, and received most of the profits from Zieson, prosecutors said.

They alleged Zieson between 2009 and 2018 was paid about $335 million through about 199 federal contracts set aside to be awarded to small businesses owned by veterans and minorities.

McPherson and his co-conspirators also set up another company owned by Zieson employee and Native American Rustin Simon, 45, of Smithville, Mo., which fraudulently brought in more than $11 million through two federal contracts, prosecutors said.

Dingle, 50, of Parkville, Mo., awaits sentencing after pleading guilty in September 2020 to one count of conspiracy to commit wire and major program fraud. He also pleaded guilty, in a separate case, to one count of filing a false tax return.

Ziegler awaits sentencing after pleading guilty in May 2019 to making a false statement to the U.S. Department of Veteran Affairs.