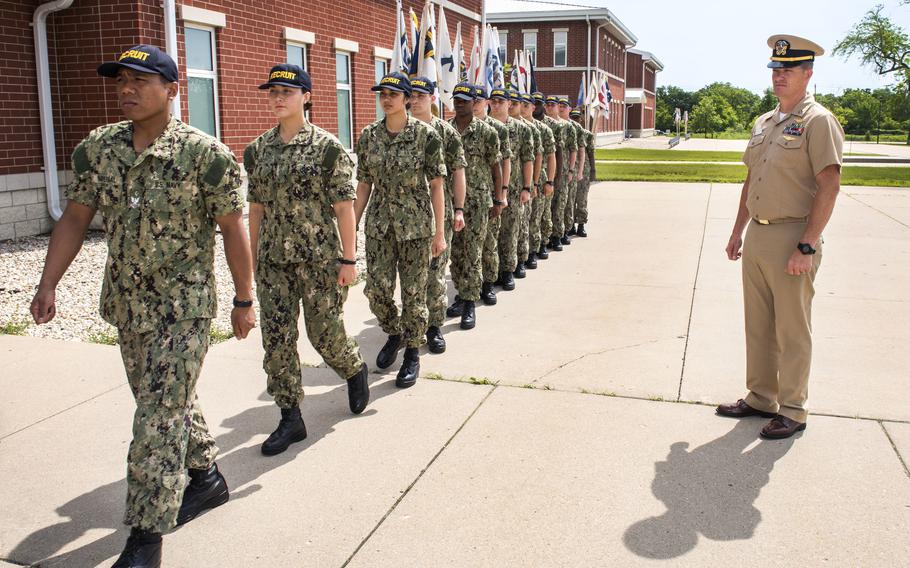 WASHINGTON – The Navy has extended its enlisted basic training by two weeks to ensure recruits are better prepared to enter the fleet – the first major change to the bootcamp structure in 20 years, the admiral in charge of naval service training said Friday.

“We are trying to give sailors some preventative maintenance … giving them some tools that they can use to prepare themselves as individuals to be part of a warfighting team,” she said.

Fleet Master Chief Wes Koshoffer, the top enlisted adviser for Navy manpower, personnel, training and education, said the updated training was needed as competition with great-power countries, such as China and Russia, has caused a “sense of urgency” to ensure sailors are properly prepared.

“We are committed to … looking at every aspect of what we do to optimize, to increase performance because our near-peer competitors are working hard in the same manner that we are,” he said. “The development of sailors is part and parcel -- if not the single-greatest -- advantage that we have over other militaries in the world.”

The new curriculum was designed to address some of the issues that Navy leaders see in the fleet with incoming sailors reporting to their first commands and prepare recruits for life after bootcamp, Couture said.

“[We train on] what can they expect when [recruits] get to the fleet and as they continue on in their training,” she said. “It's reinforcing the things that they've learned in the first eight weeks, giving them more practical applications, more scenario-driven [and] more hands-on training.”

It is the first time such a major overhaul to bootcamp has occurred since the early 2000s, Couture said. The extra two weeks will also include training in life skills, such as organization, time management, self-awareness, goal setting and financial management.

“Many of our recruits come here and it's the first time that they're really out on their own,” Couture said. “They have a steady paycheck and for many of them, [it’s] their first significant career choice, so we know there are things we need to teach them about some basic living on their own.”

The training will also incorporate some key personnel problems that the Navy has been working to address, such as preventing suicide, sexual assault and sexual harassment, she said.

“We believe very strongly that those types of behaviors are directly impacting warfighting readiness and the performance of our sailors,” she added.

The added two weeks is not expected to slow down the flow of new sailors into the fleet, Couture said. The Navy still intends to bring in new recruits and graduate sailors from bootcamp weekly.

“Our nation is depending on us to bring the Navy the nation needs to be competitive, to remain the number one Navy in the world,” Koshoffer said. “So we're looking at every possible aspect of how to increase sailor performance at every level in our Navy from the senior most leader to the first and last recruit in the door.”