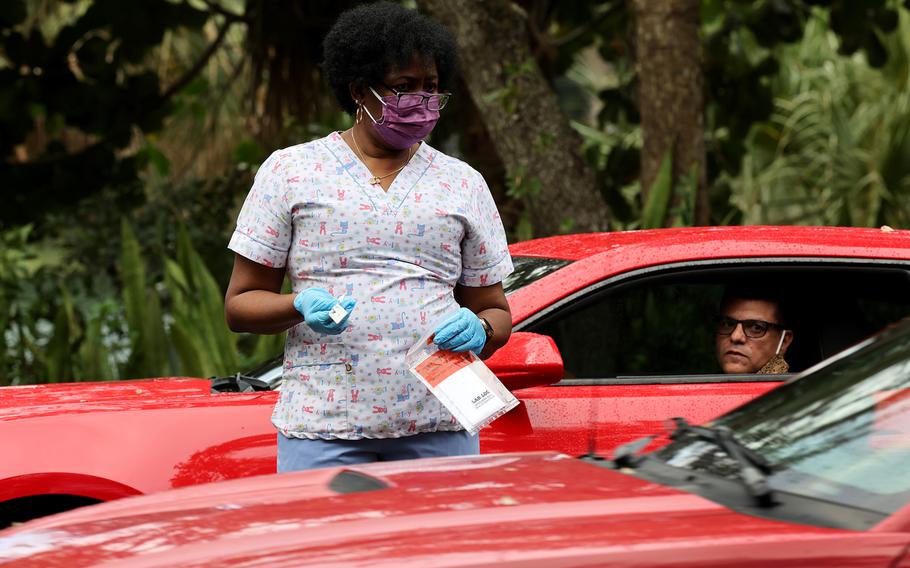 MIAMI (Tribune News Service) — Florida’s rocketing number of COVID-19 cases likely will peak by mid-January as the highly contagious omicron variant potentially infects most of the state’s population during this wave alone, according to disease modelers with the University of Florida’s Emerging Pathogens Institute.

UF biostatisticians and scientists said they revised their forecast for the state’s omicron wave to account for the astonishing speed and breadth with which the virus was spreading through Florida in December, leading to record numbers of COVID-19 cases during the state’s fourth wave of the pandemic.

The university’s model still calls for omicron to cause fewer deaths than prior surges of the pandemic, and like past waves this one is expected to diminish with the same speed that it spiked — making for possibly one of the shortest though still devastating waves of the pandemic.

“Everything points to much faster dynamics than we saw at first,” said Ira Longini, a UF professor of biostatistics and co-creator of the university’s omicron model.

To account for what they were seeing in Florida and the United States in December, UF scientists shortened the model’s projection for omicron’s incubation period to about three days instead of five days, which means that an infected person can begin spreading the virus about two days after contracting the virus, regardless of whether or not they have symptoms.

“If they’re going to get symptoms, on average it’s on the third day of their infection,” Longini said. “So by then they’ve already been transmitting it for a whole day while they were still asymptomatic.”

By comparison, the delta variant has an incubation period of about four days, which is faster than the median of five or more days seen in the original version of the virus, according to a recent report from the Centers for Disease Control and Prevention.

Florida reported the state’s first known case of the omicron variant on Dec. 6, and as the virus spread rapidly UF scientists quickly began to understand why the strain was causing an exponential growth in infections and reported cases, said Thomas Hladish, a research scientist in UF’s department of biology and a co-author of the model.

“The increase was so pronounced that as soon as we had like two days of data about that increase, we could have at that point said quite a bit,” Hladish said. “Most of what we would have needed to know we would have known.”

Hladish said the most significant change in the model was shortening the time from when someone contracts the virus to when they become contagious.

Omicron’s shorter incubation period explains why graphs of Florida’s most recent COVID-19 wave show a steep, almost vertical line of ascending cases in December — information the UF modelers did not have when they created their initial forecast using data from South Africa for November.

And though omicron appears to cause a shorter infectious period than other variants, Longini said, people with omicron are more contagious during that time than those who contracted earlier strains of the virus. He said a typical omicron infection will cause a person to be infectious for about a week.

“Some people will test positive for many days after that,” he said, “but it looks like the infectious period is about five days.”

There is also evidence that omicron causes more mild disease than prior strains, though Longini said it’s not clear how much of the disease’s severity may be reduced by existing immunity in the population from vaccination and prior infection.

As Florida nears the projected peak of the omicron wave in mid-January, UF modelers predict the state will top out at about 90,000 reported cases a day.

On Friday, Florida reported to the CDC 76,887 cases — the state’s largest single-day increase on record for the pandemic.

However, variations in daily cases are highly affected by the reporting process, including the amount of time that passes from the day an infected individual is tested to the time a case is reported by the state.

Hladish said disease modelers are less certain about the exact number of daily cases that Florida will report at the peak than they are about the timing of that peak being in mid-January.

In fact, the model suggests that Florida may have already passed the peak of total infections — the sum of reported cases plus people who were infected but did not get tested due to mild or no symptoms or other reasons. But cases have not peaked yet because of the time it takes for tests to be processed and reported.

“We looked at many different assumptions in order to see what it takes to get the kind of extremely rapid growth in cases that we’ve observed, and we consistently saw that the peak was going to happen basically between like Jan. 5 and Jan. 12,” Hladish said.

“The peak may well have happened in infections,” he added, “but it’s a funny thing with how testing and reporting works that the data that come out for today are not about today. It’s really important to remember that.”

UF’s model for the omicron wave predicts that the total number of deaths caused by Florida’s omicron wave will likely be about one-third less than the state saw during the delta-fueled summer surge.

Though omicron is milder than prior strains, the model predicts that deaths from the omicron deaths will peak at about 300 a day “because of the sheer numbers of infected people,” Longini said.

At the peak of the delta wave, Florida experienced about 400 deaths a day, he said.

UF scientists said death predictions could be affected by the arrival of new COVID-19 therapeutics, such as antiviral pills designed to reduced disease severity. But they also had difficulty predicting mortality for the omicron wave and analyzing death patterns from prior waves due in part to repeated changes in Florida’s official reporting.

During the first 18 months of the pandemic that began in March 2020, data collected by the Florida Department of Health and reported on the CDC website counted deaths by the date they were recorded — a common method for producing daily stats used by most states.

But as the delta wave surged in August, the health department changed the way it reported death data to the CDC, giving the appearance of a pandemic in decline by counting deaths by the date they occurred.

In November, the CDC said it began to transition states to once again report deaths by the date they were reported.

Prior to the change in reporting deaths, Florida’s health department removed its online dashboard and stopped daily reporting of COVID-19 cases, switching to weekly updates that no longer included county-level information on hospitalizations and deaths.

For scientists trying to develop a tool to assess the COVID-19 epidemic in Florida, the constant changes are a challenge.

“It really interferes with our ability to make sense of patterns, make sense of what happened when you’re changing data collection midstream,” Hladish said. “This has happened several times at this point, how deaths are certified. Then changing from daily to weekly reports. Some things that previously were released by the state now are released by federal authorities, and there are these persistent arguments between state and federal authorities about what the numbers should be and how to interpret them.

“It makes the scientists’ job very difficult,” he said, “when the criteria for collecting data keeps changing, and how the data is made available.”

“The reporting is tricky, both deaths and cases,” he said. “Things aren’t getting reported that well, and there’s delays. They do it in patches. They ignore it. It’s really bad in Florida.”

One prediction that does not rely on data is what future variants of the coronavirus may mean for the pandemic, and on this question scientists do not always agree about the right answer.

Both Hladish and Longini said that SARS-CoV-2, the virus that causes COVID-19, is here to stay. And they both believe that coronaviruses will tend to mutate toward becoming more contagious and able to evade immunity, whether from vaccination or prior infection.

“Those are clear directions that give a virus an advantage,” Longini said.

But they disagree about whether future variants will cause more or less severe illness in infected people.

“But I don’t see a strong argument why the evolution of the virus itself would be toward less virulent strains,” he said, “mostly because most of the transmission occurs before the person becomes sick enough, especially this virus, and I don’t think it cares if somebody dies two weeks later.”

Hladish said he believes future variants will favor less virulence or severe disease, though not for biological reasons.

“Human behavior matters,” Hladish said. “Maybe with the first couple of people it’s not going to matter if the virus kills the host because it already did its transmitting. But if you have a pathogen that’s killing people left and right, then people are going to modify behavior and that’s going to reduce transmission.

“You don’t have to invoke a biological reason for why being virulent would reduce transmission,” he said, “because there is a behavioral reason.”

Yet Longini also sees a future where the virus that causes COVID-19 will become mild over time, not because of mutations in the virus but because of a rise in population immunity from vaccination and prior infection, similar to coronaviruses that cause the common cold.

“The long-term evolution in the population will be toward less and less severe disease,” he said, “because more and more people will be either vaccinated or immune, and it could become a disease of very young children. Not because the virus is less virulent but because the population level immunity keeps rising, especially as people get older they’re more likely to have immunity.”

Longini noted that it’s still not possible to measure long-term immune response to a virus that is barely two years old and for which vaccines became available in December 2020.

“But once you’ve been infected and/or vaccinated enough times,” he said, “maybe you develop immunity to severe disease, which we clearly have against seasonal coronaviruses. They don’t cause severe disease in humans anymore, but we get infected with them over and over.”