Colo. congressman and veteran to roll out democracy-boosting initiatives on Jan. 6 anniversary 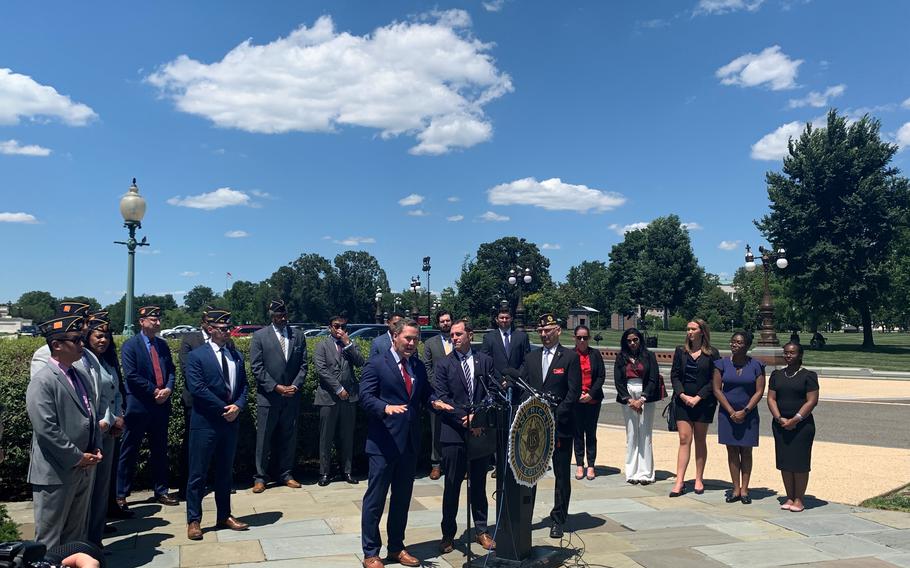 Buy Photo
Reps. Michael Waltz, R-Fla., and Jason Crow, D-Colo., both Army veterans, stand beside members of the American Legion at a news conference Wednesday in front of the Capitol to urge President Joe Biden to evacuate Afghan interpreters and their families ahead of the full withdrawal of U.S. forces from Afghanistan. (Sarah Cammarata/Stars and Stripes)

(Tribune News Service) — Rep. Jason Crow, the Aurora, Colo., Democrat and veteran whose actions helping fellow lawmakers escape a pro-Donald Trump mob attack on the U.S. Capitol a year ago were immortalized in a photograph, said he wants to use the anniversary of the event to convince the country "to take concrete steps to show that we are willing to stand up and fight for American democracy."

"We really are at a crossroads at this moment in our history," Crow told a group of reporters on a Zoom call Wednesday. "And really, it's calling for action by all concerned citizens, by all Americans, to reaffirm our commitment to democracy."

To that end, the congressman will be involved in unveiling three initiatives on Thursday that he hopes will lessen the partisan friction in the country while bolstering the shared interest in keeping American democracy alive. Crow will release a Democracy in Action Toolkit that will help people fight disinformation and conspiracy theories, he will issue a Democracy Day resolution and preside over testimonials by dozens of lawmakers on what they went through a year ago during the Jan. 6 riot.

"Those of us who were in the House gallery watching the debate below ended up being trapped there for some time," Crow said on the call. "We locked the doors and the Capitol police barricaded us in."

Crow, a former Army Ranger who served three tours of duty in Iraq and Afghanistan, said he went into "combat mode" once he realized a throng of Trump supporters were trying to beat down the doors to the House chamber. He and his colleagues removed their member pins so as to be less recognizable and phoned up loved ones.

"I never thought that the different parts of my life would converge in the way they did that day," he said. "But when we came under attack and I went back into that combat mode again, I thought about how we were going to fight our way — or make a stand in that chamber to get out alive — so much of that old mindset and mentality came back."

Crow was particularly vexed by the number of military veterans in the crowd that stormed the U.S. Capitol that day.

"I reflected on how years later, we could take so many different paths — that I'm sitting there as a member of Congress trying to uphold that certification process, trying to uphold a just and right election," Crow said. "On the other side is a veteran trying to kill me and my colleagues to try and stop that process. How did we get here as a country?"

While there has always been extremism and even hate groups in the United States, he said it's different now.

"This is different because it's being allowed to mainstream and grow in a way it never has before," Crow said. "And the reason that's happening is you have people at the highest levels of the land — you have members of Congress, you have the former president, you have others that are legitimizing it, that are normalizing it and that are inciting it."

He labeled Republican Rep. Lauren Boebert, the first-term western Colorado firebrand conservative who has raised eyebrows with her hard-right positions and her comments about Muslims, as a "substantial problem."

"It's different with her because her rhetoric is just so inciteful and hateful and such a direct danger to my constituents, people that I represent — immigrants and refugees and the Muslim community, and those who are disenfranchised and marginalized in so many ways," Crow said. "I'm more vocal about it because the threat has surged — the danger has increased precipitously in the last year."