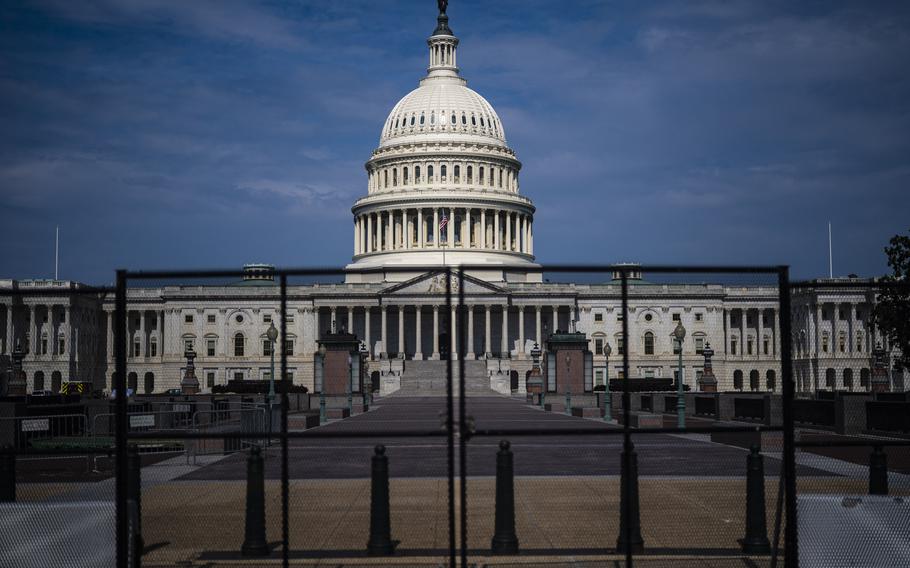 Fencing, erected after the Jan. 6 riot, is seen surrounding the Capitol building in Washington on July 09, 2021. (Jabin Botsford/Washington Post)

Senior Biden administration officials have concluded that the government’s Jan. 6 preparations were hampered by a lack of high-level information-sharing and a failure to anticipate how bad the day could be - lessons they say they are applying today in an effort to prevent another such attack.

Those conclusions, shared by people who spoke on the condition of anonymity to discuss how the federal government is trying to improve security a year after the insurrection, are not formal findings, the officials said. But they offer a kind of road map for how the Biden White House is attempting to prevent similar assaults on the democratic functions of government.

“The bottom line, we concluded, was there was insufficient information-sharing and coordination that was raised up to higher levels, and that needed to change,” said one senior administration official. There was also “insufficient anticipation of the kinds of things that could happen,” the official added.

Officials said they conducted the analysis not as a form of “finger-pointing” at the U.S. Capitol Police or the FBI - each of which has been faulted for failing to understand the threat they were facing on Jan. 6 - but to be better prepared to prevent future violence or unrest.

While inspectors general at multiple agencies have launched exhaustive autopsies of what the government did wrong and right in the lead-up to Jan. 6, most of those reviews are not complete, and some may take many months more to finish.

In the meantime, the Biden administration has to make decisions about how to better guard the country against spasms of politically motivated violence, a year after a mob seeking to overturn Joe Biden’s defeat of Donald Trump breached the walls of the Capitol and assaulted hundreds of police.

Liz Sherwood-Randall, President Biden’s homeland security adviser, said that since the inauguration, “we have worked hard to improve coordination, information-sharing, planning and preparation for a range of events and contingencies to ensure public safety. We are stronger today than we were a year ago - though we can never be complacent about the threats that we face from abroad and at home.”

Experts caution that the next such crises may not be in Washington, or involve organized groups.

The Washington Post has catalogued numerous instances in the weeks leading up to Jan. 6 when red flags warning of violence were quickly dismissed by the FBI. The Post also examined how Capitol Police officers were unprepared for a mob assault on the legislative branch.

A year later, officials say the threat picture for the area is much less alarming.

In a statement, the FBI said the agency “currently does not have any information indicating specific or credible threats regarding the anniversary of the Jan. 6 attack on the U.S. Capitol. As always, we remind members of the public to be vigilant and to report any suspicious activity to law enforcement.”

In an effort to keep senior officials on top of security threats in Washington, Biden’s National Security Council oversees weekly discussions among federal law enforcement agencies to discuss planned events such as protests and any related information that points to possible violence.

At those meetings, officials discuss what permits have been granted, as well as threat reports within the FBI and the Department of Homeland Security and any indicators of concern - such as travel reservations or hotel bookings - “to see if there might be a surge of people coming to town and how to adequately posture for that,” a second senior administration official said.

The officials insisted that the administration aims to encourage free speech, while also being prepared for the possibility that such events can devolve into violence or attract people intent on perpetrating violence against protesters.

“We certainly invite First Amendment activity and welcome it,” one official said. “The challenge that we have is that, yes, sometimes these activities turn violent, either because the protesters themselves seek violence or because there are counterprotests.”

Colin Clarke, a senior researcher at the security consulting firm the Soufan Group, said the Biden administration was generally correct in its conclusions about what to change to better secure the nation’s capital and the rest of the country - including by acknowledging the threat posed by domestic extremists.

“If you look at the forensics of all the things that went wrong that day, I think it is right to focus on the information-sharing part, and that’s one of the most important strategies to prevent it from repeating.”

After Jan. 6, Clarke said, he feared “far worse” violence would occur in 2021, and was pleasantly surprised when that did not happen.

Biden administration officials said they conducted tabletop exercises and simulations - one in May and another in late September - designed to stress-test the ability of federal, state and local law enforcement to respond effectively to crises in the capital region.

For the two decades after the Sept. 11, 2001, attacks, such exercises and drills often focused on the possibility of an internationally inspired terrorist attack. But the scenarios practiced by the Biden administration last year, one of which involved roughly 80 agencies, envisioned scenarios far closer to what happened on Jan. 6.

In a May exercise, a protest on the National Mall became violent and worsened when social media drew more people into the sprawling, fast-moving conflict. The September scenario involved simulated protests around the steps of the Supreme Court, followed by clashes that spread through the area, crossing the jurisdictional lines of various law enforcement agencies.

The first exercise was a tabletop simulation held at Joint Base Myer-Henderson Hall, a military base in Virginia, hosted by the Defense Department. It included the threat of a homemade bomb - another echo of Jan. 6. On that day, an unidentified person planted pipe bombs outside the national Democratic and Republican party headquarters. FBI investigators are still trying to identify and arrest the would-be bomber.

The second effort, conducted this fall in McLean, Va., was a virtual reality exercise stretched out over a week in which clashes outside the Supreme Court spread to other jurisdictions, requiring different agencies to communicate quickly and respond effectively to stem the violence, officials said.

The second senior official said the Biden administration drew a number of lessons from the simulations: among them that agencies need to improve their communications technology to deal with rapidly changing events, and that it is crucial to have a unified command structure to manage law enforcement responses to major incidents.

Security experts in and outside government said one area of ongoing concern is that despite all the efforts to improve security in the nation’s capital, the next outbreak of violence may occur elsewhere.

Clarke, the security researcher, said organizations such as the Proud Boys and Oath Keepers are well aware that they are now the subject of intense FBI investigation since Jan. 6.

“I think we’re far more concerned about the far-right ecosystem producing the next Timothy McVeigh,” he said, referring to the ex-soldier and security guard responsible for the 1995 bombing of a federal building in Oklahoma City that killed 168 people. “Lone wolf types, who may be waiting for their opportunity to act.”