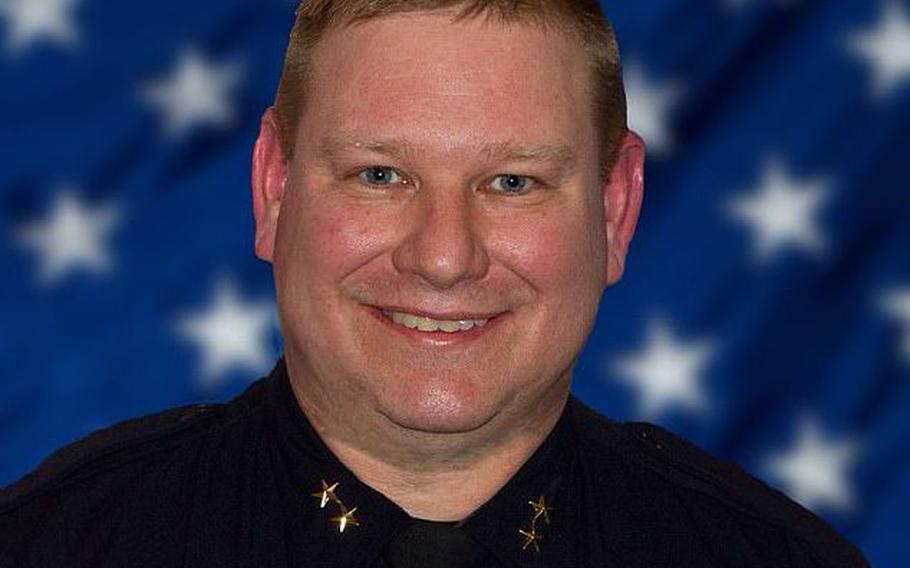 (Tribune News Service) — An assistant police chief in Kent, Wash., has been disciplined for posting Nazi insignia on his office door, embracing the rank of an official in Adolf Hitler’s dreaded paramilitary Schutzstaffel or SS — responsible for the murders of millions of Jews — and joking about the Holocaust.

Assistant Chief Derek Kammerzell,  a 30-year veteran of the Army who retired as a lieutenant colonel in 2019, was given two weeks off without pay by Kent Police Chief Rafael Padilla in July after an internal investigation concluded that Kammerzell knew full well the meaning of the insignia he posted above the nameplate on his office door in September 2020 — that of an SS “obergruppenfuhrer,” one of the senior-most ranks in the Third Reich. The insignia was taken down after four days when a detective in the investigations bureau, which Kammerzell commanded, filed a complaint.

The investigation, conducted by an attorney at the Seattle law firm of Stokes Lawrence, concluded that Kammerzell’s claim that he didn’t know the significance of the insignia and had heard about it after being referred to the television series “Man in the High Castle“ — where one of the main characters holds that rank — was not believable.

The series is an adaptation of Philip K. Dick’s 1962 novel, which presents a dystopian alternate future in which Germany won World War II and occupied America, where the Nazis continue their efforts to round up and exterminate Jews.

One of the key antagonists in the series, an American Nazi named John Smith, holds that rank, which is identifiable by a collar patch depicting an oak-leaf and two diamonds — the insignia Kammerzell posted on his door.

Moreover, Kammerzell acknowledged during the investigation that he once shaved his facial hair into a “Hitler mustache” and repeatedly told a joke to the effect that his grandfather had died in the Holocaust — when he got drunk and fell out of a guard tower.

He downplayed both incidents to investigators, stating the facial hair was part of “Movember,” a beard-growing fundraising event held every November to spotlight men’s health issues, and that the joke was 20 years old. The investigation found his explanations were convenient and less than credible.

The Seattle Times obtained the investigative documents from a citizens group calling itself “ No Secret Police,” which obtained them through a public disclosure request.

The investigation also references a photograph, taken during the city’s Octoberfest celebration in 2019, that appears to show Kammerzell, wearing lederhosen, giving the stiff-armed “heil Hitler” salute while standing behind Mayor Dana Ralph. Kammerzell explained that “someone may have taken a picture while they were waving.”

The investigation noted that Kammerzell “denied expressing any positive sentiments about either Nazis or fascist governments,” and city officials, after reviewing the investigation, concluded a two-week suspension was adequate to address sustained findings of creating a hostile work environment and conduct unbecoming.

In addition to the two weeks without pay — during which Kammerzell was allowed to take paid vacation to make up his salary — he was ordered to attend “cultural sensitivity training.”

However, Padilla did not sustain a violation of the department’s “truthfulness” policy, despite his obfuscation regarding his knowledge of the meaning of the insignia. A violation of that policy could have resulted in termination.

“I do not believe the investigation produced sufficient evidence that you were untruthful in asserting that you were not aware that the insignia you posted on your door was not used by non-Nazi German military forces,” Padilla wrote, adopting Kammerzell’s claim that he believed the insignia had also been used by post-WWII German NATO commanders.

“The fact is that you, an assistant chief, who must lead by example, posted a Nazi insignia on the door of your office,” Padilla wrote. “The insignia you posted is for a high-ranking official with the SS. To associated oneself with the SS, even negligently, is to associate oneself with the most despicable acts that human beings have perpetrated against each other, perhaps ever.”

Hitler’s SS and waffen-SS, the combat branch of the organization, were responsible for rounding up millions of Jews, gay and lesbian people, Roma and other “undesirables” for immediate execution or transportation to the Third Reich’s brutal labor and death camps. The SS murdered more than six million European Jews. Aside from their rank insignia, SS officers also often wore “totenkopf” — skull and crossbones — pins on their black uniform collars.

The city of Kent, in a statement, said the investigation showed Kammerzell “exercised poor judgment in this situation despite an otherwise stellar 27-year career with the Police Department“ and said he has apologized for his conduct.

“The City of Kent and Kent Police Department condemn racism in all its forms and are committed to investigate and, when necessary, impose appropriate discipline for every violation of our values and policies,” the city’s statement said. “The city took the allegations against Assistant Chief Kammerzell very seriously and stands by its independent investigation and discipline.”

A telephone message seeking comment left on Kammerzell’s line at the Kent Police Department on Monday was not returned. Kammerzell told The Kent Reporter in an email last week that he is “deeply embarrassed by this incident.”

“I wish I could take it back. I know now what that rank represents, and that is not what I value or who I am,” he said.

Kammerzell claimed that years ago someone in the department began to refer to him as the “German general” due to his Germanic heritage and he embraced the nickname, which “morphed” into “obergruppenfuhrer” after a retired colleague referred him to the television series, “Man in the High Castle.”

He claimed he did only cursory research to learn that the word translated to “senior group commander,” which he felt fit his position as head of the Investigations Division at the time.

However, the attorney who conducted the outside investigation for Kent, Krista Slosburg, said it “was not plausible” that after watching the series — all about Nazis — and searching the Internet as he claimed to have done that Kammerzell “would not understand the Nazi affiliation.”

News of the investigation and two-week suspension were met with shock and incredulity by officials at the Jewish Federation of Greater Seattle.

“These kinds of actions and insensitivity form the basis of what leads to genocide,” she said. “The Jewish community relies on law enforcement for safety. I have to ask if people of Jewish descent wouldn’t feel uncomfortable knowing this.”

Patashnik said she was concerned that the seemingly lenient punishment doesn’t send a strong enough message that antisemitism can be subtle and should not be tolerated any more than an overt hate crime.

“Had this officer posted something that was overtly homophobic or racist, would he have been treated the same?” Patashnik asked. “There is an education component here that I think needs to be addressed.”