Airman and wife make call for help on I-95, and Baltimore bakery rises to the occasion 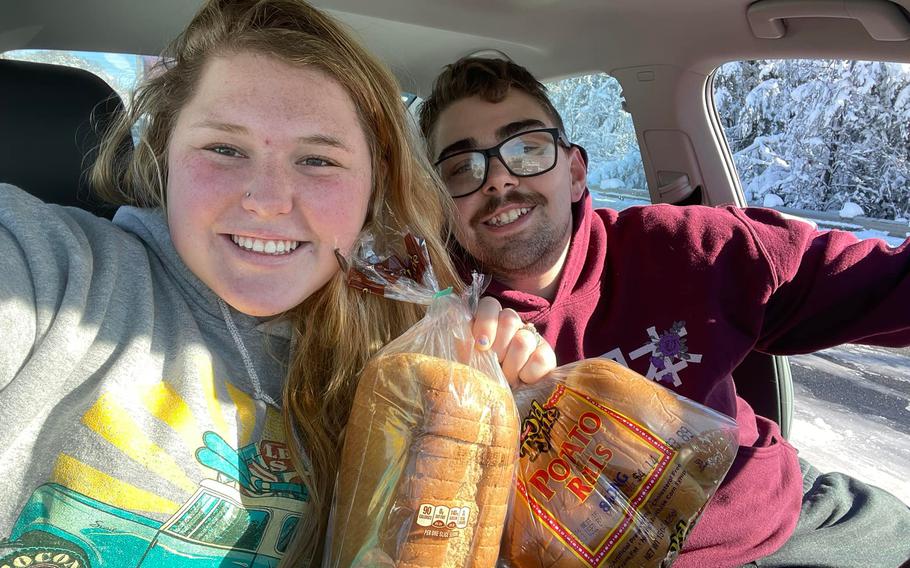 It was going to be the roadtrip from hell but Casey Holihan and her husband, John Noe, didn’t know that when they left their home in Ellicott City, Md., around 11 a.m. Monday morning. Skipping the trip wasn’t an option. The couple leaves for Germany next week for Noe’s job in the Air Force. (Facebook)

(Tribune News Service) — It was going to be the roadtrip from hell but Casey Holihan and her husband, John Noe, didn’t know that when they left their home in Ellicott City, Md., around 11 a.m. Monday morning.

Though it had snowed that morning, they figured the main roads would be clear. And skipping the trip wasn’t an option. The couple leaves for Germany next week for Noe’s job in the Air Force. It was their last chance to visit his family in North Carolina for potentially years.

After hours of stop-and-go traffic as they made their way south, by Monday evening, they became among the hundreds stranded in a massive, 48-mile backup along I-95 south of Washington amid a storm that froze roadways and dumped 12 inches of snow.

While Virginia transportation workers struggled to clear trucks blocking traffic, Holihan, 23, and her husband, 24, slept overnight in their car. In the morning, they checked social media for updates on road conditions and saw nothing.

With temperatures in the teens, they and hundreds of other drivers were cold, scared and very hungry.

By the light of day, Holihan realized that they were parked behind a truck for Baltimore’s Schmidt Baking Company. “We stared at it for a long time fantasizing about bread,” she said.

She decided to contact Schmidt’s customer service line to see if there was anything on the truck, and if so, would they be willing to give it away to the desperate travelers trapped without food for hours? After a conversation with a confused-sounding service rep, Holihan wasn’t sure she’d hear back.

But within 20 minutes, she had the phone number for Chuck Paterakis, a co-owner of Baltimore’s H&S Bakery, which owns Schmidt Baking Company.

Decades ago, his father, John Paterakis Sr., built H&S into the nation’s largest privately-owned bakery; they provide much of the bread for McDonalds and Popeyes chains nationwide and sell in retail shops from Virginia to Maine.

Giving back “is something that’s in our company values and it’s in our culture,” said Paterakis. “If you don’t give back to the community … you as a company are not going to be able to succeed.”

The truck’s driver, Ron Hill, had left the bakery on Belair Road the previous morning with 8,000 loaves destined for a distribution center in Norfolk. Paterakis urged him to give two or three loaves to anyone who wanted it.

“We just kind of started spreading out,” Holihan said, passing out armfuls of bread to weary motorists. She slipped and skidded on what she describes as a 3-inch-deep sheet of black ice coating the roadway.

Holihan tried to smile at everyone she saw. “Looking out for people is kind of my thing,” she said.

Altogether, Holihan said they passed out around 400 loaves of bread over the course of an hour. The experience was one of the worst of her life, but she’s glad that she and her husband were able to make it a little less awful for people.

When the couple returned to their car, famished and tired, they realized they hadn’t saved any bread for themselves. They walked back up to the truck and asked for another loaf.

They received a bag of potato rolls too, and Holihan bit into one.

“It was the best thing I’ve ever eaten in my entire life.”