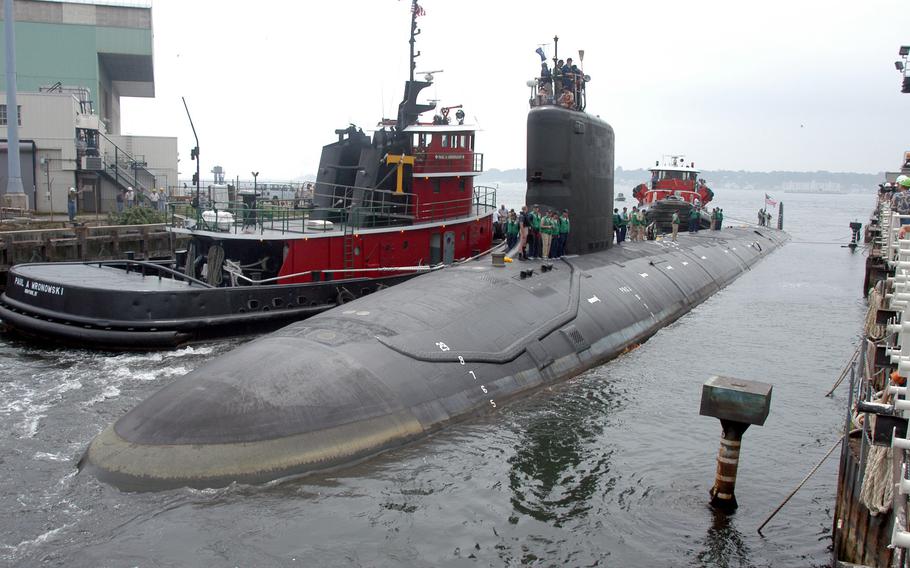 The USS Virginia returns to the Electric Boat Shipyard in Groton Conn., after its first sea trials in July 2004. A Navy nuclear engineer and his wife have been charged with repeatedly trying to pass along secrets on the design, operations and performance of Virginia-class nuclear submarine reactors, according to court documents. (Jack Sauer/AP)

The Navy and shipbuilding industry have reported as recently as this month that they are dealing with supply chain issues, shortfalls and delays caused by the COVID-19 pandemic, as well as workforce, production, supplies and space problems. Electric Boat President Kevin Graney has said in public statements multiple times during the pandemic that the company has had low staffing levels due to the coronavirus while hiring new employees also slows the construction process. Suppliers also have their own workforce issues, according to Electric Boat and the White House.

"I find that action to expand the domestic production capability for these supply chains is necessary to avert an industrial resource or critical technology item shortfall that would severely impair national defense capability," Biden said in a White House-issued memo on Dec. 21. "Ensuring a robust, resilient, and competitive domestic defense industrial base that has the capability, capacity, and workforce to meet the Virginia Class submarine undersea warfighting mission is essential to our national security."

According to the Defense Production Act, or DPA, that the White House invoked to expand production of Virginia-class submarines, presidents in general can, in order to "create, maintain, protect, expand, or restore domestic industrial base capabilities essential for the national defense," purchase "an industrial resource or a critical technology item for government use or resale," encourage the "mining of critical and strategic materials" and "the development of production capabilities," among other actions.

Virginia-class submarines are being built at the rate of two per year, although Congress is considering increasing that number to "something more than two boats per year," according to the Congressional Research Service.

"Scaling the production of Virginia Class Attack Submarines will ensure the U.S. Navy can meet its missions to maintain open sea lanes for global communication and commerce, enhance diplomatic partnerships, and grow a robust underwater warfare capability," the Department of Defense said in a news release. "Through the DPA, the U.S. Navy can make key investments with the manufacturers and suppliers executing the submarine shipbuilding plan."

The Day reported in June that problems with parts on the Navy's Virginia-class submarines failing faster than predicted could lead to more work for private shipyards such as Electric Boat.

"It's just not every day that the president of the U.S. designates the importance of production capability of a particular program like the Virginia Class sub program," U.S. Rep. Joe Courtney, D- 2nd District, said Wednesday. "Clearly this is part and parcel of a strategic review which has been going on for the last year by the new administration that recognizes our undersea mission is essential to our national security."

Courtney noted that the new $770 billion defense bill, signed by Biden last week, has money in it meant to help EB with workforce, supply chain and production capability issues.

"Biden's order dovetails with the defense bill, which just passed both houses," Courtney said. "Biden is sort of foot stomping how important and essential this whole production system is as well as not losing ground."

Courtney said about 6,000 suppliers feed into the Virginia-class program, noting that this number needs to grow so that "you don't have a part for a submarine where there's only one supplier because that's pretty fragile. If that company goes out of business or just stops producing, you're sort of stuck."

He also pointed out the benefit of the Asia-Pacific security pact among the U.K., U.S. and Australia.

"The pact opened up another door in terms of more work in Groton because Australia has fewer than 30 million people and they have no experience in terms of nuclear propulsion technology," he said. "The U.K. and the U.S. do have submarine construction programs, and there's no question they're going to be part of Australian production, which is still a ways off — there's an 18-month analysis going on right now."