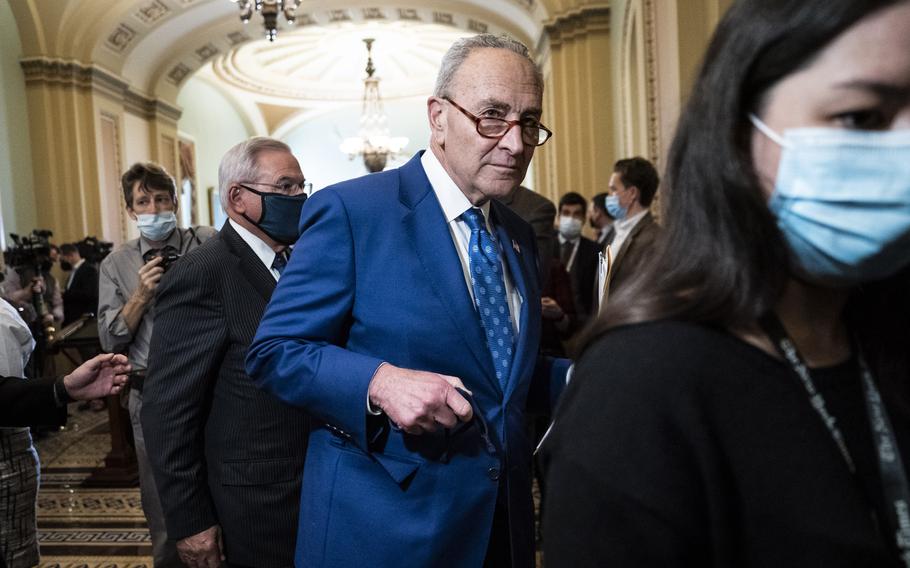 The announcement of the planned action by Jan. 17 represented Schumer’s strongest endorsement yet of trying to muscle through legislation that has been stymied because of Senate rules requiring a 60-vote threshold.

“We hope our Republican colleagues change course and work with us,” Schumer said in a letter. “But if they do not, the Senate will debate and consider changes to Senate rules on or before January 17, Martin Luther King Jr. Day, to protect the foundation of our democracy: free and fair elections.”

For the strategy to succeed, however, Schumer will need buy-in from two fellow Democrats — Sens. Joe Manchin III (W.Va.) and Kyrsten Sinema (Ariz.) — who have voiced skepticism or opposition to changing Senate procedures in a way that would be needed to push voting rights priorities across the finish line.

With Republicans unified against Democrats’ plans, the only way to pass legislation is to alter Senate filibuster rules. That would mean all 50 Democrats uniting in favor of both a rule change and underlying legislation.

In his letter, Schumer argued that the issue of voting rights presents one case where changing Senate rules is warranted.

“We must ask ourselves: if the right to vote is the cornerstone of our democracy, then how can we in good conscience allow for a situation in which the Republican Party can debate and pass voter suppression laws at the State level with only a simple majority vote, but not allow the United States Senate to do the same?” he wrote. “We must adapt. The Senate must evolve, like it has many times before.”

Republicans blasted Schumer for threatening to change the rules.

“Senator Schumer’s rash, partisan power grab should be seen for what it is — desperation and a failure to do what Joe Biden and Democrats ran on: unity,” Sen. Mike Lee, R-Utah, said in a statement.

In his letter, Schumer also made clear that Democrats will use this week’s anniversary of the Jan. 6 insurrection to build the case for protecting voting rights.

“Make no mistake about it: this week Senate Democrats will make clear that what happened on January 6th and the one-sided, partisan actions being taken by Republican-led state legislatures across the country are directly linked, and we can and must take strong action to stop this antidemocratic march,” he said.

Schumer assailed former president Donald Trump, who has perpetuated the false claim that the 2020 presidential election was rigged, and Republicans who have embraced and promoted that widely debunked allegation.

“Much like the violent insurrectionists who stormed the U.S. Capitol nearly one year ago, Republican officials in states across the country have seized on the former president’s Big Lie about widespread voter fraud to enact anti-democratic legislation and seize control of typically non-partisan election administration functions,” Schumer wrote.