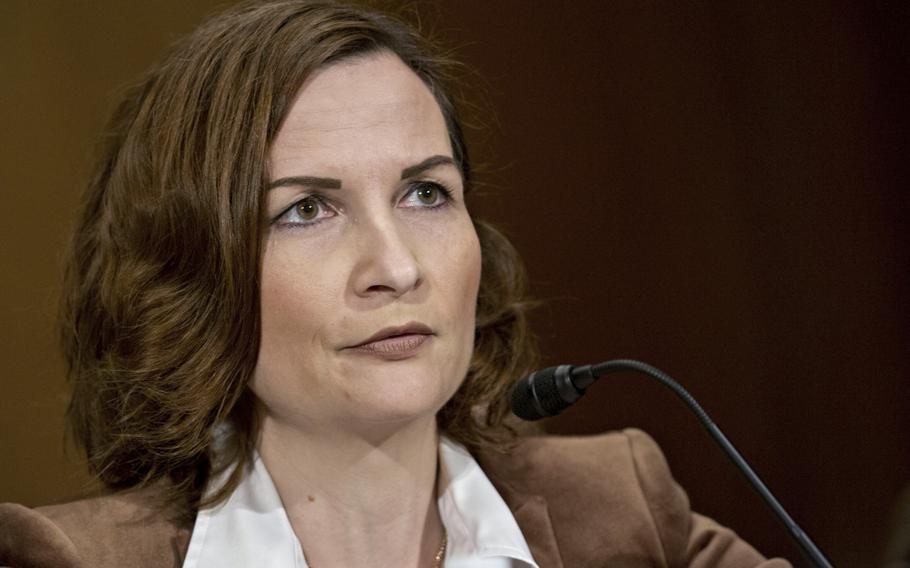 Chairman of the Federal Deposit Insurance Corp. Jelena McWilliams testifies in Washington, D.C., on Oct. 2, 2018. According to reports on Saturday, Jan. 1, 2022, McWilliams resigned her post on Friday, Dec. 31, 2021. (Andrew Harrer/Bloomberg)

One of the nation's top banking regulators, the chairman of the Federal Deposit Insurance Corp. (FDIC), resigned late Friday after a partisan clash with Democrats that she had described as a "hostile takeover."

Jelena McWilliams was appointed by President Donald Trump in 2018 to serve a five-year term as chairman of the independent regulatory agency. But following repeated disagreements with her Democratic colleagues over potential banking reforms, she issued a statement on New Year's Eve saying she would leave her post on Feb. 4.

The move is likely to give the Biden administration more control over the agency, and more leeway to aggressively police bank mergers and push the industry to prepare for the risks of climate change. Democrats hold a majority on the board, and Martin J. Gruenberg, an appointee of President Barack Obama, will serve as chairman temporarily, his third stint in the post.

Democratic members of the board had chafed at McWilliams's leadership in recent weeks, accusing her of using procedural tactics to stonewall their efforts to review the board's bank merger approval process. In a lengthy December statement, board member Rohit Chopra, who also serves as director of the Consumer Financial Protection Bureau, accused the board's leadership - without naming McWilliams - of "unsafe and unsound governance" for its unwillingness to consider proposed changes offered by a majority of board members.

"While members of the Board may differ on what, if any, new policies should be enacted, we should quickly solicit input from the public to identify potential policy options," Chopra wrote.

McWilliams, the board's only Republican, disagreed, blocking a review. Chopra called this "an attack on the rule of law."

McWilliams responded the next day, writing in the Wall Street Journal that Chopra had flouted long-standing FDIC policies in pushing his request and that the Democratic members of the board had tried to hijack the agency's staff in November by circulating a letter advancing the review while she was on a flight to Switzerland .

"Agency staff report to me as the CEO, and I have always ensured that board members have access to staff for discussions, briefings and technical expertise," she wrote. "The board members' letter was an attempt to seize control of the FDIC's staff while its chairman was on a nine-hour flight to Europe for official meetings."

McWilliams also suggested that her colleagues' intent wasn't to advance merger regulations but to oust her from the board.

"This conflict isn't about bank mergers," she wrote. "If it were, board members would have been willing to work with me and the FDIC staff rather than attempt a hostile takeover of the FDIC internal processes, staff and board agenda."

In the Dec. 31 statement released by the agency announcing her departure, McWilliams, who immigrated to the United States from what is now Serbia during the Balkan conflicts of the 1990s, praised the FDIC under her tenure for taking swift action to maintain stability and provide flexibility for banks and consumers in the face of the pandemic.

"The core of our financial system not only weathered the storm, but was a tangible source of strength for the American economy," she said.