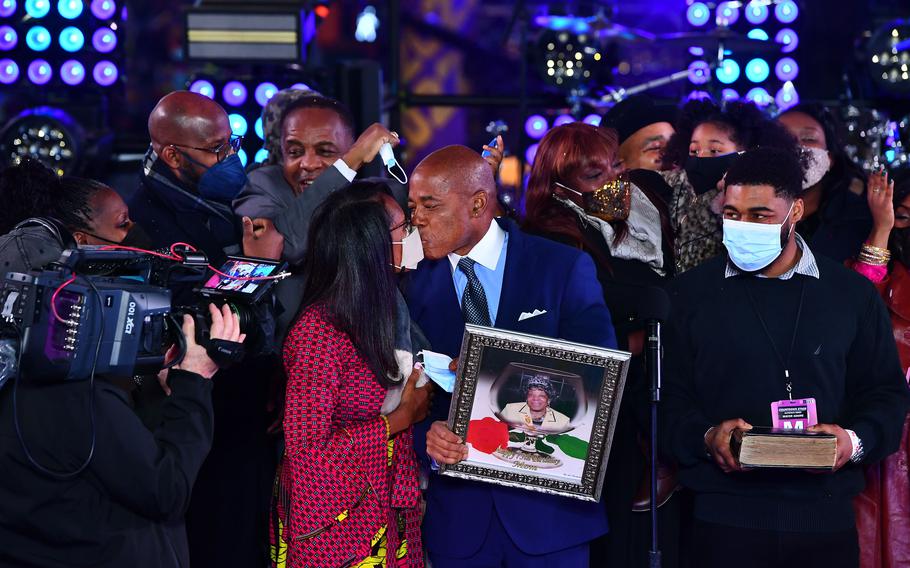 New York City Mayor Eric Adams is sworn in after the ball dropped in Times Square in Manhattan, New York on Jan. 1, 2022. (GREGG VIGLIOTTI for the New York Daily News)

Eric Adams was sworn in as the city’s 110th mayor in Times Square early Saturday — and he’s taking the helm amid an aggressively resurging pandemic with a long policy to-do list and a vow to turn the tide on decades of government “dysfunction.”

Adams, whose campaign mantra was “stay focused, no distractions and grind,” is the second Black mayor in Big Apple history. Holding up a framed photo of his late mother, Adams recited the oath of office on the main riser in Times Square before thousands of New Year’s Eve revelers immediately after the ball dropped to ring in 2022.

“New York is back,” Adams said as he walked off stage.

Before his swearing-in, the New York native waxed poetic about the “unbelievable” perseverance his city has shown in the face of COVID-19.

“It’s just great when New York shows the entire country how we come back,” said Adams. “It may be COVID, but the reality is the resiliency of our city and our country — we showed the entire globe what we’re made of. We’re unbelievable. This is an unbelievable city.”

Foregoing the traditional City Hall inauguration, Adams was initially supposed to be sworn in at an indoor Jan. 1 ceremony at the Kings Theatre in Brooklyn. But he relocated to the outdoors Times Square bash over coronavirus concerns as the omicron variant continues to ravage New York and the country.

Unlike outgoing Mayor Bill de Blasio’s swearing-in ceremony on the steps of City Hall in 2014 — an event which featured speakers snubbing his predecessor Mayor Michael Bloomberg — the Times Square bash had a more upbeat, less combative air to it.

Adams’ family and de Blasio joined him for the unconventional Times Square swearing-in — as well as roughly 15,000 revelers there for the quintessential ball drop, giving the new mayor a massive crowd to bask in.

But the celebration was dulled by the still-raging pandemic, which Adams will inherit as mayor.

Revelers were required to provide proof they were fully vaccinated, wear face masks and maintain social distancing at all times during the New Year’s Eve bash.

Two headliners for the event — LL Cool J and Chloe — canceled their performances, with the famous Queens rapper confirming he bowed out after testing positive for COVID-19. And, while the show went on at the Crossroads of the World, other celebrations in other parts of the globe like Toyko, Rome and Paris were canceled because of the highly contagious omicron variant.

The Times Square party was nearly canceled as well. Adams touted the fact that it wasn’t as a harbinger of hope.

“Even in the midst of COVID, in the midst of everything we’re going through, this is a country where hope and opportunity is always ever present,” he said in his pre-ball drop remarks.

His swearing-in over and done with, Adams has his work as mayor cut out for him.

The city is reporting tens of thousands of new COVID-19 infections every day as omicron continues to wreak havoc. Statewide, more than 76,000 people tested positive for COVID-19 on Friday — more than 22% of everyone tested in the state that day. Hospitalization and death rates are ticking up in the city as well, and Adams has vowed to make boosting vaccination rates and fighting COVID a top priority to avoid a return to the large-scale shutdowns of 2020.

Beyond the pandemic, he will likely focus much of his early agenda on reducing crime, improving the city’s quality of life and overhauling the Department of Education’s bloated bureaucracy. But he is sure to face obstacles.

Adams — a former NYPD captain, state senator and Brooklyn borough president — has staked out an ambitious and at times a controversial set of policy prescriptions, including reintroducing a plainclothes NYPD unit to crack down on crime, trimming the Education Department budget and rooting out what he repeatedly described on the campaign trail as a festering “dysfunctionality” across municipal government.

But so far, Adams hasn’t rolled out a list of objectives for his first 100 days in office, as many of his predecessors did.

And his ideological opponents are poised to push back on at least some pieces of his agenda — especially when it comes to law enforcement. Some began that effort two weeks ago when more than two dozen incoming City Council members urged him to reconsider his plan to re-institute punitive segregation — known more commonly as solitary confinement — at Rikers Island.

In response, Adams told the lawmakers, where to go.

It will not just be the City Council who’ll serve as a check on Adams, though. The city’s new comptroller, fellow Brooklynite Brad Lander, will be in place to audit agencies in the city’s vast bureaucracy. He will be sworn in Saturday morning in the cupola of the David N. Dinkins Municipal Building, just across the street from City Hall.

Adams, a self-professed workaholic who said he’d bring a mattress to City Hall so he can keep longer hours, announced several new appointments Friday before his swearing-in. They include Anne Williams-Isom as deputy mayor of health and human services, Manny Castro as commissioner of immigrant affairs, and Kevin Kim as commissioner for small business services.

And just hours before his swearing in, he released a busy schedule for the following day. On it, he planned to leave his Bedford-Stuyvesant home at 7:40 a.m. and arrive at City Hall around 8:30. At 9 a.m., he plans to hold a Cabinet meeting and at noon is scheduled to deliver his first speech to the city as its newly-minted mayor. An hour later, he is planning to sign off on executive orders, though he has not yet revealed the content of those orders. And at 3:15 p.m., he plans to give a press briefing outside the 103rd Precinct in Queens.

The packed schedule came in spite of the fact that Adams said he would catch some downtime Saturday to recharge before kicking off his administration.

“Everyone knows that my greatest time of downtime is to take a hot bubble bath with some roses,” he said Thursday. “That’s what I’m going to do on Jan. 1.”