As omicron spreads, New York City is once again a center of the pandemic 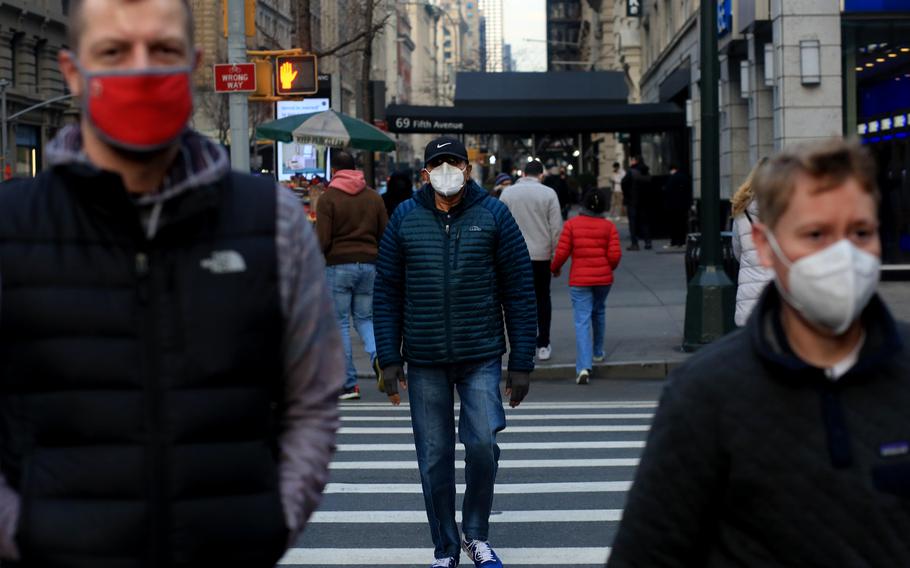 NEW YORK - When Kass Wu moved to New York City to attend university in the summer of 2020, it seemed that the worst of the pandemic was over. After a spring in which hundreds of people died of the coronavirus each day, the city was slowly beginning to reopen and life returning to normal. Wu, 31, was excited to explore her new home and meet people.

It wasn’t until this summer, a year after Wu arrived, that the city finally felt somewhat normal - an impression that proved fleeting, as New York yet again finds itself at the center of the pandemic. In recent weeks, the highly contagious omicron variant of the novel coronavirus has quickly spread through the city, which now has one of the highest rates of new cases in the country despite taking more precautions than many communities and having a vaccination rate higher than the national average. So far, hospitalizations have remained comparatively low, given the high number of infections, although the number of children hospitalized with covid-19 has increased dramatically this month.

“This summer, I got a little taste of New York, and I was starting to really like it,” said Wu, a student at the State University of New York College of Optometry. “Just when I thought everything was getting better, it’s hitting us again.”

City officials, businesses and residents are trying to strike a delicate balance - preventing a full-blown public health crisis while trying to keep the city open and running. This month, New York Democratic Gov. Kathy Hochul instituted a statewide requirement that masks be worn in all indoor public places unless businesses or venues implement a vaccine requirement.

Outgoing New York Democratic Mayor Bill de Blasio has flatly ruled out a lockdown as was imposed in the early days of the pandemic, and he announced this week that schools will reopen as planned on Jan. 3. But parts of New York are shutting down fully or partially of their own will. As the city logged record-high numbers of infections this week, officials struggled to provide basic services to New York’s 8.8 million residents.

The Metropolitan Transportation Authority started suspending subway service on Wednesday because there weren’t enough healthy transit workers to operate the entire system. As of Thursday night, service on three subway lines had been stopped.

Meanwhile, the New York City Fire Department has pleaded with residents to call 911 only if they were experiencing a “real emergency.” With a third of the agency’s paramedics out sick, department officials said the system was being overwhelmed by calls from people with mild covid-19 symptoms who wanted ambulance rides to hospitals to be tested for coronavirus infection. The New York Police Department canceled days off for any officer healthy enough to work through the New Year’s holiday after hundreds of officers tested positive for the virus.

“We’ve been working around-the-clock to surge reinforcements to communities as they battle omicron,” Zients said at a news briefing Wednesday, “helping to staff hospitals, administer monoclonal antibody treatments, transport patients, add testing capacity and get more PPE to where it is needed.”

Even without an official lockdown, many New York City businesses are struggling to keep their doors open during the critical holiday season. According to a survey from the Brooklyn Chamber of Commerce, 77% of small businesses in the borough have seen less business this holiday season than they did last year. Almost 60% of businesses have experienced employees calling out sick in recent days, and 20% were forced to close altogether during the holidays, according to the survey. Throughout the city, many bars and restaurants noted a dramatic drop in business.

“We’re really, really in a challenging position right now for a lot of these small businesses that were just barely hanging on,” Randy Peers, the president and chief executive of the Brooklyn Chamber of Commerce, told CBS New York.

Among the businesses that have been hit particularly hard by employee shortages is CityMD, a health-care company that runs 150 urgent care centers in New York and New Jersey. As of Thursday night, the company had closed dozens of clinics because of the number of its employees who had come down with the virus. Many of CityMD’s locations were packed in the days before Christmas as New Yorkers scrambled to get tested before spending the holiday with friends and relatives. The block-long lines for tests have largely disappeared in recent days, but at some testing sites this week, there were still lines out the door.

Still, city officials insisted that the famous Times Square New Year’s Eve ball drop would be held this year, but with limited spectator capacity, and Democratic Mayor-elect Eric Adams announced on Wednesday that he would take the oath of office in Times Square shortly after the ball drop.

Wu, who is outgoing and quick to spark up a conversation with a stranger, said she longs for the New York she experienced this summer as she tries to find safe ways to get out of her home and enjoy the city. She went out to dinner on Tuesday night, only to be spooked when she heard the table of women next to her downplay the threat of the virus.

“I will try to say hello to the people in my building, and they won’t say anything. I don’t know if that’s a New York thing or a covid thing,” Wu said. “But it’s hard to meet new people. No one wants anything to do with a stranger right now. I’m just feeling lonely.”

As the omicron variant surged in the city in recent days, more than half a dozen Broadway shows closed after breakthrough covid-19 cases among casts and crews.

Tyler Mell, a Brooklyn-based actor, said he feels a dual responsibility to his community. He wants to remain healthy and protect high-risk people like his homebound grandmother, whom he plans to visit Saturday, but he also knows that theaters need people to fill the seats. On Wednesday, he went to the Classic Stage Company’s theater double-masked to see a revival of Stephen Sondheim’s musical “Assassins.”

“I’ve been trying to do my part to support theater,” he said. “And it’s been so great to be back. I saw Company on the night Stephen Sondheim died, and it was just an incredible experience.”

The 25-year-old native of Cold Springs, N.Y., said he feels safe in theaters. He is vaccinated, has received a booster and double-masks when he attends performances. During the height of the pandemic, as live theater disappeared, he went back to college and finished his BFA degree. He graduated in December and hopes to start auditioning in the spring - if theaters do not shut down again.

“You just can’t compare this to what it was like in 2020. We now have vaccine mandates and leaders who are taking this seriously,” he said. “We have figured out how to live with this thing. I think it’s going to be like the flu, every year you get a booster.”

Throughout the city, there’s a sense that completely closing down is no longer an option. Hannibal Bracey, a 36-year-old who works at Trader Joe’s in Union Square, says he has no choice but to work.

“I’m living in one of the most expensive cities in the world,” he said. “I can’t just not work.”

Bracey said that since being vaccinated and receiving a booster, he feels that he has done as much as he can to stay safe. The coronavirus has become just another fact of life for him, he said.

“As a Black man, I can get killed doing anything. I could get murdered over a 20 dollar bill like George Floyd,” he said. “So there’s always something threatening my life, and covid has just become another one of those threats.”