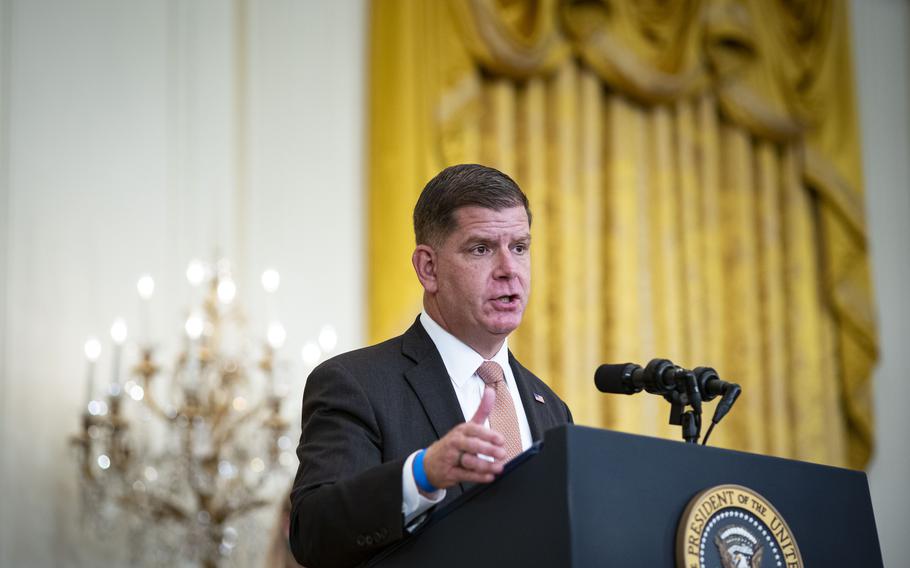 WASHINGTON - Few things have been as upended during the pandemic as the labor market.

Labor Secretary Marty Walsh, the Biden administration’s point person for dealing with the labor market disruption, has faced a mountain of crises that will continue to prove challenging in 2022. Joblessness is still well above what it was before the pandemic; worker shortages threaten several sectors from airlines to restaurants, and workplaces have been mired in lingering safety issues that many have looked to the Department of Labor to resolve. There’s also the existential questions about labor policy like gig work and minimum wage, both of which the agency plays a big role in shaping.

Recently Walsh, a former Boston mayor who worked his way up through the building trade unions, has made a point of supporting striking workers, visiting picket lines with workers at companies like Kellogg’s and working behind the scenes to help end disputes elsewhere, amid a recent spate of strike activity.

During a recent interview with The Washington Post, Walsh listed that as one of the many things he was most proud of in nearly year in office so far, including visiting more than 60 cities to help tout the American Rescue plan and the infrastructure package, kick-starting the Department of Labor’s push to modernize the unemployment insurance system, and passing two emergency safety standards for workplaces to follow during the pandemic.

He also spoke about his work seeing through an employer vaccine mandate, one of the more contentious policies that the agency has undertaken in decades. Companies are required to find out the vaccination status of their employees by Jan. 10, and have unvaccinated employees wear masks. By Feb. 15, they are required to have unvaccinated workers test weekly, or they will face steep financial penalties.

Here are some highlights from the interview, which have been lightly edited and condensed.

Q: The vaccine and testing rule has been through the legal wringer, and its final fate is still uncertain, with the Supreme Court set to consider it, along with the federal vaccine requirement for certain health care workers, the first week of January. Do you think it could have been designed in a way to avoid these legal hurdles?

A: When covid-19 came to America, a lot of people were concerned about their health and wishing there was a vaccine at that particular moment. Unfortunately, it got caught up in politics. I don’t understand why people make political statements about stopping wearing masks, or not to get vaccinated. This is about keeping people healthy and safe. We’ve lost over 800,000 Americans to this virus, we’ve lost over 5 million people worldwide to this virus, and we need something not just to combat the virus, but to keep people healthy and alive.

Q: One question is how effectively OSHA [the Occupational Safety and Health Administration] will be able to enforce the mandate, which is estimated to apply to 84 million workers at thousands of businesses. The number of inspectors at the agency decreased under former president Trump and has languished in general for longer than that. Will OSHA be able to aggressively enforce the rule by the February deadline?

Q: The pandemic still taking a toll on the economy and the new variant may result in more layoffs at some point. Do you think the administration made a mistake by letting federal unemployment benefits expire this fall?

A: No. The president made it very clear it was part of his reopening plan. He laid out a plan to get 100 million vaccines into people’s arms in the first hundred days, and he extended unemployment benefits so that we could move forward. Now he was able to shatter [that], with 200 million shots in the first 100 days. And that’s why I think the ETS [vaccine rule] is so important for us to continue to make gains. We’ve seen about 6 million people come back to work since the president has taken office. As mentioned earlier, the unemployment rate is 4.2%, lower than was anticipated for a couple of years. It was very clear from the beginning, we’re going to be living with some variation of the coronavirus for a while.

Q: We know that the unemployment insurance (UI) programs were swamped during the earliest days of the pandemic, as they struggled with the volume of claims. What is the Department of Labor doing to fix the issue?

A: For the last 10 years, we’ve known that there was a desperate need for a UI modernization. The president put in his budget, not just $2 million, but a set of principles that we should use as the basis of any reform to the system. The principles we’ve talked about are ensuring adequate benefit levels and duration for unemployed workers, and ensuring that the UI system can ramp up quickly and automatically in response to a recession. What did we learn this time? The president made sure that as he extended the benefits, it stayed for the misclassified independent contractor workers as well, and low-income workers, part-time workers. We’re also ensuring the long-term solvency of the trust funds, investing and expanding and re-employment services, and improving the UI program access and integrity, and also working on technology joint grants around the country. One thing that I’m really encouraged by is that we have both Republican and Democratic governors of states involved in this conversation because they all felt the same type of pain.

Q: The passage of the Build Back Better bill is in serious jeopardy, even though it was supposed to be done by the end of the year. Who do you fault for its shaky prospects at the moment?

A: I think we’re still moving forward here. I’m going to continue to remain optimistic about this. There are lots of good pieces in this bill that will make a difference in millions of Americans lives. The child tax credit being one, child care being another, adult care, elder care being another, job training, all of that. When I travel around the country, I talk about the bipartisan infrastructure bill and I talk about Build Back Better. And I’ll tell you most rooms that I’m in, it’s Build Back Better that people are talking about.

Q: Many companies where workers have been working remotely have pushed back their returns to the office. Do you have an idea of when these workplaces will be able to return to the old rhythms that they were used to?

A: Unfortunately, the omicron variant set a lot of people in this country back. What’s really important for us is to continue to follow the science. The past administration clearly didn’t follow the science. Fast forward to President Biden’s been in office a year. Some people are back to work. Some industries are back, but we need to make sure those industries stay and that they won’t be shut down again. I think it’s important that we continue to follow the recommendations by the CDC and the medical experts. It’s not necessarily like Marty Walsh comes up with an idea. Everything I do is based off what the CDC or the covid task force is recommending to us.

A: Certainly, we’ve pushed and the president pushed for a [higher] federal minimum wage. I think that that’s going to continue to stay. There’s lots of issues that the president looks at as very important for the future of our country - minimum wage being one of them, the Pro Act being another one, voter’s rights being another.

Q: Let’s talk about labor activism. There have been a lot of high-profile strikes recently. Do you think you or do you think the White House could take a bigger role in encouraging that momentum?

A: I don’t know if it’s a strike wave or just greater acknowledgment of what’s happening in the country. There’s a bigger spotlight on a lot of these worker disputes that are happening right now. I don’t think it’s my place as secretary of labor to interject per se, unless asked or if we see a path forward. When I think of the strike at St. Vincent’s [hospital], you’re talking about a nine-month strike where there were lots of hard feelings on both sides. And what that was needed was for the rhetoric to be toned down a little bit. And we were able to resolve it.