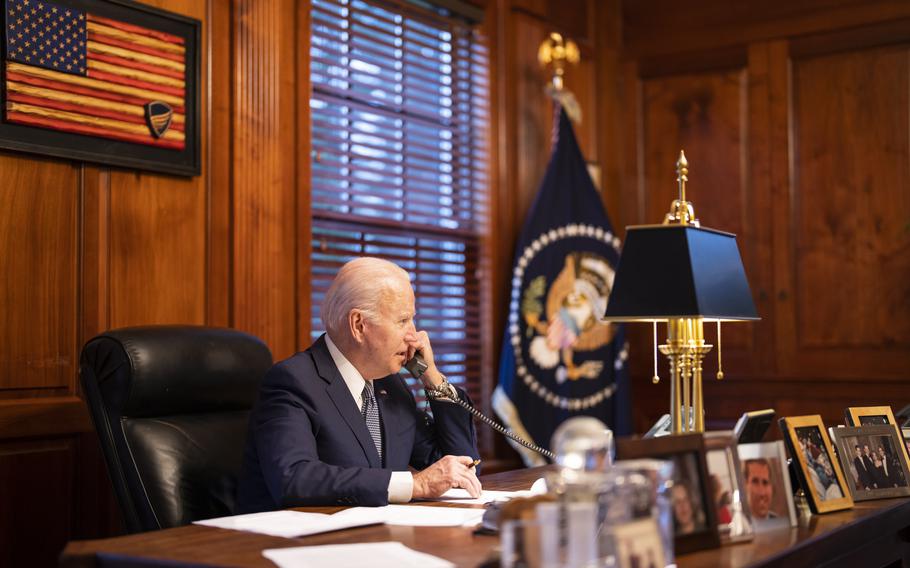 In this image provided by The White House, President Joe Biden speaks with Russian President Vladimir Putin on the phone from his private residence in Wilmington, Del., Thursday, Dec. 30, 2021. (Adam Schultz/AP)

Biden will “reaffirm U.S. support for Ukraine’s sovereignty and territorial integrity,” according to a White House official, previewing the call to reporters on the condition of anonymity under ground rules set by the White House. Biden, who is in Wilmington, Del., for New Year’s Eve, is also expected to review preparations with Zelensky for the upcoming diplomatic talks.

Senior U.S. and Russian officials will meet in Geneva on Jan. 9 and 10, before a meeting of the Russia-NATO Council on Jan. 12 and negotiations at the Organization for Security and Co-operation in Europe in Vienna on Jan. 13.

The call with Zelensky will come three days after Biden spoke with the Russian president for nearly an hour at Putin’s request, with the leaders discussing potential repercussions as a result of Russia’s troop buildup.

Biden told Putin that Russia would face unprecedented sanctions if Moscow takes further military action at the border with Ukraine, where Russians have amassed tens of thousands of troops and fired a test salvo of hypersonic weapons, a senior administration official told reporters after the call.

In 2014, Russia invaded Ukraine and annexed the Crimean Peninsula.

Putin warned that any new sanctions could lead to “a complete rupture of relations” between the nations, according to Russian presidential foreign policy aide Yuri Ushakov. Putin has reiterated the Kremlin’s proposal that would bar Ukraine from ever joining NATO and rule out any other eastward expansion by the U.S.-led military alliance, which the White House has rejected.

In a tweet on Friday, Secretary of State Antony Blinken signaled that the United States and its allies will not be deterred.

“Had a productive conversation with Canadian Foreign Minister @MelanieJoly on our shared efforts to counter Russian aggression against Ukraine. We will work together to impose massive consequences and severe costs for further aggression,” Blinken wrote.