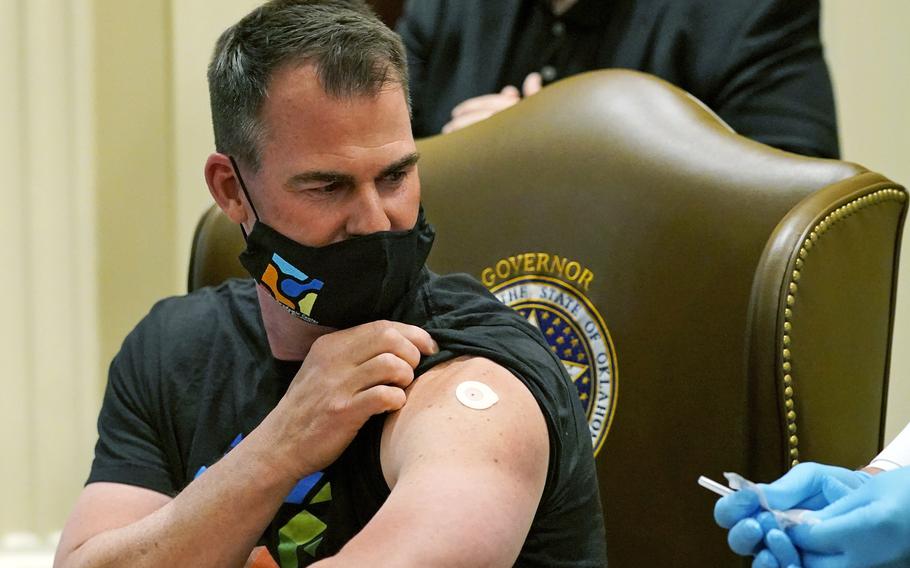 A federal court on Tuesday denied a lawsuit filed by Oklahoma Republican Gov. Kevin Stitt that challenged the Pentagon’s military-wide coronavirus vaccination mandate by asking that the requirement be suspended for his state’s National Guard members. (Sue Ogrocki/AP)

A federal court on Tuesday denied a lawsuit filed by Oklahoma Republican Gov. Kevin Stitt that challenged the Pentagon’s military-wide coronavirus vaccination mandate by asking that the requirement be suspended for his state’s National Guard members.

Judge Stephen P. Friot sided with Defense Secretary Lloyd Austin, who has said the mandate is needed to maintain a healthy force that is ready to act quickly. Friot also disagreed with Stitt’s assertion that the Pentagon was overstepping its constitutional authority, noting that Guard members are already required to receive nine immunizations.

“Adding a tenth ... vaccine to the list of nine that all service members are already required to take would hardly amount to ‘an enormous and transformative expansion [of the] regulatory authority’ the Secretary of Defense already possesses,” he wrote in his ruling.

The ruling boosts the legal standing of the military vaccine mandate as the Biden administration struggles to increase vaccination rates among Americans.

Tuesday’s decision comes a few weeks after the Republican governors of Alaska, Iowa, Mississippi, Nebraska and Wyoming urged the Pentagon to reconsider vaccination requirements for their National Guard contingents in a joint letter.

They argued - just as Stitt has done - that the National Guard is under the authority of each state’s governor unless activated by the president. This means, they said, that coronavirus vaccination requirements cannot be imposed by the defense secretary on their states’ National Guard members so long as the troops are not mobilized by the federal government.

Friot’s ruling Tuesday served as a de facto disagreement with that argument. It also rejected Stitt’s legal motion to suspend the Pentagon mandate in Oklahoma until the court could complete a fuller review of the military mandate.

“It is unmistakably clear that the intent of Congress ... is that the Guard and its members will at all events be prepared, conformably to federal military standards, to be ordered into federal service ... on little or no notice,” said Friot, who was nominated to his post by President George W. Bush in 2001.

The Biden administration is “acting well within the authority granted by the Constitution and laws of the United States,” Friot added.

In an appeal to the administration, Friot urged leaders to implement a grace period for Oklahoma Guard members who have so far refused the vaccine after their chain of command said they would not punish them for doing so. Those troops “did not have the benefit of well-informed leadership at the highest level of the Oklahoma Guard,” Friot said.

Brig. Gen. Thomas Mancino, commander of the Oklahoma National Guard, clarified the stakes and consequences for vaccination refusal this month.”Anyone exercising their personal responsibility and deciding not to take the vaccine must realize that the potential for career-ending federal action - barring a favorable court ruling, legislative intervention or a change in policy - is present,” Mancino said in a message to the force.

Many states - sometimes successfully - have sought to convince courts to halt the Biden administration’s vaccination mandates. These have aimed to compel federal contractors, federal agencies, private businesses with 100 or more workers, and health-care facilities covered by Medicaid and Medicare to vaccinate their employees, minus those who have qualified for medical or religious exemptions.

Those states’ leaders, many of them Republicans, have said that the mandates infringe upon citizens’ rights to make their own medical decisions.

Stitt argued that the same logic applied to his state’s National Guard members. In a Nov. 2 letter to Austin, Stitt wrote that the “mandate violates the personal freedoms of many Oklahomans.” The defense secretary replied later that month: “The concerns raised in your letter do not negate the need for this important military readiness requirement.”

“All members of the Oklahoma Army and Air National Guard, regardless of duty status, must follow ... COVID-19 vaccine compliance ... requirements,” Austin wrote Nov. 29. The mandate is needed to fight the coronavirus, which “jeopardizes our ability to meet mission requirements,” he said.

Troops who do not meet the vaccination requirement and do not qualify for an exemption are subject to penalties that may include forfeiture of pay or forcible separation from the military.

The U.S. military has received thousands of religious exemption requests but has yet to approve any. Air Force members who have their exemptions denied, including those in the Air Guard, must start a vaccination regimen within five days of the rejection, file an appeal or request separation from the service. Continued refusal will lead to dismissal, the Air Force said.