(Tribune News Service) — A Camp Pendleton Marine was arrested on suspicion of smuggling undocumented immigrants in the San Diego backcountry on Christmas Day, according to a federal complaint filed Monday.

Angel Morales Gaitan, a Marine assigned to Camp Pendleton, was arrested just after 1 p.m. Saturday in Campo. A Border Patrol agent in an unmarked car said the Kia Optima was driving "suspiciously" and its driver appeared to not know where he was going, the complaint states.

The agent called for a marked car to make a traffic stop, and two people were found in the car's backseat apparently trying to hide, the complaint states. Morales was arrested on suspicion of transportation of undocumented immigrants.

Morales told law enforcement he was hired after responding to an advertisement on Instagram for drivers offering $1,000 per trip, the complaint says. He told agents he was to drive the couple to Los Angeles.

The two migrants, both Mexican nationals, told authorities that they climbed the border fence using a rope and were directed to a pick-up location north of the border, according to the complaint. The migrants were being held as material witnesses in Morales' criminal prosecution.

Instagram did not immediately respond to questions about the purported advertisement.

This is not the first time Camp Pendleton Marines have found themselves embroiled in alleged human-smuggling activities.

The 2019 arrest of two Marines near Jacumba Hot Springs with undocumented immigrants in their vehicle kicked-off a wide-ranging investigation into smuggling and drug offenses in the 1st Marine Division. Three weeks after the arrests military law enforcement agents arrested 16 more Marines on Camp Pendleton within the entire 800-person 1st Battalion, 5th Marine Regiment watching on in formation.

The stunt, captured on video by the division's communication strategy office, was later ruled illegal by a Marine Corps judge. Military prosecutors went on to drop charges against many of those arrested and their cases were dealt with administratively. At least 13 were separated from the Marines. Six pleaded guilty to smuggling or drug charges at court-martial, the Marines said at the time. 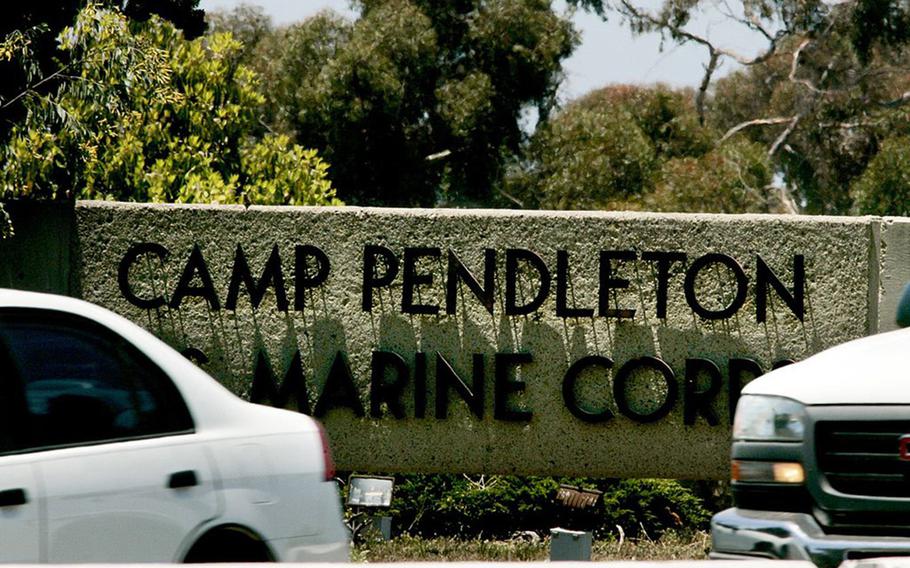 The main gate at the Camp Pendleton Marine Corps base on June 16, 2006, in Oceanside, Calif. ( Sandy Huffaker, The Los Angeles Times/TNS )
Crime and courts