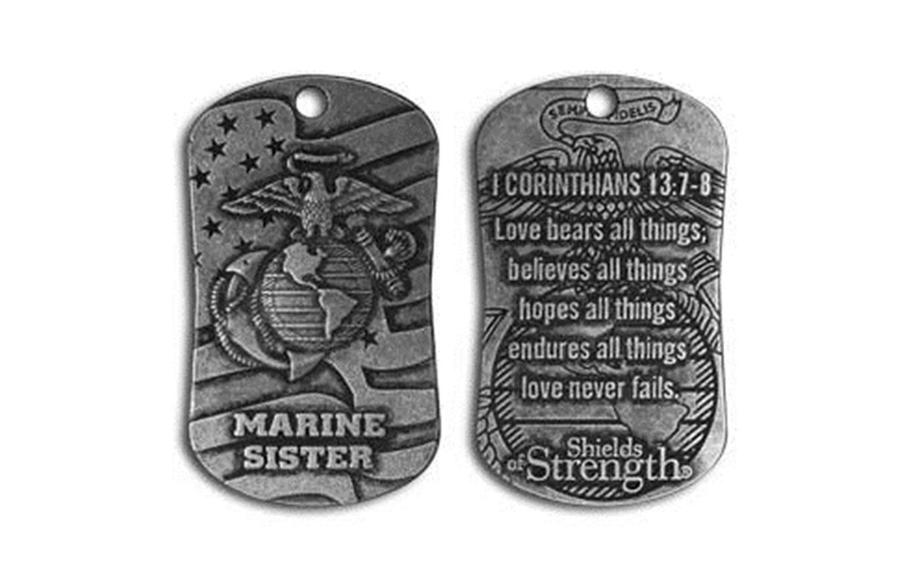 A Shields of Strength dog tag featuring the U.S. Marine Corps logo on one side and a Bible verse on the other side. A years-long dispute over the use of licensed military logos on religious-themed replica dog tags has resulted in a federal lawsuit against the Defense Department.  (Image from lawsuit)

A years-long dispute over the use of licensed military logos on religious-themed replica dog tags has resulted in a federal lawsuit against the Defense Department. The decision to deny the use of licensed logos alongside Christian Bible verses is religious discrimination, according to the lawsuit.

Shields of Strength, a Christian jewelry company based in Beaumont, Texas, filed the lawsuit Dec. 15 in U.S. District Court for the Eastern District of Texas in Tyler. Named defendants include the Defense Department and Defense Secretary Lloyd Austin, as well as the trademark offices and related leadership for the service branches.

The products in question are replica dog tags that feature faith-based, inspirational phrases or Christian Bible verses on one side and the logo of a military service branch on the other side. Shields of Strength owner Kenny Vaughan began making the tags in 1998 and received a trademark license in 2011 from the Army, Air Force and Marine Corps, which is when the military began requiring them, according to the lawsuit. At that time the Navy did not grant the license because of the religious nature of the products.

The company lost its agreements in 2019 after a group that advocates for the separation of religion from the military, the Military Religious Freedom Foundation, submitted complaints to Defense Department trademark offices, according to the lawsuit.

In the years since, the company has been trying to navigate a new agreement, but ultimately felt it had to file a lawsuit, said Mike Berry, general counsel for First Liberty Institute and attorney for Shields of Strength. The Plano, Texas-based, nonprofit law firm focuses on cases regarding religious freedom.

The Defense Department denial of a trademark license is “purely because of the religious content,” Berry said.

“It’s a cruel insult to our service members to deny them a source of inspiration, hope and encouragement simply because it contains a religious message,” Berry said. “DOD officials caved to the empty threats of those who make their living by being offended. There’s no legal reason for the military to discriminate against Shields of Strength.” 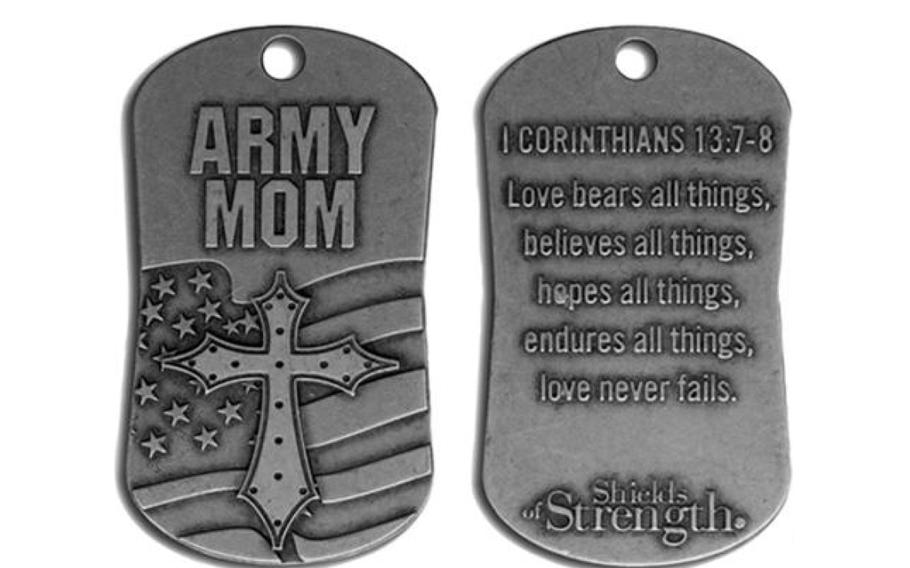 A Shields of Strength dog tag featuring “Army Mom” on one side and a Bible verse on the other side. A years-long dispute over the use of licensed military logos on religious-themed replica dog tags has resulted in a federal lawsuit against the Defense Department.  (Image from lawsuit)

The lawsuit asks for the court to recognize the violation of constitutional rights under the first amendment, and for the Defense Department to allow the company to return to their previous agreement to use the licensed logos on its products. The lawsuit also calls for a financial reward related to damages, attorneys’ fees and expenses.

When contacted about the lawsuit, an official with the Defense Department said the department does not comment on ongoing litigation.

The replica dog tags became popular among Christian service members deployed during the wars following Sept. 11, 2001, and were even sold for several years in Army and Air Force Exchange stores.

The first soldier killed during the war in Iraq, Capt. Russell Rippetoe, wore a Shield of Strength which has since been placed in the Smithsonian Museum of American History along with his uniform, according to the lawsuit.

The company estimates that before 2011, it sold or donated about 3 million different dog tags that featured military-related words or insignia. It is often contacted by service members or chaplains to make customized products with specific unit logos to mark special occasions such as deployments or graduations, Berry said.

“At one point, [Shields of Strength] was sending 500 to 1,000 dog tags per month to the Pentagon Chaplain’s office for Pentagon leadership and military guests,” according to the lawsuit.

Mikey Weinstein, a former Air Force JAG officer and current founder and president of the Military Religious Freedom Foundation, has said that to put military logos onto religious-themed products is a violation of the licensing agreement. He said he initially sent a letter to the Defense Department about Shields of Strength because his organization received numerous complaints, including from many people who identified themselves as Christian.

“It's denying our service members and their loved ones something that they're requesting. They're asking for these,” Berry said. “It's this weird conundrum where the military is asking, ‘Hey, will you provide this to us?’ And then a different office of the military is telling [Shields of Strength], ‘No, you can't do that.’”