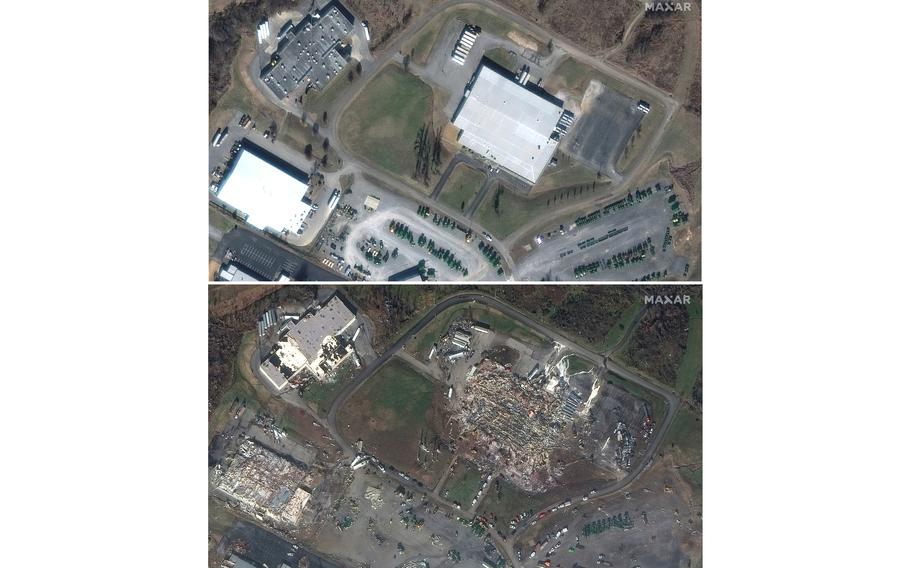 This combination of satellite images provided by Maxar Technologies shows Mayfield Consumer Products candle factory and nearby buildings, in Mayfield, Ky., on Jan. 28, 2017, top, and below on Saturday, Dec. 11, 2021, after a tornado caused heavy damage in the area. Survivors of a tornado that leveled a Kentucky candle factory, killing eight workers, have filed a lawsuit claiming their employer demonstrated “flagrant indifference” by refusing to allow the employees to go home early. (Satellite image ©2021 Maxar Technologies via AP) ()

LEXINGTON, Ky. (Tribune News Service) — Kentucky Gov. Andy Beshear has confirmed the death of an infant from tornadoes that ripped through the state late Dec. 10 and into the early hours of Dec. 11.

That confirmation raises the state’s death toll from the severe weather to 77.

Until this month’s tornadoes, the deadliest tornadoes in Kentucky were in 1890 in Jefferson County when 76 people were killed.

In the Monday announcement, Beshear did not provide the name of the infant. He said the death occurred in the middle of last week.

“This is one that rips at the very fabric of who we are,” Beshear said.

In an update on the tornadoes’ aftermath, Beshear said 16 Kentucky counties now are eligible for assistance from the Federal Emergency Management Agency with the addition of Marion County.

So far, more than 11,400 Kentuckians have applied for federal disaster aid and about 11,600 have applied insurance claims., he said.

FEMA already has distributed about $4.7 million.

Beshear said debris removal is ramping up and that Kentucky resort parks are housing 606 displaced persons and 154 first responders.

Information about disaster assistance can be found at DisasterAssistance.gov or by calling 800-621-3362.

The Beshear Administration has launched a website with various information about available resources. It is at governor.ky.gov/TornadoResources.

The special fund Beshear set up for tornado victims — TeamWKYReliefFund.ky.gov — has raised nearly $30 million in donations, he said. Thirty-nine families have received checks from the fund for funeral expenses.

The next part of the fund will be used for uninsured homeowners, he said.

Kentucky first lady Britiany Beshear said a toy drive she spearheaded for Christmas toys for children impacted by the tornadoes raised hundreds of thousands of toys and gift cards and enough was available that toys will be distributed to children on their birthdays and other special occasions.