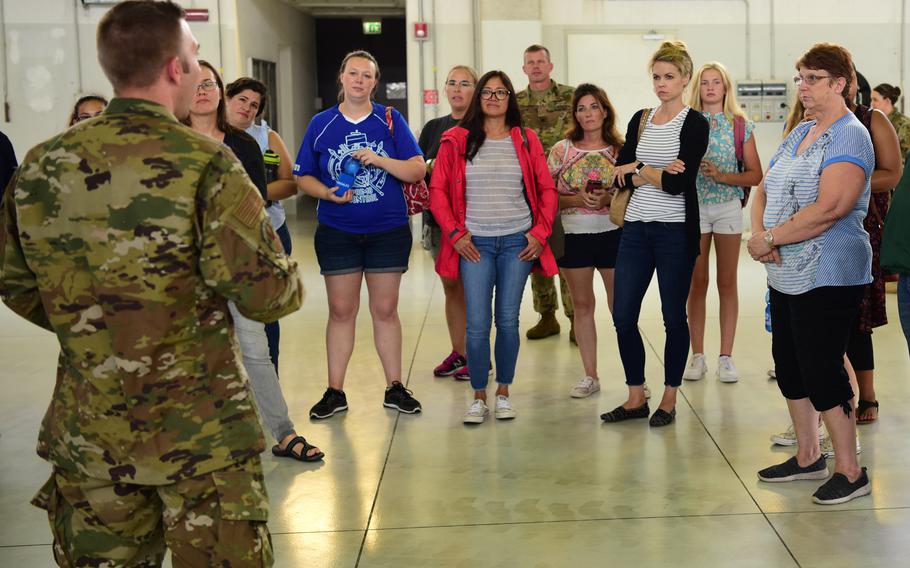 Spouses and family members listen to a brief during a spouse day on August 2, 2019, at Aviano Air Base, Italy. Military spouses in Italy have encountered limited employment opportunities when accompanying their service member to Italy. (Heidi Goodsell/U.S. Air Force)

The Defense Department will begin an in-depth study into military spouse employment next year, which advocates say can help explain why the population’s unemployment rate has sat at about 22% for the past decade.

The study was included in the 2022 National Defense Authorization Act, which President Joe Biden signed into law on Monday, and will be the first comprehensive review of the subject in several years, said Sue Hoppin, founder and president of the National Military Spouse Network, an organization that supports spouses’ professional and personal development.

She has been a longtime advocate for research of this kind, because uncovering the root causes of unemployment can help build more effective programs, she said.

"We look forward to continuing our work with [Defense Department] to encourage military spouse participation in the study and ensure that the resulting policy recommendations reflect the needs of today's military families," Hoppin said.

The Pentagon must provide the study to Congress within one year, along with any policy change recommendations.

“We applaud the United States Congress for their hard work in championing this new study and taking this important step in supporting our military spouses,” said Kathy Roth-Douquet, CEO and board president of Blue Star Families, a military family advocacy nonprofit. “Our mission is not only to provide resources and support directly to military families, but to make sure their voices are heard and concrete actions are taken by decision makers.”

Members who advocated for including the study in the NDAA were Sens. Raphael Warnock, D-Ga., and Marsha Blackburn, R-Tenn., and Rep. Marilyn Strickland, D-Wash.

“As the daughter of a veteran, I know that when a person answers the call to serve, their entire family steps up with them in service and sacrifice,” Strickland said in a statement. “For military spouses, that sacrifice shouldn’t mean facing discrimination in the workforce and losing job opportunities as a result.”