‘Above and beyond the call’: Military families strive to create impact through fostering 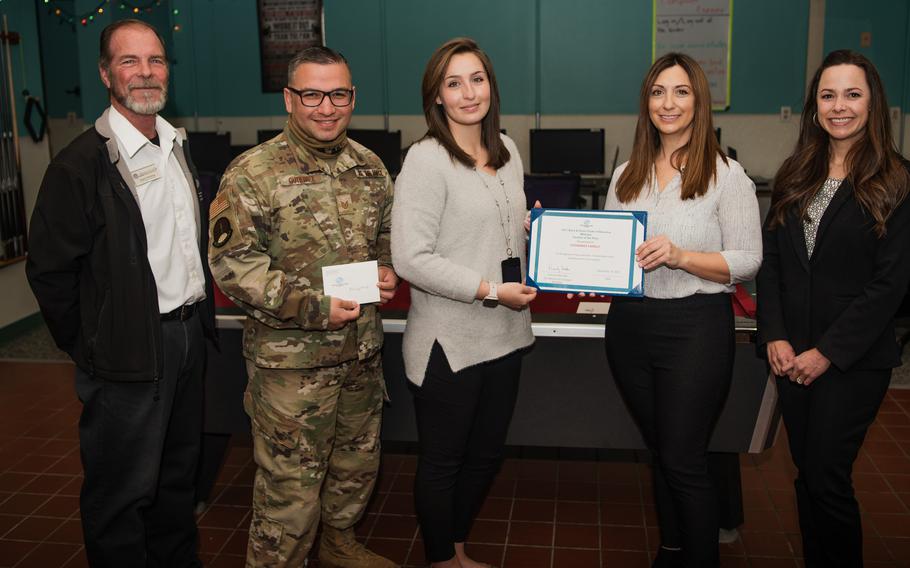 Tech. Sgt. Salvador Gutierrez and his wife Eden (second and third from left) received the Boys and Girls Clubs of America Military Family of the Year for the U.S. Air Force award on Dec. 13, 2021. (Lenny Juliano/U.S. Air Force)

(Tribune News Service) — Salvador and Eden Gutierrez’s first interview in the process to become foster parents in 2019 was conducted in their new, empty house.

Since their household goods and furniture were still on the way from overseas where Salvador, a technical sergeant with the United States Air Force, had been stationed, everyone sat on the floor in the living room, which made the interview more relaxing, Eden said.

The Gutierrezes always had a goal of fostering ever since they got married eight years ago, and after Salvador received orders to Vance Air Force Base, they immediately began looking into fostering in the Enid community.

After a long process following the initial interview, Salvador and Eden — a civilian employee at Vance — were approved, and in the years since, they have fostered seven teenagers and helped educate other military members about fostering and encouraged them to take the plunge.

“Military families can see that (fostering) is possible,” Eden said. “It’s not necessarily the easiest ... but it’s possible.”

Standing in the gap

Between Garfield, Grant and Kingfisher counties, approximately 200 to 250 children are in foster care at any given time throughout the year, said Tina Frazer, Region 1 district director for the Oklahoma Department of Human Services.

These children, ranging from newborns to 18-year-olds, may have been subjected to abuse and neglect and are separated from their parents and other family members — trauma that is important for foster families to understand, she said.

“Foster families ... have special hearts to parent children who have been through these horrible experiences and to be understanding of what their needs really are,” Frazer said.

There are about 50 traditional foster homes — excluding kinship homes — in Garfield and Grant counties, said Linda Briggs, DHS foster care and adoption recruiter. There are at least five military families Briggs knows of that foster.

Military families are considered traditional foster homes but are “extra special” because of their service to the U.S., Briggs said.

“Military families already have a heart for serving others, and that shows how amazing they already are, and even more to be willing to care for Oklahoma’s foster kids, as well,” she said. “Their duty to our country is astonishing in and of itself, and for those families to stand in the gap for our children is just above and beyond the call.”

Capt. Claire Maciejewski, an aerospace physiologist at Vance AFB, said being in the military helped her and her husband Dan, a master sergeant in the U.S. National Guard, prepare for their fostering journey, which began in the summer of 2020.

While answering a lot of the questions during the fostering process, Maciejewski said she thought to herself that she wished she could answer with “because I’m in the Air Force.”

Maciejewski said one of her long-term goals in fostering is to streamline the application process for military families, who might often have to relocate to other states.

“I hope there’s an opportunity for me, at some point down the road, to be an advocate and to possibly cross paths with somebody that has more know-how on how the foster policies work from state-to-state,” she said, “and that, maybe, we can work together to create something that makes this a little more achievable for military families so that we get more participation.”

The importance of support

The Gutierrezes fostering journey, which started shortly before the COVID-19 pandemic hit, has been a tag-team effort in making sure their biological kids and the foster teenagers were all taken care of.

The effort includes the support from both Salvador’s and Eden’s leadership.

Maj. Patricia Baker, the public health officer at Vance AFB, said Salvador already was well-established in fostering when she arrived in October 2020.

Baker said working with Salvador in his fostering journey has been easy because he lets her know when the family is taking in a new foster teenager.

That way, she said, Salvador can have more flexibility during the first few days when most of the legwork and processing takes place.

“Sgt. Gutierrez does the exact same thing for other people when they need adjustments to their schedule because of family stuff,” she said. “He gives 100% all day, every day, when he’s here at work, so it makes it really, really easy on me as a supervisor to be able to let him have the time he needs to get his family situated.”

Vance AFB’s entire public health team is all there for each other, too, Baker said, adding that although the mission is No. 1 priority, military members’ family lives are important, too.

“We all realize that we’re all human, and we all need to support each other when we can,” she said. “That’s the nice part about Vance — as long as the mission is getting done, we’re able to flex what we need to for family support.”

The Maciejewskis, who have a 3-year-old biological daughter, have fostered two toddler-aged children, both for just a matter of days, since they became foster parents.

Maciejewski said there have been challenges and demands in fostering, especially in the beginning when she felt like she didn’t have a support system.

With a handful of Vance AFB families who foster, Maciejewski said a “foster committee,” including the Gutierrezes, was created to provide support for each other and help educate and encourage others interested in fostering to take the plunge.

Vance AFB’s foster committee hosts educational events and classes on Vance AFB, inviting Briggs from GCDHS and representatives from other local foster care agencies in the area to give information to military members who may be interested in fostering .

From those classes, Salvador said at least two families have started fostering.

“A lot of people don’t think that they can do it, being military members with busy schedules and all that,” Salvador said. “That was the purpose of the class — to show that, ‘Hey, you can do it.’”

A local foster support group meets at 6 p.m. the fourth Tuesday of each month at Emmanuel Enid, as well, Briggs said. Meals and childcare are provided, along with training hours for those who attend.

Like the Gutierrezes, fostering always had been a goal of the Maciejewskis, but because of their military duties and obligations, they never felt like it was the right time, having moved five times in the last four years, until they finally felt settled in Enid.

“In life, in general, if you just always wait around for the right time, you won’t ever do anything,” Maciejewski said. “When you do things that are hard, it’s almost always going to be an uphill battle, and that’s why you’ve just got to start. ... Looking back, I wish that we had started a little bit earlier.”

Maciejewski said she and Dan would love to have the opportunity to adopt a child one day, but they have realized since they became foster parents that the purpose of foster care is the “harder, more selfless goal” of reunification.

She said in the future she hopes that she and Dan have been a stepping stone for a child’s biological parents to get their lives into the position they needs to be in to take care of their children, though she said every child who comes into their home will be treated as their own.

“The family that my husband and I are trying to create is a home where there’s just an open-door policy,” she said. “It doesn’t matter where you came from, and it doesn’t really matter where you’re going — you’re welcome in our home, and you’re going to be family while you’re here, however long that is.”

Fostering, Eden and Salvador said, has been a learning process. The teenagers they have taken in have stayed with them for as little as three days to as long as nine months.

“(Fostering) is not all sunshine and rainbows, but it is more rewarding than anything because you’re seeing the effort you put into these children — you see the difference,” Eden said. “You can learn and grow with them, and it’s all worth it in the end.”

“Even if it’s for three days, it can make a difference,” Salvador added. “That’s the driving force.”

McKendrick is police and court reporter for the Enid News & Eagle.