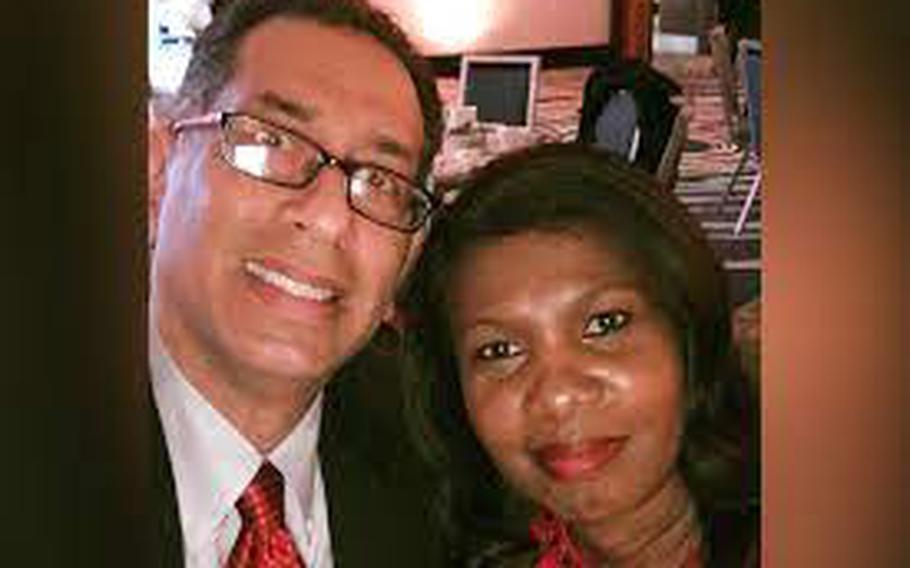 Edward McDaniel Jr., 55, an Army doctor, and Brenda McDaniel, 63, a retired Army colonel and nurse, were shot and killed Wednesday in the front yard of their home in Springfield, Va., according to police. (Facebook)

Edward McDaniel Jr., an Army colonel and doctor who treated generals, and his wife, Brenda, a retired Army colonel and a nurse who had served in the White House, had just returned home from walking their dogs on a spring day when a man approached them in their driveway.

The man pulled out a handgun and shot each in the head, leaving the couple to die in front of their upscale Springfield, Va., home in May, according to a witness. The reason behind the high-profile slaying in broad daylight had largely remained a mystery for six months.

But at a preliminary hearing in Fairfax County General District Court in early December, an acquaintance of the alleged gunman, Ronnie Marshall, testified the pair had gone to the McDaniels' home not to target the accomplished couple, but to confront their son.

D'Angelo Strand told a judge Marshall was seeking Mike McDaniel because the son was part of a group that allegedly jumped and robbed Marshall, an accusation Mike McDaniel denies. Strand, Marshall and Mike McDaniel all worked together at a FedEx warehouse in Lorton, Va.

A judge found probable cause to forward Marshall's case to a grand jury following the hearing on Dec. 6. Marshall, 20, is facing two counts of second-degree murder and firearms violations.

Michael C. Sprano, Marshall's attorney, declined to comment on the case but pointed out in court that Strand's account of the shooting had shifted over time in interviews with detectives.

Strand, 19, was facing the same charges as Marshall, but after he testified against his co-defendant, Fairfax County prosecutors amended Strand's charges to a single count of accessory after a homicide. He is expected to plead guilty to the charge in January. His attorney declined to comment.

The events that led to the killing began two days earlier on May 24.

The former attorney for Marshall wrote in the filing that prosecutors maintain his client was at the McDaniels' home on that date.

The filing claims that prosecutors assert Mike McDaniel and two other people jumped Marshall, took money from him and had the police called on him. Fairfax County police had previously said they were called to the McDaniels' home on May 24 for the report of a burglary.

Brian Drummond, an attorney for the McDaniel family, wrote in an email that Mike McDaniel denies assaulting and robbing Marshall and noted he has not been charged with any crime. Drummond declined to comment on other aspects of the case and said the family may issue a statement after the legal proceedings conclude.

The day after the alleged assault, word began to spread at the FedEx warehouse where Marshall, Strand and Mike McDaniel worked about what had happened, according to the filing of Marshall's former attorney. The filing claims prosecutors believe those discussions left Marshall angry and embarrassed.

On the morning of the killing, Mike McDaniel was on a FaceTime call with one of the people who allegedly helped jump Marshall when he told the person that Marshall was outside with a gun and he needed to call police, according to the filing by Marshall's former attorney.

Soon after, the confrontation between Marshall and the McDaniels began. Marshall asked the couple where their son was and whether he would get his property back, Strand testified. The couple appeared to recognize Marshall and called him by his first name. Strand told a judge Marshall pulled out a gun and shot and killed both. The shooting occurred about 9:20 a.m., police said.

As Marshall and the acquaintance sped from the scene, Marshall said he had to open fire because "they knew his name," Strand testified.

A witness was able to see the license plate of the car Strand and Marshall fled in, according to a search warrant. The vehicle was registered to Strand.

A Fairfax County police officer found the McDaniels minutes after they were shot, lying on the driveway and in a drainage ditch in front of their large brick home. Both had been shot in the head and showed no signs of life.

Authorities began a manhunt for the McDaniels' killers.

The next day, Strand arrived at work and told management he wanted to turn himself in, according to a search warrant. Marshall was arrested later in the day after U.S. Marshals spotted him in Fairfax County.

Felice McDaniel, Edward's mother, had said previously her son had served two stints overseas in Iraq and was scheduled to retire from the Army in the months after he was killed, but he was still planning to work as a doctor.

She said he wanted to be a doctor after a watching a friend from high school suffer with mental illness.

Lennie Enzel, a retired colonel with the Army Nurse Corps and Brenda McDaniel's superior when she was assigned to William Beaumont Army Medical Center in El Paso, wrote in a Facebook message to The Washington Post that Brenda was an impressive colleague. Brenda McDaniel was selected to the prestigious post of White House nurse during the Clinton administration.

"She was one of the brightest, kindest, most professional Army Nurses with whom I ever had the honor to serve as evidenced by her tour as a White House Nurse," Enzel wrote.

Fairfax County Police Chief Kevin Davis struggled to make sense of the killings at a news conference soon after the shootings.

"We've lost two brave, dedicated, lifelong servants to our community ... and for what?" Davis said. "That's what's got us shaking our heads."