Federal employees to receive raises of up to 3.2% in January 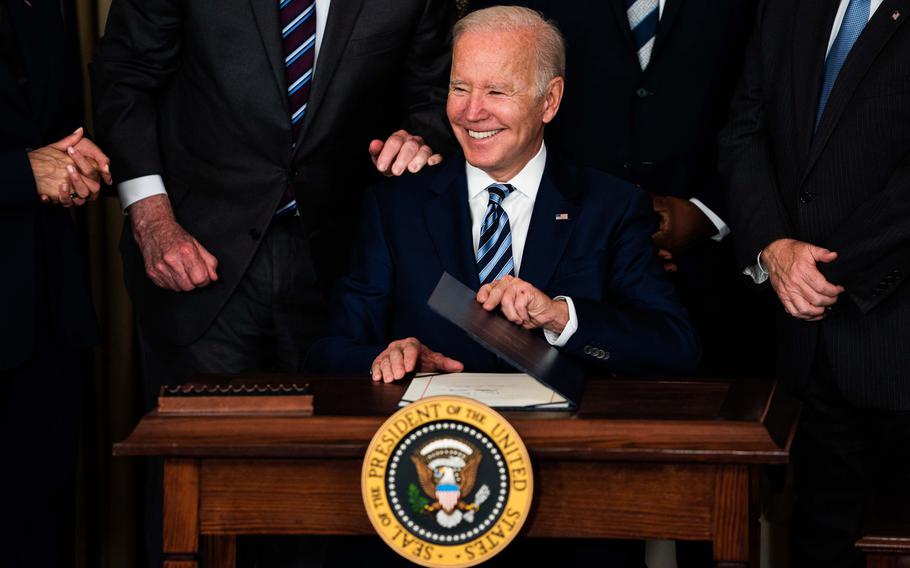 Federal employees working in the Washington-Baltimore “locality” — which sprawls over most of Maryland and Northern Virginia and reaches into eastern West Virginia and south-central Pennsylvania — will receive a 3.02% increase effective with the start of their first pay period of 2022, which in most cases will be Jan. 2. (Demetrius Freeman/Washington Post)

Most federal employees in the Washington, D.C., area will receive a pay raise of just above 3% in January under an order President Joe Biden issued Thursday, which sets 2022 raises for executive branch workers that vary by geographic area.

Federal employees working in the Washington-Baltimore “locality” — which sprawls over most of Maryland and Northern Virginia and reaches into eastern West Virginia and south-central Pennsylvania — will receive a 3.02% increase effective with the start of their first pay period of 2022, which in most cases will be Jan. 2.

That is among the larger of the raises to be paid under the General Schedule pay system, which applies to most white-collar federal workers below senior levels. The largest raise, 3.21%, will be paid in the Seattle area, and the smallest, 2.42%, is in a catchall category called the “rest of the U.S.” for locations outside more than 50 city zones with their own rates.

The raises are set by comparisons of labor costs, not living costs, and are separate from the cost-of-living adjustments to be paid to federal retirees in January of either 5.9 or 4.9%, depending on which of the federal retirement systems applied to them.

Biden acted under a provision of federal pay law stating that if no raise figure is enacted by Congress by the end of a calendar year, the president may order a raise by default. Biden had announced in August that if Congress did not act, he would order the 2.7% increase he had recommended previously.

Congress this year did not enact any of the spending bills that could specify a raise, with both the House and Senate in effect consenting to the default raise.

The raise does not apply to certain categories of employees, however. In some localities, including the Washington-Baltimore area, employees at or near the top of the General Schedule pay range have their salaries capped — a limit that will rise by $3,800 to $176,300.

Senior federal executives and certain others at high salary rates are paid within a range, with annual raises set by performance ratings. The maximum for them is rising by $4,400 to $203,700. Pay rates for political appointees will remain frozen.

Blue-collar federal employees are paid under a separate locality-based system using a complex formula that generally ties their raises to the amounts paid to white-collar employees in their area.

National Treasury Employees Union President Tony Reardon said in a statement that the raise is “a welcome change that will help federal employees in every city and state pay their bills, plan for their children’s education and save for retirement.”