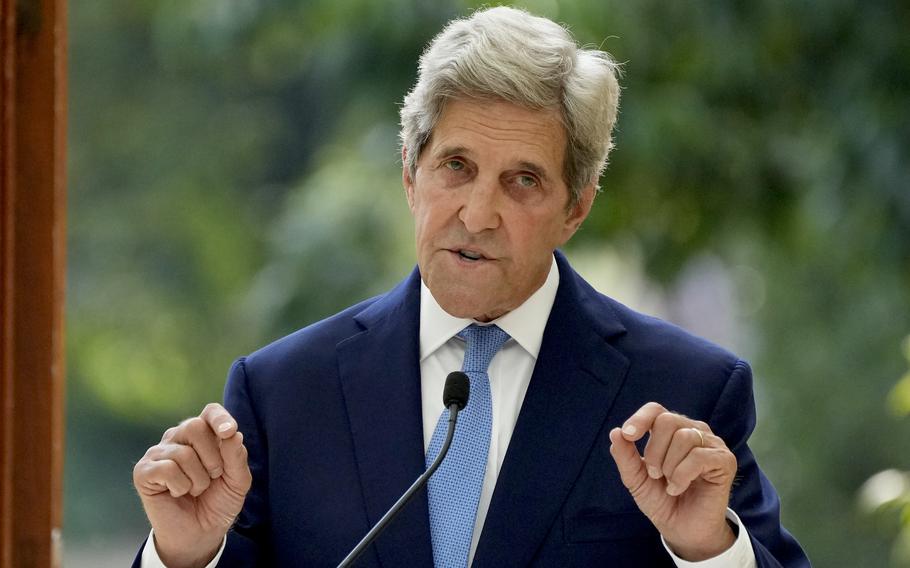 U.S. Special Presidential Envoy for Climate John Kerry delivers a policy speech in the Nash Conservatory at the Royal Botanic Gardens, Kew, in west, London, on a hot sunny day, Tuesday, July 20, 2021. The 19th century glasshouse was originally built in the grounds of Buckingham Palace and moved brick-by-brick to Kew in 1836. Temperatures in London hit 86 degrees Fahrenheit (30 Celsius) on Tuesday. (Matt Dunham/AP)

The world will probably have one of the warmest years on record in 2022, underscoring concerns about the need to tackle climate change.

The average global temperature is anticipated to be about 1.09 degrees Celsius (1.96 degrees Fahrenheit) above pre-industrial levels, the U.K’s Met Office said on Tuesday. While temperatures are expected to be slightly lower than in some years since 2015, it’ll mark the eighth consecutive year where they exceed 1 degree above the pre-industrial period.

Climate scientists have said that global temperatures will only keep rising without drastic cuts in greenhouse gas emissions, causing weather phenomenons like heatwaves to become more frequent and threatening to cause more deaths and hurt food production. Global crop yields could fall about 30% because of climate change, while food demand is expected to jump 50% in the coming decades, the United Nations has said.

That series of average temperature rises since 2015 “masks the considerable temperature variation across the world,” Doug Smith, a Met Office expert in climate prediction, said in a statement. “Some locations such as the Arctic have warmed by several degrees since pre-industrial times.”

The UN’s recent climate talks in Glasgow tried to keep the prospect alive of limiting the rise in global temperatures to 1.5 degrees Celsius above the pre-industrial period. The talks managed to reach some agreements on methane and carbon trading, but hopes for a clear statement to phase out coal were dashed with watered-down pledges.

The Met Office said temperatures next year would be slightly suppressed due to the influence of a La Nina weather pattern in the Pacific. A cooler winter in the region may increase appetite for liquefied natural gas in Asia, the world’s biggest buyer of the fuel.