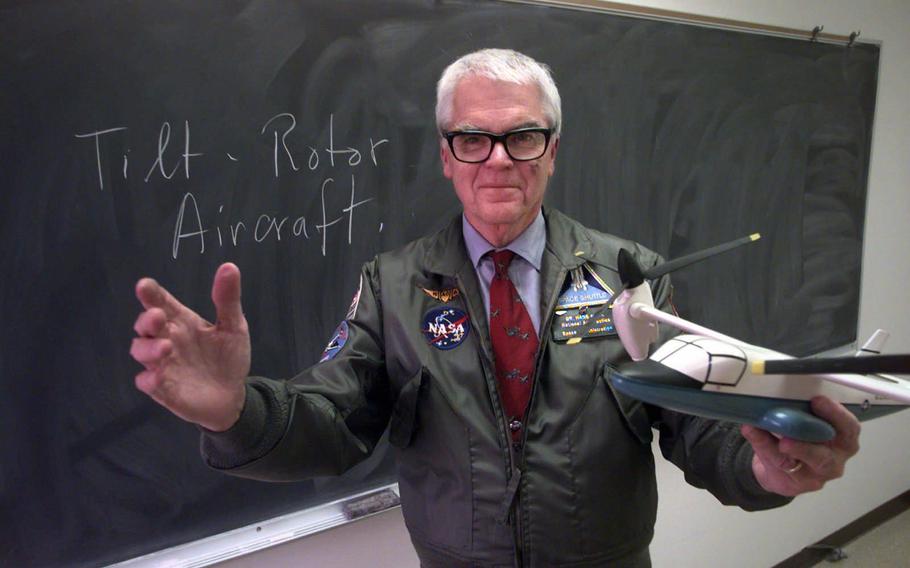 Hans Mark in 1998 with a model of the tiltrotor aircraft that he helped develop. Mark, a University of Texas aerospace engineer and former deputy director of NASA, also served as secretary of the Air Force and UT System chancellor. (Austin American-Statesman/TNS)

AUSTIN, Texas (Tribune News Service) — Aerospace engineer Hans Mark, a former secretary of the Air Force and University of Texas System chancellor who escaped the Nazis as a boy and then grew up to help put a man on the moon, died Saturday morning.

Mark was 92. He died at Westminster senior home in Austin and had suffered from progressive dementia.

A native of Germany who spent his childhood in Austria, Mark served as a longtime aerospace engineering professor at UT, as well as secretary of the Air Force and deputy administrator of NASA. He worked in Mission Control during the first moon landing and convinced President Ronald Reagan to establish the Space Station program.

Mark also helped turn UT and the entire city of Austin into research powerhouses. He left no question as to the critical importance of exploratory research.

"Because it's in our DNA," Mark told reporter Monica Kortsha for an article republished in Alcalde magazine in 2014. "To explore is an essential part of life, and a great nation has the obligation to explore."

Research, scholarship and teaching sustained his family for generations.

"Hans was a descendant of a long line of scholarly people through his father, Herman Mark," said his wife of 70 years, Marion Thorpe "Bun" Mark, referring to the chemist father who received the National Medal of Science from President Jimmy Carter. "Hans is remembered for his warm support of his students. He was honored for his serious work ethic, modesty, incorruptible character and respect for others. He earned a lot of honors I didn't even know about."

His UT students realized how lucky they were to study with him.

"Dr. Mark is the god of aerospace engineering," wrote one anonymous student in a review on the website Rate My Professors. "Be prepared to worship one of the finest aerospace-engineers-turned-bureaucrats in aerospace history. This guy has had his hands in loads of important projects, met some of the most important people in history — knew Carl Sagan personally — and his stories are to die for. Be prepared to love this class."

Born in Mannheim, Germany, on June 17, 1929, Mark escaped from Austria in 1940 with his family before the Nazis had hardened the border.

In his 2019 book, "An Anxious Peace: A Cold War Memoir" (published by Texas A&M University Press), Mark described a gripping journey through Switzerland, Italy, France, the U.K., Canada and the U.S. His father had shaped the family's savings into platinum clothing hangers, which, in haste they decided to leave behind. A maid, however, hid them in the trunk of their Hudson, an American-made car.

"They lived off those coat hangers," Bun said. "The maid thought they would need them."

Mark graduated from Stuyvesant High School in New York in 1947 and received his bachelor's degree in physics from the University of California, Berkeley, in 1951. He earned his Ph.D. in physics from the Massachusetts Institute of Technology in 1954.

Equally opposed to fascism and communism, Mark devoted much of his career to nuclear deterrence during the Cold War, including the development of secret technology for spying and enhancing America's nuclear capability. He was a protégé of Edward Teller, known as the "father of the hydrogen bomb."

Mark held a number of research and teaching jobs until 1964, when he became chair of Berkeley's department of nuclear engineering while directing the Berkeley Research Reactor. In 1969, he was named director of NASA's Ames Research Research Center in Mountain View, Calif.

In the late 1970s and early 1980s, he held positions in Washington, D.C., that included secretary of the Air Force, director of the top-secret National Reconnaissance Office, deputy administrator of NASA and director of Defense Research and Engineering at the Pentagon.

Mark and his family moved to Austin in 1984 when he was named chancellor of the UT System, a job he kept until 1992. Of his time in that office, Mark said he was most proud of establishing a medical school in the Rio Grande Valley and hiring trailblazer Diana Natalicio as president of UT's El Paso branch. The late Natalicio stepped down after 31 years in that position in 2019.

While he was called back to Washington periodically for research work, Mark's great love was teaching aerospace engineering in UT's Cockrell School of Engineering. His students, many of whom rose to leadership positions in academia, remembered his accessibility and humor.

"I teach them aerospace and then I tell them jokes," Mark told Kortsha. Michael Webber, one of his protégés, went on to be named the Josey Centennial Professorship in Energy Resources at UT.

"He reached down and grabbed me and said, 'You've got do better,'" Webber told Kortsha. "Don't give up and you'll like it. And it was true. ... This is part of being a professor: You can make someone feel very special. You can see something in the student that they don't see themselves. You can encourage them to strive higher, to achieve more. And I feel like that's what Dr. Mark was doing with me."

Hans and Bun Mark settled in Tarrytown, not far from the official chancellor's residence. He is survived by two children, James Randall "Rufus" Mark and Jane Mark Jopson, as well as five grandchildren and one great-grandchild.

A memorial will be held for Mark at Episcopal Church of the Good Shepherd on Jan. 15. Memorial gifts can be made to the Hans Mark Scholarship Endowment at the University of Texas.